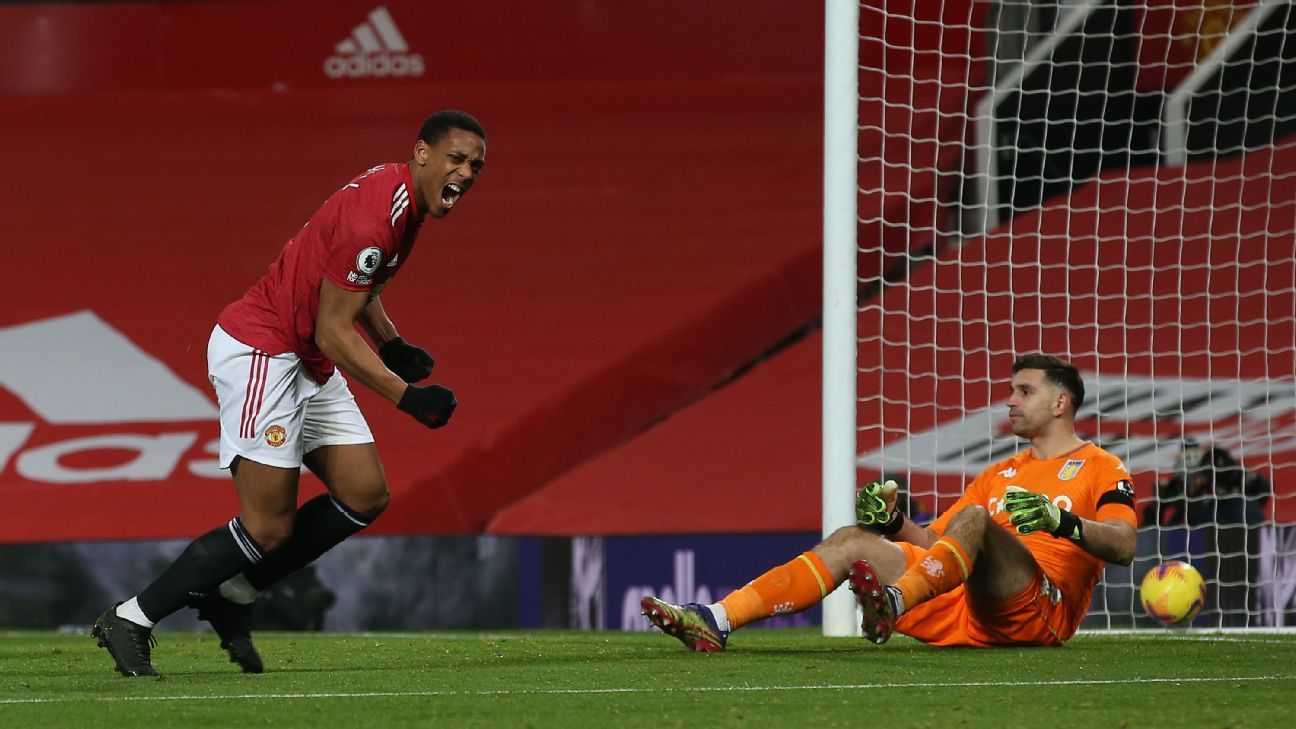 MANCHESTER, England — Ole Gunnar Solskjaer will tell you that Manchester United haven’t really hit top form this season, and that one of the reasons is Anthony Martial. It bodes well, then, that on the opening day of a year that could yield a first title challenge of the post-Sir Alex Ferguson era, it was the Frenchman who got the first goal as United beat Aston Villa 2-1 at Old Trafford.

Solskjaer needed another Bruno Fernandes penalty, three good saves from David De Gea, an impressive performance from Paul Pogba and a heroic block from Eric Bailly in the fifth minute of stoppage time to get over the line, but his team is now level on points with Liverpool at the top of the table after 16 games. At the very least, United have given themselves a chance of title number 21 in 2021.

Martial’s goal, just before half-time, was only his second in the Premier League this season, having waited until December to get his first. He averaged one every other game after Project Restart last season to help United finish third and secure a return to the Champions League, and if he can find that kind of form between now and May, Solskjaer will not be able to bat away questions about a title charge for much longer.

When one reporter began a question in the post-match news conference with, “You’re probably not going to talk about the title,” Solskjaer was quick to answer simply: “You’re right.”

The Norwegian is not the type to single out players in news conferences, but Martial has been the subject of a gentle nudge more than once. Solskjaer says he’s “been on at him” about his running stats during games and last season in particular urged Martial to score more “striker’s goals” of the type he used to collect regularly when he was a player at Old Trafford.

Martial’s goal here — his fifth in all competitions this season — was in exactly that mould, running across the front post to find space between centre-backs Tyrone Mings and Ezri Konsa to head in Aaron Wan-Bissaka’s low cross. It was a goal Solskjaer, Ruud van Nistelrooy or Dwight Yorke would have been proud of and important, too, against a team who arrived at Old Trafford with more clean sheets than any other team in the league.

“I love diving headers,” said Solskjaer afterwards. “Anthony will improve and be better. He’s had chances this season — he’s still getting them but he’s not had the luck. Tonight we saw a better version of Anthony, a more confident one.”

It’s been a difficult start to the season for Martial after picking up a three-game ban for his red card in the 6-1 defeat to Tottenham Hotspur in October and suffering a groin injury in December. Fit again, he is slowly finding his shooting boots with three goals in his past six games after scoring just twice in his previous 19 appearances for club and country. If he can get anywhere close to the 17 league goals he got last season, United should run Liverpool close.

“We’ve had some chats and we’ve spoken about last season and how important he was then and will be now,” said Solskjaer. “Good players know form is temporary, but he’s proven his class and he will get better and better.”

It helps, too, when your key playmaker is contributing every time he plays. Fernandes’ penalty in the second half, after Bertrand Traore had equalised, was the Portuguese midfielder’s 19th goal in his 30 Premier League appearances since arriving from Sporting Lisbon. No team has earned more points since Fernandes’ debut on Feb. 1, 2020.

Since losing to Arsenal on Nov. 1, United have gone 10 games unbeaten, winning eight and drawing two to take 26 points from the last 30 available. The trip to Liverpool on Jan. 17 is already looking like one of the most important league fixtures United have been involved in since Ferguson retired in 2013.

“I’m very happy with the position we find ourselves in, such a big difference to 12 months ago,” said Solskjaer. “You can lose the chance to be in the title race in the first 10 games. It’s a good position to be in but we need to get better. If you can win games like tonight it will make a big difference.”

Solskjaer is not yet ready to acknowledge that United look to be Liverpool’s obstacle to regaining the Premier League trophy, and the game at Anfield in a little more than two weeks will go a long way to deciding if their challenge is fleeting or more firm. For now, though, United are in their highest position on new year’s day since Ferguson’s last season, and Solskjaer insists there’s more to come — particularly from Martial.

Bundesliga 2022-23 season preview: Everything you need to know
Semi-automated VAR offside to be used in UCL
Brighton stun Manchester United in PL opener
Let’s not write off Haaland after one glorified friendly
Ajax ban signs asking players for shirts