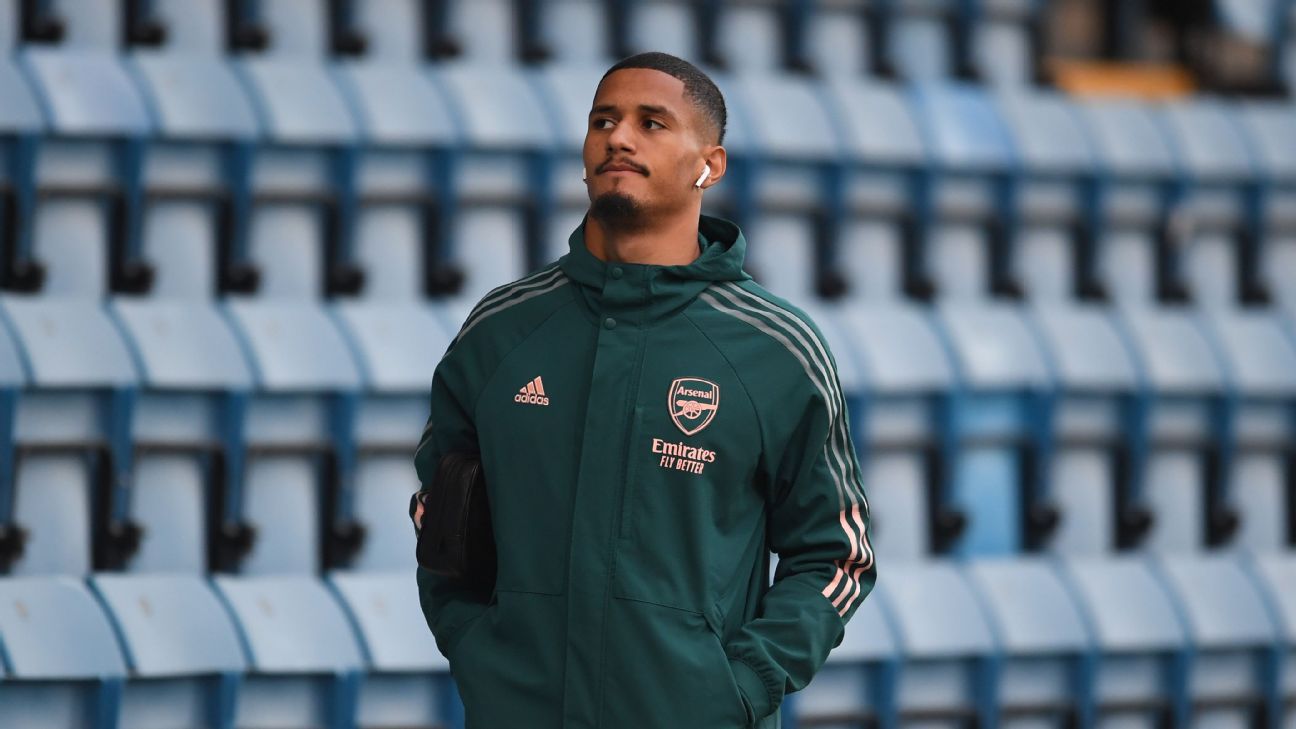 Arsenal manager Mikel Arteta has faced a barrage of questions during a difficult season to date, but the one asked with arguably the greatest urgency by disgruntled fans is: where is William Saliba? As of Monday night, the answer is “on loan at Nice,” meaning it will be at least two years after signing for the Gunners before Saliba plays a first-team game.

At a cost of approximately £27 million, he is the joint-10th most expensive signing in the club’s history, and one pre-ordained by supporters as the answer to longstanding defensive issues. Yet after arriving at the club in July 2019, he was sent back to Saint-Etienne for a further year before being left out of Arteta’s Premier League and Europa League squads with the Gunners boss citing a need for Saliba to undergo a “transitional year” prior to commencing his Arsenal career.

A second loan move back to Saint-Etienne collapsed at the end of the summer transfer window amid a row about paperwork, and Nice have this week stepped in to offer hope of a brighter 2021 for the 19-year-old. The Allianz Riviera will be Saliba’s home for at least six months — reports in France suggest that deal could be extended into the 2021-22 season if beneficial to all parties — leaving Arsenal fans facing an even longer wait to see whether Saliba can ever live up to the hype.

But how exactly has it come to this?

It’s difficult to underestimate the number of unforeseeable challenges Saliba has faced since Arsenal edged out Tottenham for his signature in the summer of 2019. Things had happened extremely fast even by that point; Saliba signed his first professional contract just a year earlier and made his debut in September 2018, the first of just 17 senior appearances before finding himself at the centre of a north London transfer battle.

During a trip to a fair in Paris, Saliba bumped into Arsenal midfielder Matteo Guendouzi, who helped convince him to join the Gunners in a deal that would see him return continue his development by returning to Saint-Etienne for the 2019-20 season. Sources close to the player describe him as “level-headed” and “generally unflappable,” but what followed was enough to test the sternest of souls. He underwent an operation on adductor muscle injury, which delayed his return to action until September, and a promising run of form was curtailed firstly by a metatarsal fracture in November and, later, the spread of COVID-19 across Europe, which brought Ligue 1 to a premature end in April with 10 games to play.

Saliba confirmed the promise many believed he possessed during 12 League appearances, demonstrating his poise by committing just two fouls in 991 minutes of action despite the further upheaval of Saint-Etienne head coach Ghislain Printant — the man responsible for giving Saliba his debut — being sacked eight games into the season, replaced by former Leicester boss Claude Puel. The year 2020 would also contain a family bereavement that made settling in England much tougher.

Before that, Saliba was the subject of a row between Arsenal and Saint-Etienne. The latter wanted to retain him for the Coupe de France final, rescheduled for late July and therefore beyond the initial loan agreement’s end date. Arsenal were willing to negotiate, but after talks collapsed, they released a statement claiming “we are simply not prepared to risk the welfare of an Arsenal player” as he was recovering from injury in an attempt to play in the Final against Paris Saint-Germain, and that “we also expected not to be financial disadvantaged by extending the loan.”

That second point was somewhat lost at the time amid what appeared an understandable desire to ensure their £27m man was up to speed for the new Premier League season. But given what has followed — not just Saliba’s omission, but the club making 55 non-playing staff redundant and instituting further cutbacks to scouting and operational staff — the financial aspect now feels more relevant given it refers to a €2.5m bonus payment Arsenal would have had to make if he started one-third of Saint-Etienne’s matches in the 2019-20 season.

Sources have told ESPN it was a clause Arsenal insisted on in an effort to guarantee he received the game time they felt Saliba needed to improve. Yet the Coupe de France final was Saint-Etienne’s 51st game of the season. Saliba had started 16 matches; if he’d started a 17th, it would trigger the £2.5m payment unless a compromise could be reached. It wasn’t.

An Arsenal spokesman insisted back then that the primary dispute was over Saliba’s medical treatment and therefore, the financial aspect was not discussed in any great detail. At that point, Saliba was telling friends that he was targeting a place in Arsenal’s first team for the 2020-21, having inherited the No. 4 shirt in a squad whose lack of quality at centre-back had become acutely obvious. But then he started training at London Colney.

Unai Emery was Arsenal head coach when Saliba signed for Arsenal. The decision to immediately loan him back to Ligue 1 was recognition he needed more experience of competitive top-level action, but Mikel Arteta, who replaced Emery as manager in December 2019, was expected to make him a central component of his new-look team, buoyed by ending the 2019-20 season with an unexpected FA Cup Final victory over Chelsea.

Saliba spoke almost no English when he signed for the club, but he quickly set about improving his language skills while also naturally gravitating to the French-speaking players in the squad, chiefly Alexandre Lacazette. Growing up as an Arsenal fan with vivid memories of past French grandees Patrick Vieira and Thierry Henry, Saliba was determined to make his mark. However, Arteta and his coaching staff quickly formed the view that Saliba was still some way off the required level.

This is a view met still with consternation in France, especially in light of many Arsenal players underperforming in what was (until the past 10 days) the club’s worst start to a season since 1974. How can Shkodran Mustafi get a game and Saliba can’t?

Yet sources have told ESPN that there are many at Colney who believe Saliba has plenty to learn in his positioning and has been found wanting by the intensity of Arsenal’s training matches. While he developed a reputation at Saint-Etienne for executing tackles with good timing and stepping out to win the ball, there are concerns the higher pace of play leaves him vulnerable too often and caught out of position.

Gab Marcotti points out the players Arsenal haven’t needed in their return to form.

Although an imposing figure at 6-foot-3, Saliba needs to improve both physically and in the air. Sources have told ESPN there are several players in the squad who agree with the view that it’s too soon to expose him to regular Premier League football.

More savage assessments include the suggestion he needs to drop down a division — Arsenal briefly discussed a loan move with Watford and Norwich before the deadline passed — but Arteta delivered the most withering judgement of all when he decided against registering him for Premier League and Europa League action. A loan back to Saint-Etienne failed at the 11th hour, with both clubs blaming the other as they missed the deadline; it left Saliba in limbo, with him playing just twice for the under-21s. His final appearance came in a 3-0 defeat at AFC Wimbledon in the EFL Trophy on Dec. 9. Saliba was sent off, his second yellow card earned for an over-zealous tackle.

Whatever doubts exist over Saliba’s ability, surely he would have held his own in — and benefitted from — games against Irish minnows Dundalk, Molde or Rapid Vienna. The Gunners won all six Group B games despite heavy rotation even as their domestic form began to wane. But Arsenal’s recent uptick in results, with three consecutive victories against Chelsea, Brighton and West Brom, have eased the pressure on Arteta, revalidating his conclusions on a range of issues including Saliba’s readiness. And so, instead of bowing to pressure and finding a place for Saliba in the squad, one of the first acts of this January window was to send him on loan to Nice, with sources insisting the Gunners believe the player who signed a £40,000-a-week contract until 2024 will still come good in Arsenal red.

The reaction among Arsenal fans on social media was predictably volatile and divisive, perhaps only marginally dampened by the club’s decision to confirm the news a minute into UK Prime Minister Boris Johnson’s live television address on Monday informing the country of a third national lockdown. Maybe that was a coincidence. But another round of ‘Where’s Willy?’ isn’t ideal for anyone.