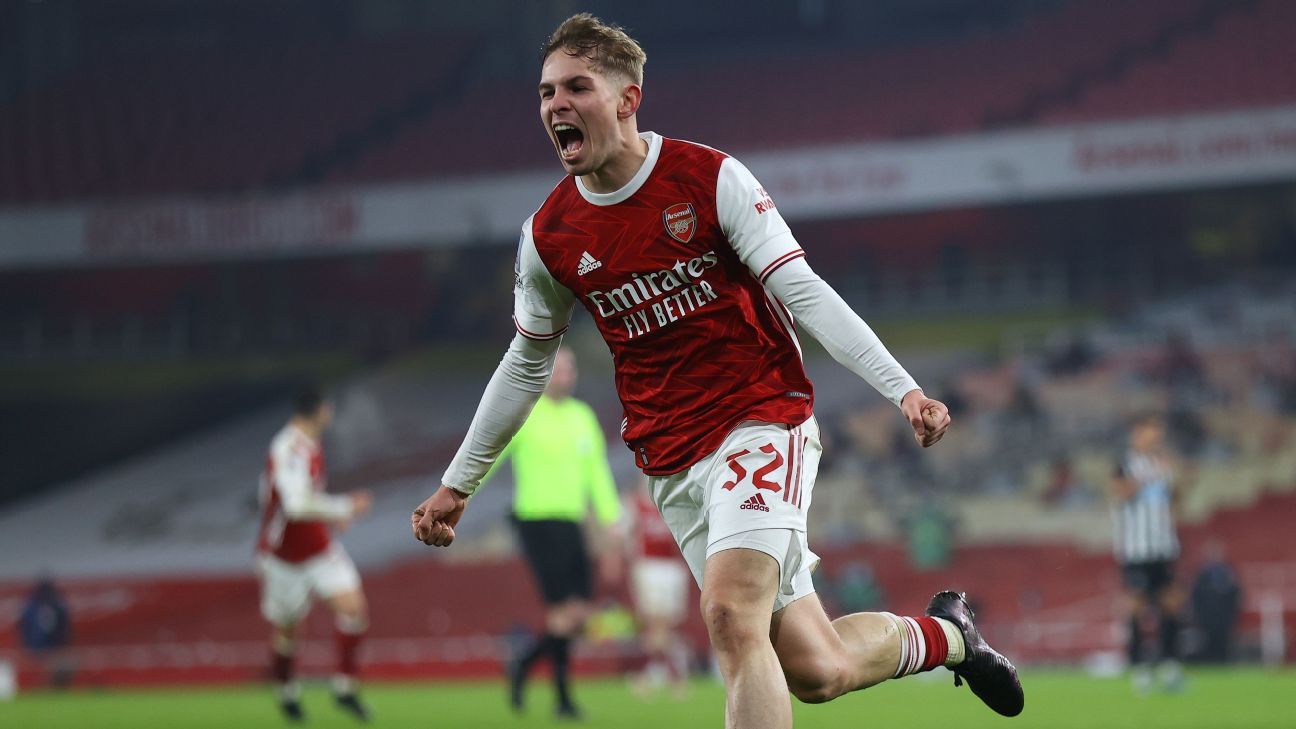 Most top teams use the FA Cup third round to test their young players but this 2-0 win against Newcastle underlined why Arsenal need them to thrive in the Premier League.

Emile Smith Rowe was a central figure in the Gunners’ revival over the festive period, during which they claimed three league wins that eased the pressure on manager Mikel Arteta, and the 20-year-old proved to be their saviour again on Saturday, coming off the bench to score the opening goal 19 minutes into extra-time.

Arsenal had largely laboured to that point, particularly during a first half that underlined how the club’s Hale End academy has been the source of its revival. This was a dismal night for Willian in particular, the latest in an alarming number of poor performances since his summer arrival on a free transfer from Chelsea.

Operating in a central position, as a No. 10 when Arsenal adopted a 4-2-3-1 shape or on the left of a midfield trio in a 4-3-3, the Brazilian international looked to be either bereft of confidence or unsure of exactly what is being asked of him.

Still, at least the 32-year-old has the thick end of a three-year contract to work things out and Arteta did offer up the excuse that Willian has been struggling with illness and missed two weeks of training. Given his reputation, though, he needs to improve and fast; he lasted 66 minutes here before being replaced by Bukayo Saka, who has set the benchmark for Arsenal’s youngsters that Smith Rowe is rapidly showing he is capable of matching.

The game appeared to be drifting towards penalties before Smith Rowe gave the ball to Saka, who clipped a ball into another substitute, Alexandre Lacazette. The French forward’s clever, cushioned header fell inviting for Smith Rowe and he steadied himself before firing a right-footed shot in off the post.

It capped a remarkable personal turnaround for Smith Rowe, given his night appeared destined to end in misery after referee Chris Kavanagh showed him a red card for a lunging tackle on Sean Longstaff. After a polite word from VAR, though, the match official downgraded his decision to yellow and Arsenal ultimately took advantage.

“We believe in him,” Arteta said of Smith Rowe. “He is doing really well and becoming more and more important to the team. Today he showed that again, the way he came on, the personality that he played with. We asked him to be more in the box and today he scored a really important goal for us.

“In difficult moments to step in like the young players have done, it is not easy. They need senior players around them, the players who have experience and the players who can play a central role in the team around them. I think we have a great mixture. We are building slowly but we have the talent and the right characters.”

Smith Rowe and Saka have given dynamism to Arteta’s static attack. It was a measure of their importance that both were rested here but Nicolas Pepe, Arsenal’s £72 million club-record signing, joined Willian in failing to take his opportunity to impress with another peripheral display.

Arteta has admitted he needs to be careful in over-burdening his young talent but needs must; Smith Rowe and Saka must start against Crystal Palace in the league on Thursday as Arsenal look to revive themselves after a dreadful start to the campaign.

Confidence is a capricious commodity, especially in such a fragile squad, so Arteta is no doubt aware of the need to ride the wave of positivity created by the fearlessness of youth. Others have more work to do, however.

Reiss Nelson and Joe Willock struggled to impose themselves despite Newcastle showing only a limited attacking intent, chiefly through Andy Carroll, who lasted 90 minutes — in fact, 105 in total — for the first time since December 2019 and missed two chances that might have earned the visitors victory in the first 90 minutes.

In mitigation, Nelson was only drafted into the starting line-up around 20 minutes before kickoff due to Gabriel Martinelli rolling his ankle in the warm-up. An Arsenal spokesman initially claimed the late change was merely precautionary but Arteta was more downbeat afterwards ahead of a scan in the coming days.

“I am gutted,” he said. “I was in my office before the game and one of the coaches came in and said that Gabi hurt himself, that he twisted his ankle. I went to the medical room and he was in tears. He was in a lot of pain and we are going to have to see how he is, but he didn’t look good. He was in pain, so I imagine we are not going to have good news with him.”

Credit must go to a couple of the Arsenal senior players, with Granit Xhaka making a positive impact upon his introduction as a substitute and Kieran Tierney maintaining a superbly consistent level from left-back.

The Scottish international’s quality in the final third settled any lingering nerves when, with three minutes left, he found another pinpoint cross for Pierre-Emerick Aubameyang to score only his second goal in nine appearances dating back to Nov. 1.

Last season’s FA Cup win provided Arteta tangible evidence to recommend persevering with him during the pre-Christmas period when criticism of his management was at its most intense. Losing the chance of a repeat so early in the campaign would have been a substantial setback but for the time being, as long as the kids are alright, Arteta is too.