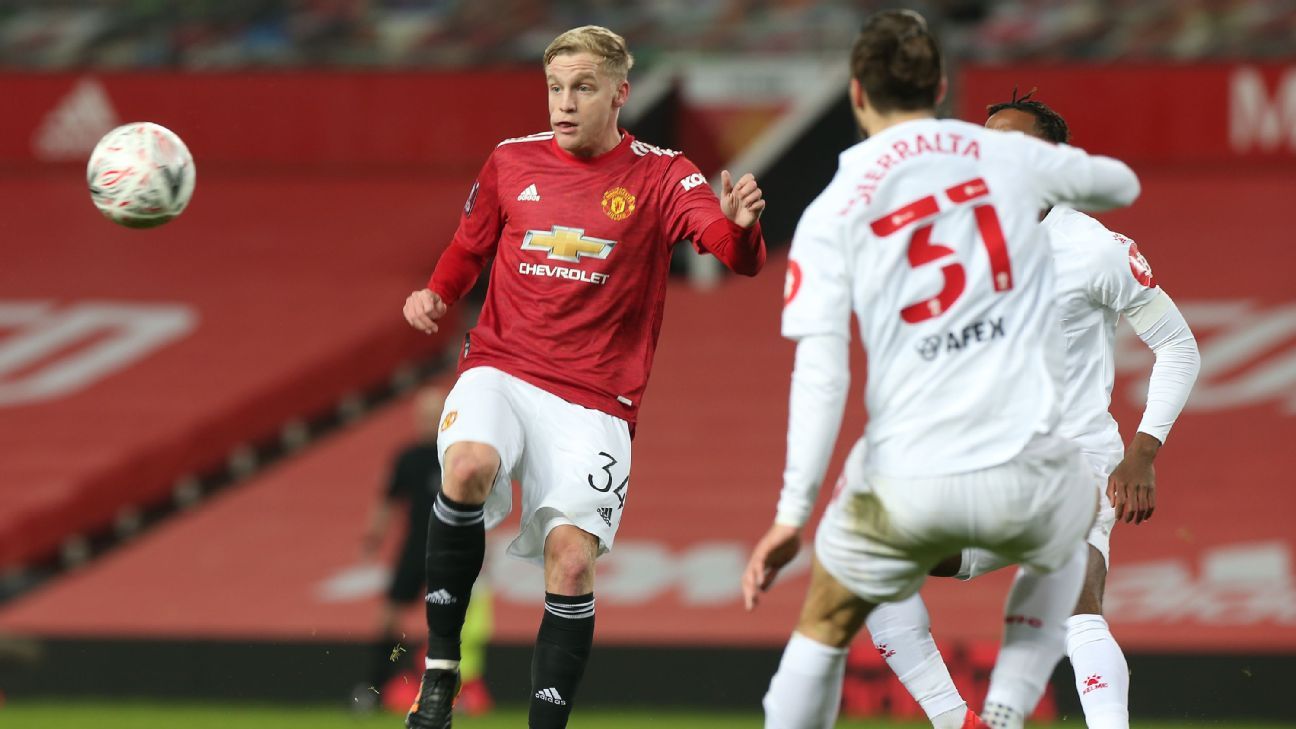 MANCHESTER, England — Ole Gunnar Solskjaer urged Donny van de Beek to take his “opportunity” against Watford in the FA Cup and the Dutch midfielder, enduring a difficult first season at Manchester United, can be satisfied he took it. It is more than a month since Van de Beek started a game at Old Trafford but in helping United reach the fourth round with a 1-0 win against the Championship side, sent his manager a reminder that he did not move from Ajax in the summer to sit on the bench.

He did not score or register an assist — captain for the night Scott McTominay headed in Alex Telles‘ corner after five minutes for the only goal — but he didn’t need to. Rather, it was his quickness of thought, smooth movement and calm under pressure, particularly during an impressive first-half performance, which set him apart from almost everyone else on the pitch.

One moment in particular, a delicate back-heel on the edge of the Watford penalty area that sliced through William Troost-Ekong and Marc Navarro to create a chance for Juan Mata, was the type of ingenuity that Solskjaer’s team have often appeared desperate for this season.

“I think Donny showed again his qualities,” said Solskjaer afterwards. “He’s very technically clean and he makes good decisions like the flick to play Juan through. He’s got that quality to open up tight games and he’ll benefit from this game.”

This was just Van De Beek’s ninth start since his £40 million transfer in the summer. Solskjaer insists his handling of the 23-year-old is just part of the process of settling in at a new club in a different country but it has still been a surprise that he has been used so sparingly.

He has started just two of 16 league games and was substituted at half-time against West Ham in December. In all, he has managed just 251 minutes in the Premier League this season, fewer than 18 of his United teammates.

Van de Beek’s lack of playing time even prompted Holland legend Ronald de Boer to suggest Van de Beek should “declare that he should be loaned or even sold” during the January transfer window to ensure he plays enough games between now and the end of the season to keep his place in the Netherlands national team for the European Championships this summer.

United have received enquiries from clubs interested in taking Van de Beek on loan this month but Solskjaer remains determined to keep the bulk of his squad together ahead of a busy second half of the season. The Norwegian has told Van de Beek privately how much he is valued and pointed to Victor Lindelof and Fred as two players who had to be patient following their moves to United before establishing themselves as first-team regulars.

It is likely Van de Beek will return to the sidelines as United begin one of their most important weeks since Sir Alex Ferguson retired. Victory at Burnley on Tuesday would see Solskjaer’s team travel to Liverpool at the weekend top of the table and a positive result at Anfield would only heighten belief that lifting the title is a realistic goal.

Even after completing more passes (70) and winning more tackles (three) than any other player against Watford, Solskjaer is almost certain to go with a midfield combination of Bruno Fernandes, Paul Pogba, Fred and McTominay — the Scot outstanding himself as United made it 34 wins from their last 36 FA Cup third round ties — when he comes to pick his team for Burnley and Liverpool. They will have to be better at Turf Moor though after struggling to see off Watford despite a good start.

“We’re very happy to get through,” said Solskjaer. “We started really brightly. I expected it to be the other way round, to find our rhythm later on, but after a very good start, we lost our shape and lost too many balls. We’re through, that’s the main thing.”

Given Van de Beek’s difficulty in getting regular league games, it could be the next round of the FA Cup that he gets his next opportunity. He can be confident he gave his manager a nudge with his performance against Watford but he is yet to reach the point where he is bulldozing his way into the team.

Solskjaer is convinced that will happen eventually and that any talk of Van de Beek having to look elsewhere to fulfill his undoubted potential is premature. Van de Beek will hope that soon cup ties against Championship opposition are the type of fixtures he gets to sit out, like Fernandes, Pogba, and Fred this time. For now, though, he needs the FA Cup to make his point to Solskjaer. He can at least be happy he didn’t waste a rare chance to make an impression.