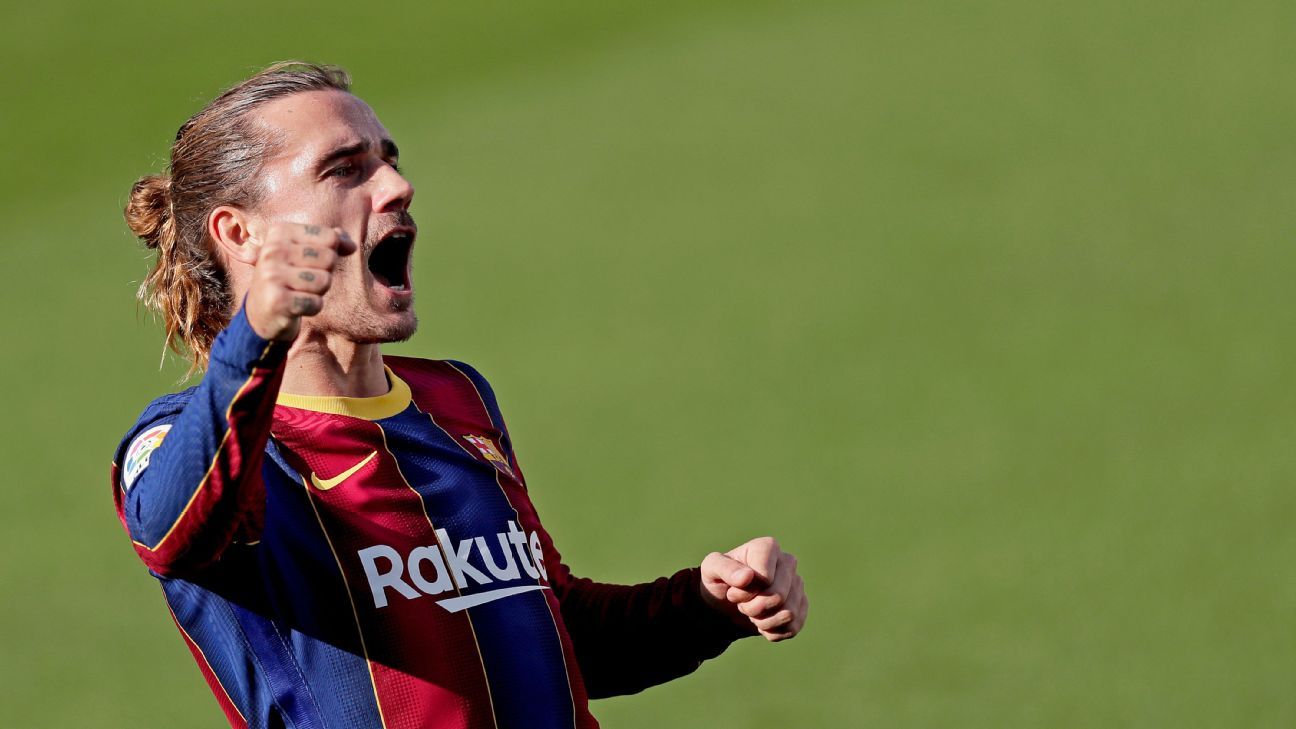 If Antoine Griezmann proves to be the standout player in this week’s Spanish Super Cup semifinals and showpiece final, none of us can claim we weren’t given forward notice. And only partially because of the France international’s splurge of assists and goals in his past two matches, which seem to have rescued his season and, perhaps, even his future at Barcelona.

Yes, it’s true: those two assists for Lionel Messi rolled off Griezmann’s boot as if he’d transplanted some Luis Suarez DNA there, as if Barcelona’s No. 10 and No. 7 were symbiotic footballing siblings — not the two proud winners who, for many months, have looked as if they’d literally been cursed never to quite understand each other.

The man from Macon also conjured up one of the outstanding goals of his entire career at Granada on Saturday, darting into the penalty area, taking Ousmane Dembele‘s neat dink pass on his left instep and then, with less angle than a sand salesman in the Sahara, smashing the ball into a minuscule gap between Rui Silva and his right-hand post. It was obscene — in a good way.

Nevertheless, there were even bigger warnings that Griezmann will probably put his old club, Real Sociedad, to the sword on Wednesday in Cordoba (2:50 p.m. ET, stream live on ESPN+) then win Barcelona the Super Cup final in Seville against either Real Madrid or Athletic Bilbao. Bear with me, I’ll explain.

You see, Griezmann loves semifinals — like Paul McCartney quite likes a tinkle on the piano, Hollywood likes a sequel and Popeye was a bit partial to spinach. Griezmann has a massive habit of either producing a little bit of solo sweetness or inspiring his team to a victory whenever a semi (and often a final) comes along.

Frankly, we probably should have expected that the last few days would produce signs of him warming up for something special. Allow me to elaborate.

Griezmann has played in, and/or won, the semifinals of the European Under-19 Championship, the Under-20 World Cup, the European Championship, the World Cup, the Champions League, the Europa League, the Copa del Rey and the Spanish Super Cup. And the fact is that he almost always produces. His record is stunning. At professional level it begins with knocking Croatia out of the U19 Euro semifinal (then winning the final against Spain) in 2010 and ends with scoring in Barcelona’s 3-2 Super Cup semifinal defeat to Atletico Madrid in Saudi Arabia this time last year.

In between, Griezmann has: tucked away both goals in a 2-0 win over Germany in the Euro 2016 semifinal; set up Sam Umtiti with the winner in the 2018 World Cup semifinal victory over Belgium; provided an assist to Diego Costa so that Atleti knocked Arsenal out of the 2018 Europa League semifinal (Griezmann scored two in a man-of-the-match final win); scored the decisive away goal in Munich that meant Diego Simeone’s Atleti, not Pep Guardiola’s Bayern Munich, went through to play Madrid in the 2016 Champions League final; scored in the ultimately futile 2-1 win over Madrid in the 2017 Champions League semifinal; cancelled out Messi’s opener in the 1-1 draw Real Sociedad earned in the 2014 Copa del Rey semifinal against Barca; scored for Atleti in the 2-1 home defeat to Barcelona in the 2017 Copa del Rey semifinal and given an assist to Kevin Gameiro in the away leg a week later (1-1).

And when it comes to the blue-ribbon matches (irrespective of it still being an extremely sore subject for him that he missed a penalty in normal time against Madrid during that 2016 Champions League final, he still slotted his shootout penalty that roller-coaster night), he scored in the 2018 World Cup final defeat of Croatia, got that brace in the 2018 Europa League final and produced the assist from which Mario Mandzukic won Atleti the 2014 Spanish Super Cup against rivals Real.

These are world-class stats that go beyond underlining his talent and hunger, they scream big-match nerve.

So, given this previous immunity to pressure, what they heck has been wrong with him, or his environment, since he moved from Atletico to Barcelona in 2019? A central point is that Griezmann’s been chasing the golden image of a non-existent Eldorado — pursuing something at Camp Nou that he perceived from a distance But the reality has not only proven to be something radically different, it’s taken him a huge amount of time to come to terms with a lost dream.

When I met and interviewed him halfway through his first season at Barcelona, he raised a couple of very influential subjects. First, that he expected to take a long time to settle in, something he wasn’t ashamed to mention.

“I’m really shy and don’t usually talk to the others because of my shyness,” he said. “I’m not the sort who’s going to start up a conversation because I’m too timid. That will only improve over time. I noticed a change in my second year at Atleti. I said, ‘This is the player I want to be!’

“When I play football, when I’m on the pitch, I do what’s natural for me. I don’t think a lot. For example, if I’m not doing well or I’m sad in my private life, it reflects on the pitch.”

Had he been more confrontational, more ruthless, more of a schemer and plotter rather than a guy who feeds off sheer hard work and good vibes, then adapting to the form he’s shown these past couple of gams would have been more rapid.

In that interview, he also made clear his belief that he was coming to try to graduate in the highly scientific, geometrically challenging football skills that he’d both admired, and suffered, while playing against Barcelona in the days of Xavi, Andres Iniesta, Neymar, David Villa, Dani Alves and peak Messi and Sergio Busquets. That Eldorado I mentioned.

“I didn’t leave Atleti to win the Champions League or to lift more trophies,” Griezmann said. “I came to Barcelona to learn a new style of play, a new philosophy. It was all about learning at a club that conceives football in a different manner.”

Sadly for him, by the time he reached Camp Nou, that era was gone.

Not only was the squad itself in notable decline, the very concept of positional-possession football, the absolutely fine-tuned, hard-to-play-against, brutal-to-learn Guardiola-Cruyff ideal had been abandoned. Griezmann was like an ultra-eager freshman looking to learn nuclear physics from a school that had just moved on to brick laying and plastering.

Griezmann carries the terrible burden of being one of football’s nice guys. Maybe a little Peter Pan in some of his outlooks, possibly too timid, too shy for a 29-year-old, but unquestionably bursting with ability, genuinely a decent man and someone who’s been frantically casting about for answers as to A) how to reproduce his own best form and B) how best to make his partnership with the notoriously demanding, notoriously saturnine Messi thrive.

So, with respect to Sir Alex Ferguson, who coined the phrase “Football, bloody hell,” here Griezmann is again. Playing in a 4-3-3 formation that simply did not suit him when he first joined, spending decent chunks of the past two games wide on the left (ditto), but suddenly looking not only as if he can play at his best level but as if he can be immensely valuable to Ronald Koeman’s Barca because of his simply immense work ethic.

The covering work, the tackling, the pressing, the jockeying of opponents, the defensive diligence that he had pounded into him at Atleti were all like salt in a raw wound when other things, headline things, weren’t clicking. The value of each selfless, determined piece of ancillary work to help the team in months gone was corrosively undermined by the thought that: “Where are the goals and assists for which you were bought?” And now? Now that Griezmann’s presence up front for Barcelona looks symbiotic with Jordi Alba, seamless with Dembele, joyful with Messi and shimmering with self confidence when he’s near the goal, those extra elements of his game elevate him to something very close to the €120 million-valued world champion the Camp Nou club thought they were buying.

He’s got a decent record of scoring against his ex-club, but no one in Koeman’s team can possibly be in any doubt that if they play like they have in long spells over preceding months, La Real have the capacity to knock them out and curtail this groovy resurrection story by Wednesday night.

As for the other two rivals, should Griezmann produce and progress, well he’s quite enjoyed playing Athletic and Madrid over the years. Los Leones and Los Blancos are two of the three rivals against whom he’s pitted himself most often, scoring 16 goals in 20 wins, 20 defeats and 13 draws against the pair of them.

So, my suggestion is that, by Sunday night in Seville’s Cartuja Stadium, Griezmann might well have been a force in lifting his first trophy for Barcelona — it’s his calling card. That said, we have two enthralling semifinals, a possible upset all-Basque final, a possible Clasico final or the first rematch of a Barcelona side against a Marcelino-coached team since the Asturian’s vibrant Valencia blew the Blaugrana away in the 2019 Copa del Rey final.

This promises to be a special week of Spanish soccer. Don’t, on any account, miss it.

Tottenham sign Udogie, loan him back to Udinese
Dortmund late comeback sees off Freiburg
LaLiga 2022-23 preview: Will Barcelona topple Real Madrid? What to watch for ahead of new season
Barca held to 0-0 draw by Rayo in LaLiga opener
Chelsea’s Cucurella balks at haircut: ‘My style’