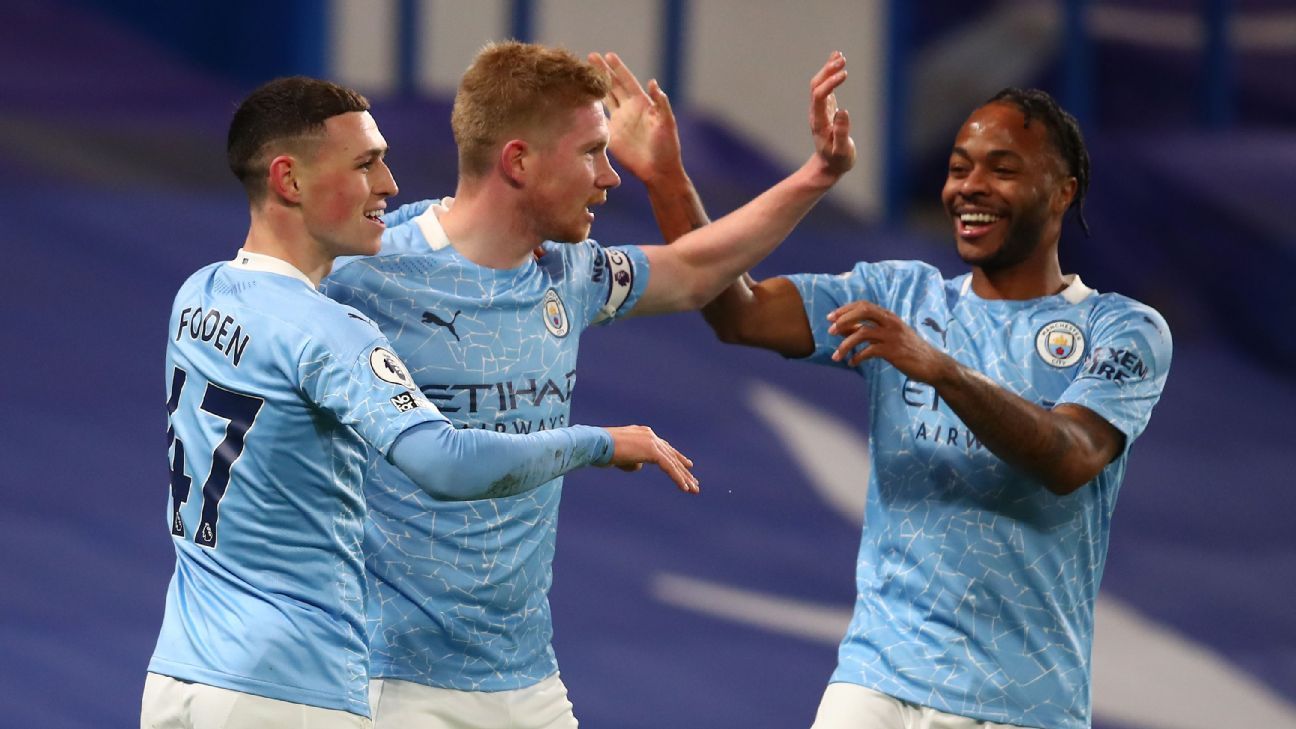 Manchester United can go top of the Premier League on Tuesday. Just a point against Burnley at Turf Moor will enable Ole Gunnar Solskjaer’s team to go into Sunday’s clash against Liverpool at Anfield with the champions trailing in their wake, raising hope within Old Trafford of a genuine title challenge this season.

Sounds great, doesn’t it? The Premier League’s two biggest and most successful clubs — a pair of titans with 39 league titles between them — finally slugging it out, head-to-head, for the right to become champions of England. Since the Premier League began in 1992-93, United and Liverpool have not often been competitive at the same time, so a true race for the title between the two clubs would be a rare event.

But hold on for just a moment. As enticing as it is to imagine United and Liverpool fighting it out over the next four months, recent form suggests the team to watch in the second half of the season is actually Manchester City. While all eyes are beginning to focus on the reds of Liverpool and Manchester, it is the blues of City who are beginning to click into gear most convincingly, yet Pep Guardiola’s team continue to glide under the radar.

All of the talk has been of United going top if they avoid defeat at Burnley — maybe because of the novelty value of such an occurrence, considering United have been among the also-rans pretty much since their last title win, under Sir Alex Ferguson, back in 2013. But if City win their two games in hand on Liverpool, they will also go above Jurgen Klopp’s team. If results go their way this week, City could even be top of the table as early as Sunday and history shows that, when City go top, they tend to stay there.

Less than two months ago, after losing 2-0 at Tottenham Hotspur on Nov. 21, City were languishing in 11th position in the table, with just three wins from their opening eight games. Having collected 12 points from a possible 24, the club had made their worst start to a season for 12 years. The goals had dried up, with just 10 scored in eight games, while defensive problems had seen City post a negative goal difference, with 11 conceded during that run.

Seven weeks on, however, they have scored 14 goals in the subsequent seven league games and conceded just twice. City now have the best defensive record in the Premier League and, although nine teams have scored more than Guardiola’s men, the attacking wheels are now beginning to turn more fluently at the Etihad — City have hit five in their last two league games — so it seems that the pieces are beginning to fall into place.

Subtle changes have been big factors in City’s return to form. John Stones, a player whose City career looked to be drifting to an unsatisfactory end following two difficult seasons, has started six of the seven league games since the Spurs defeat and formed a hugely promising partnership with Ruben Dias, the €68 million summer signing from Benfica. Stones and Dias have given City solidity and consistency at the back and, in turn, given the team the platform to attack with the confidence that the back door is now firmly shut.

As a team, City have also settled down and become sharper. Some of Guardiola’s players, including Raheem Sterling and Kevin De Bruyne, had less than two weeks rest in the summer due to international commitments coming so soon after City’s Champions League campaign ended in Lisbon in mid-August. It was a similar story at United, with Marcus Rashford another high-profile player who had a limited summer break, and Solskjaer’s team also started slowly.

While rivals such as Liverpool and Tottenham benefited from extended rest periods in between seasons which have been squeezed by the COVID-19 pandemic, City and United had to play catch-up when it came to fitness, which may explain the wildly fluctuating early performances and results. City lost 5-2 at home to Leicester City, while United were trounced 6-1 by Spurs at Old Trafford. It is noticeable, with both teams, that they are now much tighter at the back and more convincing going forward.

Last week’s 3-1 win at Chelsea was an example of City’s new-found fluidity. With De Bruyne deployed as a false No. 9, they tore Chelsea apart without a recognised striker, due to Sergio Aguero‘s ongoing fitness problems. Aguero’s contract ends this summer, but City are now starting to show they can thrive without the Argentina international because they have so many attacking options including De Bruyne, Sterling, Gabriel Jesus, Phil Foden and Riyad Mahrez.

City’s attacking threat is in direct contrast to the gear-clunking at Liverpool. The 7-0 win at Crystal Palace on Dec. 19 appeared to be a warning to the rest of the league, but it proved to be flash in the pan, with Klopp’s players managing just one goal in the subsequent three games against West Bromwich Albion, Newcastle United and Southampton.

Liverpool have won five, drawn five and lost two of their last 12 games in all competitions. Only four times in that run have they managed to score more than once in a game and it is that failure to find a second goal that is threatening to de-rail Liverpool’s hopes. Yes, they have suffered a catalogue of injury problems to key players such as Virgil van Dijk, Joe Gomez and Thiago Alcantara. The loss of Diogo Jota to a knee injury has also impacted on Liverpool’s goal-scoring threat. But there is also a sense of fatigue, mentally and physically, with Liverpool that does not appear to be affecting City or United right now.

The weeks ahead also play in City’s favour, however. They face Brighton & Hove Albion and Crystal Palace at home this week before a difficult clash against Aston Villa on Jan 20. But they will expect to win games against West Brom, Sheffield United and Burnley before travelling to Anfield on Feb. 6.

By then, City are likely to be top of table, judging by the fixture lists facing Liverpool and United. Liverpool face United and Spurs, and have a tough trip to West Ham United, before they play City, while United have their game at Anfield, plus a trip to Arsenal and a home game against Everton, during the same period.

United are certainly in a better position to challenge than at any time in the post-Ferguson era and back-to-back wins at Turf Moor and Anfield this week will confirm their status as a genuine force in the title race. But everything is pointing towards City being the team they all have to beat, despite the appetite for this season to boil down a run-off between Liverpool and United.