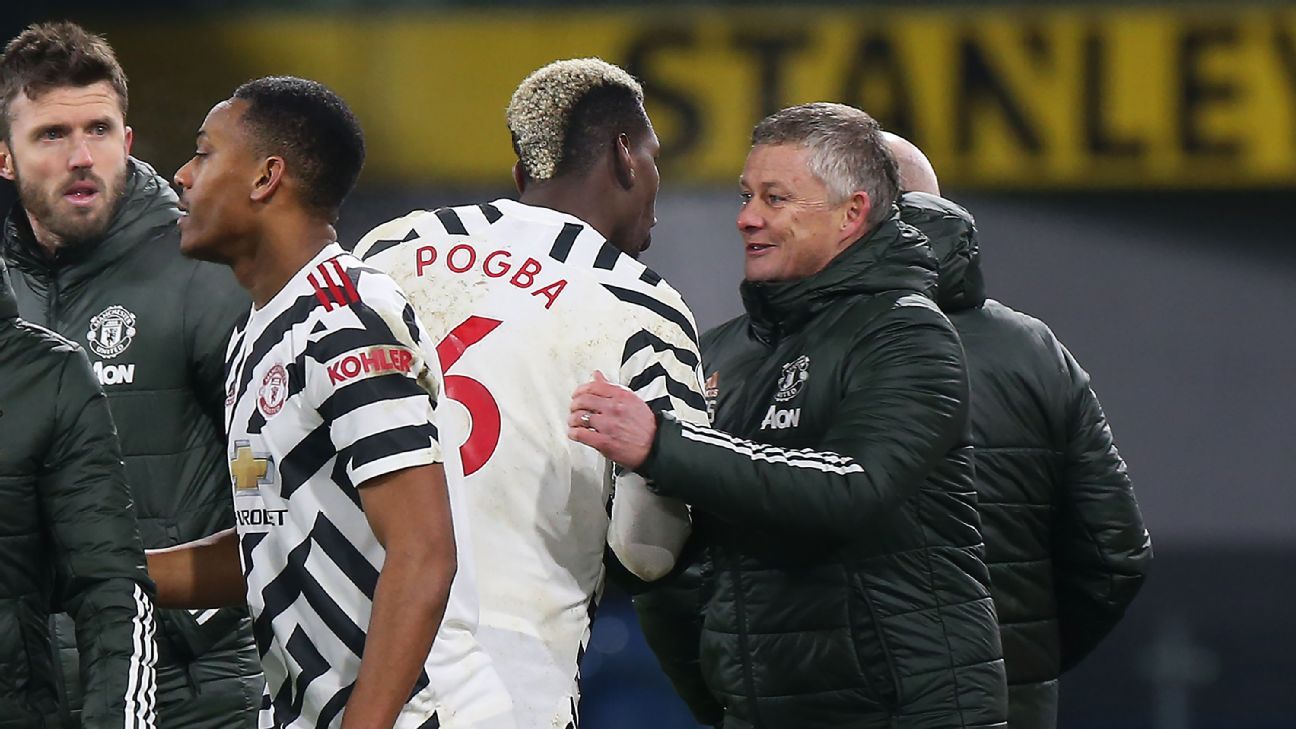 It was ugly, cold, wearying, full of incidents and, ultimately, resolved by a piece of individual brilliance, but when referee Kevin Friend blew his whistle after seven minutes of injury time (including three minutes of time added on to the time added on), there was one over-arching takeaway. Manchester United were top of the Premier League in January.

Not joint-top, not pretend-top, not goal-difference top, not top-if-they-win-their-games-in-hand-top, but top-top.

You have to go back all the way to 2013 (and the end of the Sir Alex Ferguson Era) to find the last time United were this high at this stage of the season. That’s a long time ago. Seven-and-a-half seasons without being top after the turn of the year… the last time the club suffered a longer drought of that kind was in the 1970s — which, you may recall, was also when they were relegated.

What does it mean?

Here, you drift into psychology and intangibles. It’s easy to define what it does not mean. It does not mean they will win the Premier League, or even that they’re first or second favourites to do so. (That would be Man City and Liverpool.) It does not mean they’re particularly good, or they will be particularly good in years to come, or that the successful title-winning side that United fans dream of will look much like this one. But it does mean that a psychological barrier has been broken, and it’s something Ole Gunnar Solskjaer can leverage to his — and United’s — advantage.

It’s also, to some degree, a vindication of the club’s decision to turn to him to replace Jose Mourinho and, effectively, bringing things in-house by hiring a former player who “understands” the culture at Man United rather than another pedigreed coach from elsewhere, And, in that sense, it’s not dissimilar to the choices big corporations make when their boards turn to new leadership.

When a multinational needs to replace its CEO, it has two options, broadly speaking. It either promotes from within, doubling down on its corporate culture, or it brings in a fresh approach, turning to a proven executive who can act as a disruptor and shake things up for the better.

The club’s four managerial appointments post-Sir Alex fall fairly neatly into either category. While David Moyes had no formal United connection, he was very much a “continuity candidate.” He was hand-picked by Sir Alex, he had spent the previous 11 years coaching 30 miles away at Everton, and he included club stalwarts Ryan Giggs and Phil Neville in his coaching staff.

Mourinho and Louis Van Gaal (who came after Moyes) had won a combined 15 league titles and three Champions Leagues when they were appointed. They were brand names, and they were proven; they were “disruptors” in the good sense, the tech startup sense. They were there to change a culture for the better, and it’s no coincidence that after being sacked, both did what superstar CEOs do when they’re brought in with great fanfare to turn a company around, only to be shown the door a few years later: they complained about an unwillingness to change, a lack of support internally and entrenched structures that made progress impossible.

Whether they were right or wrong isn’t the point of this column and, in any case, has been endlessly debated elsewhere. The point is that after hiring back-to-back bosses with fancy resumes who were brought in to tell the club what they didn’t necessarily want (but maybe needed) to hear, United did a 180 with Solskjaer. After the “disruptor,” enter the “company man.”

It’s not a knock, by the way. Carlo Ancelotti, with his three Champions League crowns, freely and proudly describes himself as a “company man” too. And that’s how Jan Aage Fjortoft, who played with him at international level and has known him for a quarter of a century, described Solskjaer when we had him as a guest on the Gab + Juls show this Monday.

Solskjaer’s public persona — earnest, unfailingly polite, avoiding confrontation — is that of an on-message corporate suit. Behind the scenes, no doubt, he can crack the whip — nobody sticks around in coaching if they don’t occasionally play the bad cop — but more than anybody, he has “toed the party line.”

Take United’s transfer business. Goodness knows he’d have plenty to moan about there. Take Paul Pogba‘s future (undecided) in the last 18 months of his contract, Jadon Sancho still playing for Borussia Dortmund, Bruno Fernandes arriving six months late, losing a center-forward like Romelu Lukaku without bringing in a replacement until January (and then, when the replacement arrives, it’s Odion Ighalo)… the list goes on and on. But he doesn’t. And it suits the club’s powers-that-be (Ed Woodward and his close-knit advisers, as well as the Glazer family) just fine.

If you’re a cynic, and many were at the time, you might have read Solskjaer’s appointment and subsequent long-term contract as the club taking the easy way out. Liverpool and Manchester City were in the ascendancy; trying to close the gap quickly would have been expensive, stressful and probably futile. So you peddle some tropes about United DNA and hire a guy who everybody likes (or, at least, nobody dislikes), is fully invested in club culture and won’t create headaches or controversy.

Craig Burley says Manchester United have surprised him so far, but doesn’t see them as title favourites.

is that overly cynical? Maybe. But as Fjortoft himself hinted, Solskjaer is under no illusion about why he got the job and that it wasn’t his body of work as a coach that secured it. The most important thing is that now that he’s there, it doesn’t matter why he was chosen: he will rise or fall based on results, and because results have been mixed, he’s endured the weekly spin cycle. United DNA! #OleOut! Top of the league! PE Teacher!

The best Solskjaer can do is keep going. He’s not a “big idea” coach like Jurgen Klopp or Pep Guardiola — if he is, we haven’t seen it — and he’s not a charismatic “cult leader” like Mourinho or Diego Simeone. He’s a man-manager who executes schemes that are basic, but effective, when executed properly and who looks to put his most talented players in situations where they can do the most damage. Zinedine Zidane won three Champions Leagues and two Liga titles doing just that at Real Madrid.

Of course, Zidane had more charisma, a better-run club with a more recent history of success and, crucially, better players at his disposal. But that’s the model Solskjaer’s United seems to be pursuing, whether it’s because it’s the path of least resistance after Van Gaal and Mourinho or whether they truly believe it’s the best option.That sort of model is built upon sporting capital and credibility.

By restoring United — even if it turns out be only for a short while — to the top perch, Solskjaer has taken a big step forward, taking pressure off himself (and off those who appointed him) and buying himself time. Time to work and make a difference. It’s one of the most precious commodities a manager can have.

USMNT’s Hoppe signs for Middlesbrough
MLS beats Liga MX but All-Star Game a win for both leagues
Is Neymar finally turning his PSG career around?
Ancelotti: Real Madrid can improve on last year
Sources: Thiago out for up to six weeks