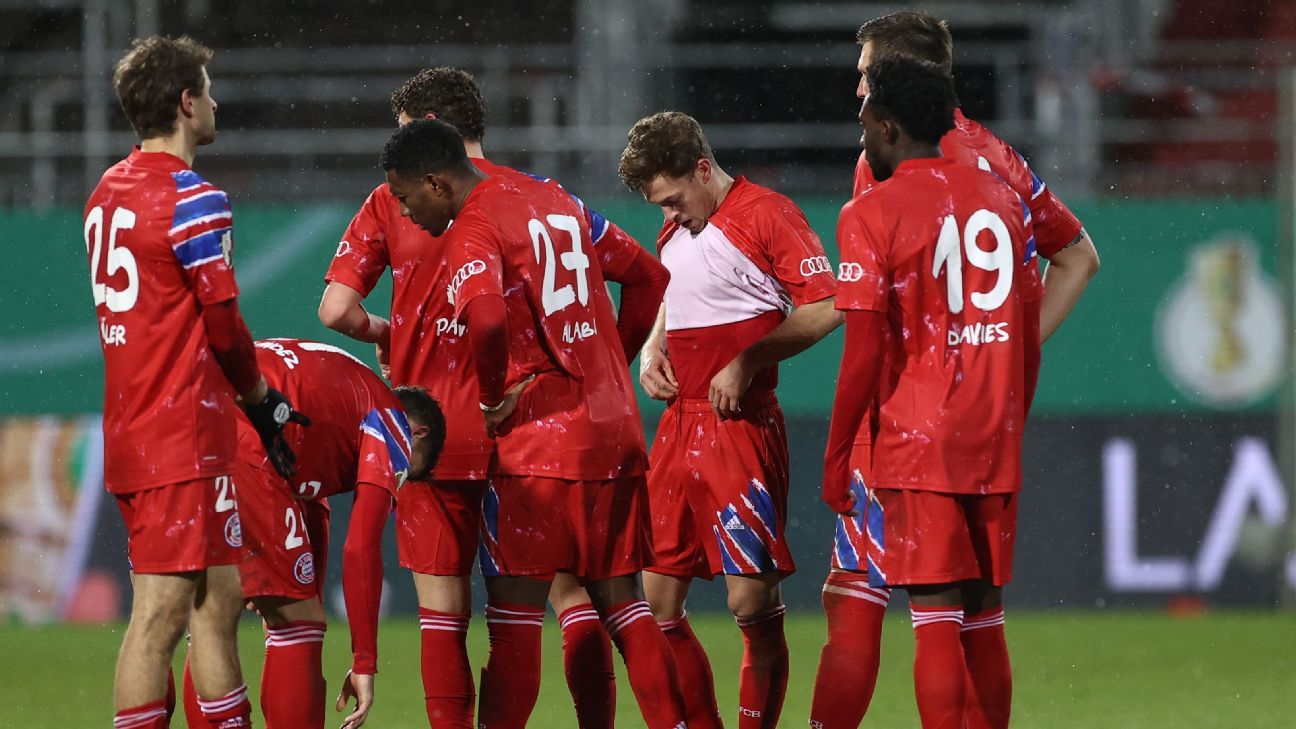 Ahead of his live commentary on Bayern vs. Freiburg on Sunday for the Bundesliga’s world feed and on ESPN+ (9:30 am ET in the U.S.), Derek Rae says the Bavarians are suffering a defensive crisis and face highly dangerous opponents. Wednesday’s DFB Pokal exit to second-tier side Holstein Kiel only exacerbated their woes at the back. Here’s what to watch for ahead of Sunday’s clash.

The alarm bells are sounding at Bayern Munich‘s Sabener Strasse headquarters. Granted, you might find that a strange thing to say about the best club in the world, on the evidence of their stellar 2020 Treble-winning season, and the Bundesliga leaders (by two points) after 15 matchdays.

Yet the case for the Bayern defence gets ever wobblier with each passing week. Much had been made of the Rekordmeister conceding the first goal in eight straight Bundesliga affairs. Now, to be fair, these early jolts to the system served only to spark Hansi Flick’s team into action, as they ended up winning five times from those losing positions and drawing the other three.

However, last Friday’s 3-2 collapse at Borussia Monchengladbach painted a different and more concerning picture when it comes to Bayern’s glass jaw. That they established a comfortable 2-0 lead before throwing it away, into the Niederrhein night, and losing the game, revealed additional deficiencies.

The midweek DFB-Pokal marathon at second-tier Holstein Kiel, in which the visitors were taken to extra time and then eliminated on penalties, was additional cause for worry among Bayern fans. It was the first time since 2004 that a non-Bundesliga side had knocked them out of the German Cup competition.

To be blunt, Flick is fast getting to the stage of not being able to trust any of his back four options. Against Gladbach, the most grievous mistakes were committed by Niklas Sule, who had the kind of night he’ll quickly want to airbrush from history. Sule was left standing and watching even going back to the first two goals by the Fohlenelf, exposing suspect positional play, before giving the ball away cheaply to Jonas Hofmann, who set up Florian Neuhaus for Gladbach’s winner.

Ironically, Sule had come on as halftime substitute in the previous 5-2 comeback win over Mainz to solidify things; he even contributed that night on the scoring front. But that is Bayern’s problem in a nutshell. Every week, it seems, someone at the back has a nightmare, forcing others higher up the pitch to go above and beyond.

Kasey Keller questions if Bayern’s defence is suited to playing a high line after giving up 24 goals in 15 games.

At a certain point, it’s impossible to cover up for defensive negligence. The truth of the matter is that no Bayern player is beyond reproach, except perhaps Lucas Hernandez, who deserved to be reinstated in Kiel purely because he’s been used so sparingly since suffering injury in the 1-1 draw against Werder Bremen in late-November.

It would be a surprise if Hernandez, a battler as defenders go, is not deployed from the outset on Sunday against SC Freiburg. Of course, playing through a pandemic has its considerable challenges, but the truth is Sule, Jerome Boateng and David Alaba are not having the seasons expected from them as opponents have time and again exploited the favoured high line with quick, effective passes fizzed into the middle. Holstein Kiel did exactly that for the goal by Fin Bartels that levelled it at 1-1 on Wednesday.

Then we get to the troublesome full-back positions. Right-back in particular represents a dilemma for Bayern. Benjamin Pavard has quite simply never found his feet in a season riddled with basic errors and a tendency to be outrun by opponents. Furthermore, Flick has had absolutely zero attacking production from the Frenchman, which is unacceptable for a team like Bayern that expects it.

When they signed Bouna Sarr from Marseille, the idea was such an experienced player would serve as a useful back-up for Pavard, but that hasn’t worked out. Sarr has made three underwhelming league starts, while United States international Chris Richards is potentially an option despite being more of a central defender than a full-back.

Against Mainz, Bayern’s first opponent of 2021, the struggling Pavard was removed at half-time and Flick shrewdly moved Joshua Kimmich from central midfield to right-back with great effect. It contributed mightily to Bayern’s fightback from a two-goal deficit — a strong case can be made that in the short term, it would be better to have Kimmich be the right-back, where he can provide know-how, confidence and an attacking buzz.

The situation is barely better on the left side. Alphonso Davies deserved all the praise going for his superb, swashbuckling play in the first half of 2020, but like Pavard, he is woefully off-form. Remember: the young Canadian started the season losing his place to the versatile Hernandez and then was barely back in the side before suffering an ankle injury.

Thank goodness for Manuel Neuer behind all of them! Time and again, throughout this spell of defensive malpractice, Neuer has demonstrated why he was named best goalkeeper in the world at the tail-end of last year. That Neuer has gone 10 Bundesliga matches without a clean sheet, the longest such run in his career, is not his fault.

When you have a pronounced Achilles’ heel at the back, the last thing you want to do is the face the form team in the Bundesliga. But Freiburg will enter the Allianz Arena buoyed by a club record five successive Oberhaus wins. They are a study in contrast with the Bavarians, their stingy defence having conceded just two goals in that fabulous and surprising run.

The club began the season wretchedly, collecting just six points from eight games. Their 3-1 defeat against Mainz forced a rethink by wily and beloved coach Christian Streich, who switched formations (from 4-4-2 to 3-4-3), anchored by Keven Schlotterbeck. Since then, Freiburg have been flying and it won’t be lost on Flick and his backroom staff that they are the masters of effectiveness. Give them an inch and they will take a mile.

Vincenzo Grifo, operating on the left of the attack, is enjoying the best season of his career, so it will be interesting to see who is handed the onerous task of silencing him in that much discussed right-back slot for Bayern. Laufleistung (“running performance”) comes guaranteed with Freiburg. They pride themselves on covering ground with the best of them. Baptiste Santamaria, their record €10 million signing from Angers, embodies this spirit and has quickly become a favourite of Streich.

The other Freiburg player who really catches my eye is 22-year-old striker Ermedin Demirovic — not because he’s a prolific scorer, although he did provide the headed opener in last week’s 5-0 thrashing of FC Cologne. With Demirovic, it’s more his work ethic and game intelligence that jump out. That’s classic Freiburg.

After falling in Kiel, which means no repeat of last season’s Treble, what next for Bayern? Having already shipped 24 goals — the most after 15 matches since the 1981-82 season — are Bayern facing another nightmare on Sunday? Time will tell.