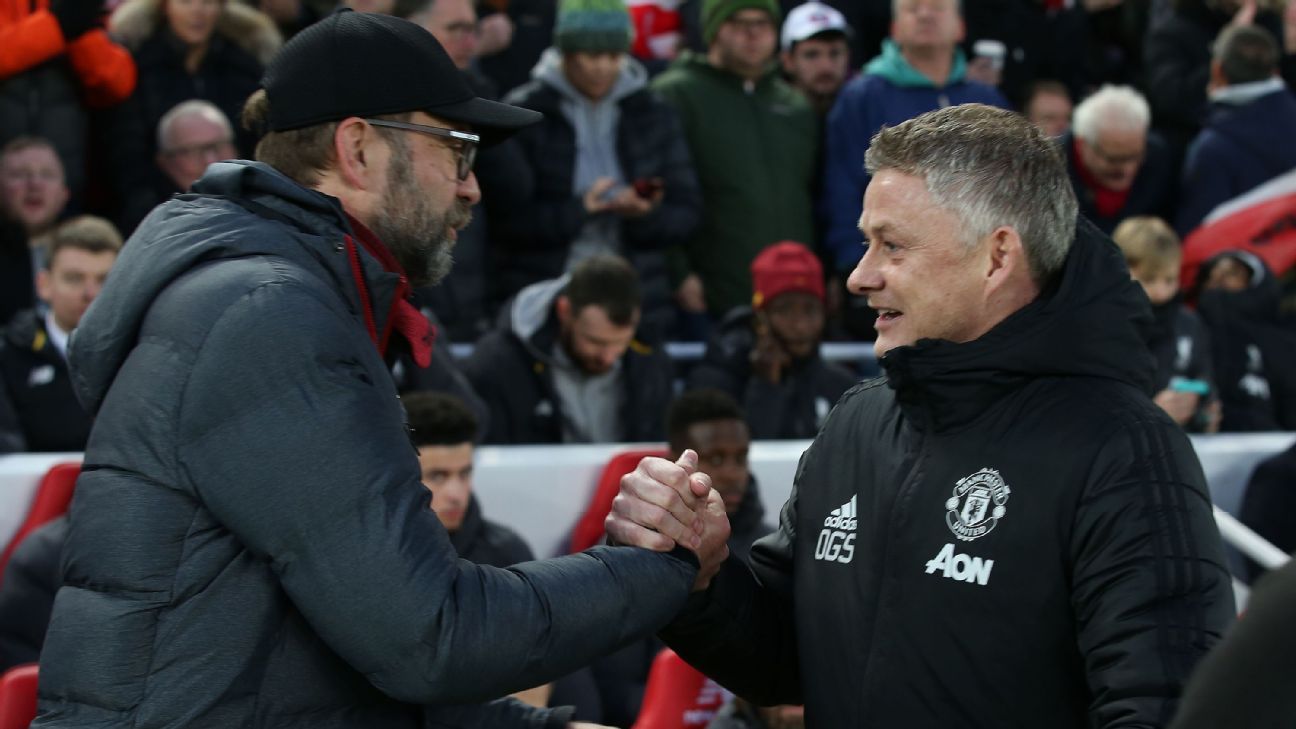 Jurgen Klopp has said he is not capable of playing “mind games” in the Premier League title race after being accused of attempting to copy Sir Alex Ferguson by ex-referee Mark Clattenburg following the Liverpool manager’s claim that Manchester United have had “more penalties in two years than I have had in five-and-a-half years.”

Klopp criticised the decisions of the match officials earlier this month after Liverpool’s 1-0 defeat at Southampton, when striker Sadio Mane had two penalty appeals turned down.

That loss, coupled with United’s 1-0 win at Burnley in midweek, ensures that Ole Gunnar Solskjaer’s team to travel to Anfield on Sunday ahead of Liverpool at the top of table, with hopes growing at Old Trafford of a first title success since Ferguson’s retirement as manager in 2013.

Ferguson led United to 13 Premier League titles and was notorious for playing so-called mind games, with well-timed comments against opposition managers and referees, during his reign as manager.

But after Clattenburg said this week that Klopp was attempting to use Ferguson’s methods to influence Sunday’s referee, Paul Tierney, the Anfield boss insisted such a move is not in his make-up.

“I am not sure if he was asked a lot of things, but long after his career, it is nice for him that we can talk about him as well.

“But I am not Sir Alex and this is not mind games. After the Southampton game, we had another game [Aston Villa in the FA Cup] before United and I didn’t think for a second about the United game in that moment.

“But before the game at Southampton, I saw the stat about the penalties (for United) and that’s what I mentioned.

“But people like Mark Clattenburg, speaking how they speak, it says much more about them than it could ever say about me.

“If he would be in my situation, he would obviously play mind games, but unfortunately I have no skills for playing mind games and that’s my problem.”

United forward Marcus Rashford has said this week that former Old Trafford manager Jose Mourinho told him that he had to be more “savvy” to win penalties after being fouled.

But when asked whether he has ever delivered the same message to his players, Klopp insisted he has never done so.

“I can 100% honestly say I have never, ever mentioned something like this, to any player,” he said. “I have worked with many players in my time, ask all of them, it never happened. That’s it.

“There are two situations in the last two games — Sadio Mane had a foul situation, which was a penalty for me but this is not important because I cannot whistle for it. It’s just my opinion.

“There was a situation when Sadio didn’t go down and, when people say he is a diver or whatever, it’s just not right.

“The game before, against Newcastle, we have pictures of the goalkeeper sat on the ground with both arms around Sadio’s legs. He didn’t go down — he tried to score a goal.

“I didn’t ask him, ‘Why didn’t you go down?’ We didn’t speak about it. If Sadio gets fouled, he goes down. If not, he does not.

“But the next day after Southampton, I tried to understand how people living on another planet would see it, that a handball was not handball and the Mane thing was not a penalty as well.

“OK, I’m wrong and they [ex referees] are always right. I don’t want penalties that are not penalties, but if it is a penalty, it would be nice if there is a penalty because it’s part of the game.”

Liverpool can replace United at the top of the table with a win on Sunday, but a defeat would send the champions six points adrift of the 20-time English title winners.

But Klopp, who confirmed that Joel Matip has a chance of returning the heart of defence after injury, said that there is no extra motivation required to beat traditional rivals United in any game.

“Winning against United is enough in itself, it’s not necessary there are special elements because of the situation they are in right now,” Klopp said. “They deserve the points they have, but there is still a long way to go in the season and Man City are not too far behind either.”