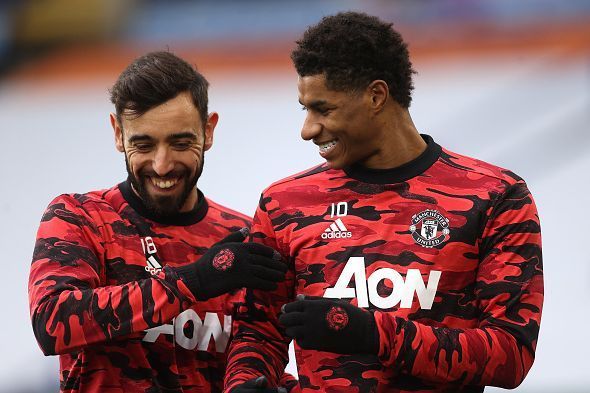 Marcus Rashford said Manchester United are ready “now more than we were two years ago” to fight for trophies, and there is nothing sweeter than scoring against Liverpool.

Rashford spoke in a wide-ranging interview at the Football Writers’ Association awards when he was commended for his campaign to lobby the UK government to fund free school meals for children, and given the Tribute Award.

In a tribute at the awards ceremony, Sir Alex Ferguson congratulated the 23-year-old, who was also awarded an MBE last year, for his work on the campaign outside of football.

“I have known him since being a kid of seven years of age, and seen him develop through the ranks of Manchester United into a truly wonderful person,” he said. “Apart from his football life, what he has achieved in the last few months is quite astonishing, how he has helped the people in need is a truly amazing achievement.

“I would like to congratulate him on that. He has shown to young people in particular there is a different way of dealing with life.

“He has shown great humility, he has shown courage to do what he did, so this achievement is well deserved and should be recognised with what he has done.”

On the pitch, Rashford believes with the Bruno Fernandes and Anthony Martial attacking duo, United have one of the most versatile squads “probably in the Premier League” and it is the start of more success for the club which has dipped since Sir Alex’ years in charge.

“Ultimately we are more dangerous, we can score goals at any time. But we can do much better. I believe it is still the start of something which can go on to be an unbelievable connection,” he said.

“Just the forward line in general at the moment which we have — we can play in so many different ways, in different positions with different personnel. We can just be so strong and for us, that is what is key because if we want to win trophies and win the leagues, then you need versatility.

“We are a team which is still improving, we are in a good run of form, so we have to just try to keep focusing on ourselves and do the best we can do. As long as we do that, you walk off the pitch with no regrets.”

– Marcotti: Man United leading the Premier League is a big deal
– Ogden: Liverpool-United is box office but City are team to watch

Having been knocked out of the Champions League and the semifinal of the Carabao Cup already this season, Rashford said having leaders in the squad has been key to push the team forward, despite social distancing making it difficult.

“As soon as we go out on the training pitch, that is when we can be together and have to do a lot of the work because the small things which would happen in the normal settings of a changing room, like conversations and the lessons you would have learned off some of the older players, that has been taken away from us.

“There are things which have happened where if you don’t come out and be a leader, someone that the squad can look to in difficult moments, then it will continue to happen. We have to show we are ready to fight for what we want — and what we all want is success.

“We are more ready now than we were two years ago in terms of leaders on the pitch and ready to fight for trophies. We are in the FA Cup and [have] the Premier League left, so we have to try to go and win both of them trophies, and just do our best to continue improving.”

Rashford also revealed when he was younger, despite having grown up in the United academy, he looked up to Arsenal‘s Theirry Henry in the No. 9 position.

“When I was younger, about 16 or 17, when I first started to play in that No. 9 position, [Henry] was someone that I looked at because he is not a traditional No. 9.

“He drifts to the left, he does things with the ball, he is not what you would consider the traditional No. 9 in English football,” he said.

“I knew I could never be … a traditional No. 9 who is going to hold the ball up, win headers and do stuff like that. But I also know the qualities that I do have and what I can do as a No. 9.

“He was someone that I paid close detail to and he is just a wonderful footballer and he knows his football as well … It is important for me to keep taking in that knowledge and I just try to treat my brain like a sponge really, and just soak as much information in as I can.”

As for the approaching Liverpool fixture, when asked if there was anything sweeter than scoring against the Merseyside club, Rashford said: “For me, no. Liverpool and [Man] City, there is no better games.”

“[Liverpool] are hard to beat at home. For us to beat them we are going to have to be at our best, it is as simple as that really.

“Nothing changes for us, we try to be at our best for every single game. We will approach that game in the same way. If you do that, as players if you give all you can give, you know that when you come off the pitch you have left everything out there, there is not much you can do.”