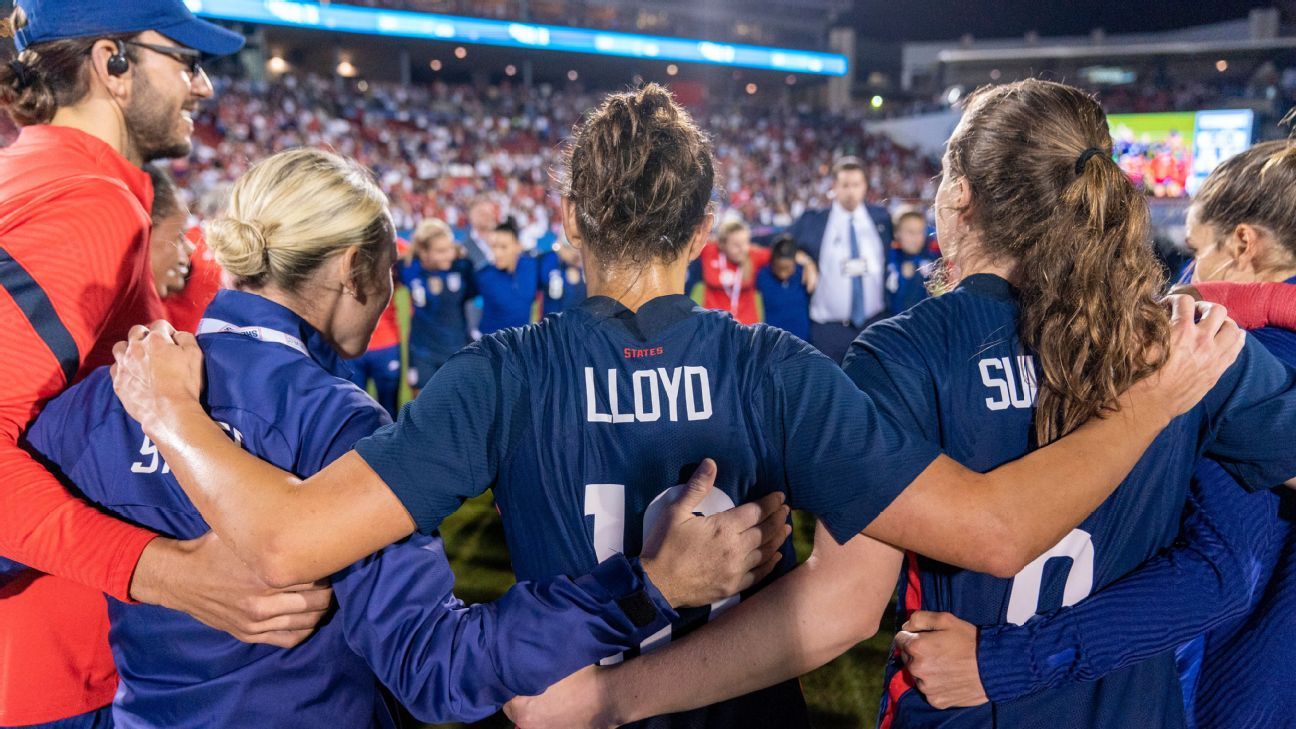 The problem is that we got to a point where we had character flowing out of our ears & eyeballs. There was no more space to hold character and frankly, we were also fresh out of patience, so we decided we didn’t actually need any more character — we just needed to educate the characters around us. Thankfully, eventually, we found a way.

I can’t even imagine how many times in 2020, the current national team must have yelled, building character! or, perhaps, something more colorful. With the pandemic came the shut-down of leagues and, then, the shut-down of sports, the closure of fields, parks, gyms… all the things you need in your profession to help maintain your game. So the players did what any motivated athlete does… they figured out a way to make it work, safely. They went overseas to play, they played in an NWSL bubble, they picked up games and training where they could.

Thankfully, eventually, they found a way.

If you need any further proof on if they passed the test of adjusting and adapting to 2020, look no further than their game in the Netherlands on Nov. 27 last year. It was a replay of the 2019 World Cup final of 2019 and, it’s worth noting, against a very good Dutch team that had many players in professional leagues who had continued to keep playing (more consistently than the US, that’s for sure) in Europe after much of the continent brought sports back.

I thought the U.S. team would understandably look rusty and tire quickly, having very few players who were fit enough to last 90 minutes. Instead, we saw the USWNT run the Dutch off the pitch. And now, as 2021 greets us with a huge Faustian laugh (wait, that is not how it was scripted), the big question — WHERE IS THE TEAM? in the continuum of growth given the challenges of 2020 — has been answered.

The bigger question, in my opinion, leading into the Olympics in July is: how do you sprinkle in some youth into this veteran group? Or maybe you don’t. But I would argue that it’s the most important decision that coach Vlatko Andonovski has to weigh in these coming months.

Carli Lloyd turns 39 at the start of the Olympics. Megan Rapinoe and Becky Sauerbrunn will turn 36 right before the Olympics. But it is not their ages that matter, of course; it’s always what accompanies the number in terms of the training environment and conditions they’re in.

Carli Lloyd has missed much of 2020 from a playing perspective due to injury. Megan Rapinoe has also barely played in 2020 due to COVID-19 concerns, and as she said recently, “I was not ready for competitive games because I did not have a consistent training environment with teammates.” She spoke of “needing a longer runway”. And equally important, her body just needed a rest.

There is a reason why no Women’s National Team has ever won the World Cup and then won the Olympics the very next year. It is super-tough turn. The players are exhausted. Maybe, dare I say, this Olympic delay allows for rest that actually makes the team better because two of their biggest superstars were allowed to physically & mentally recharge. Or, maybe not because the time off was too long. These next three months will tell us everything.

Can Lloyd and Rapinoe come back after such a long layoff with the same force and game-changing ability? With only 18 players on an Olympic roster (compared to 23 for a World Cup), it’s hard to make the argument that you would take them at less than full fitness. And if you don’t take them, which young players can fill the void? Are these younger players ready for the big stage? How does that affect the dynamic of this team? So many questions to be answered.

The great news is the fact there are some very talented young players who have the potential to break into that 18 player Olympic roster. Just to name a few…

– Catarina Macario, the Stanford superstar who moved from Brazil to the United States when she was 12 years old, was told on Jan. 13 that she is now eligible, as a U.S. citizen, to play for the United States of America.

This is a player who scored at will at Stanford (she led the nation in goals and assists in 2019), led them to a national title in 2017 and 2019, and was twice the Mac Hermann Trophy winner for best collegiate soccer player. She will not conclude her senior season at Stanford as she just signed with Olympique Lyonnais in France.

– Sophia Smith, also from Stanford University, was drafted as the top pick by the NWSL’s Portland Thorns in 2020 and dominated the youth national teams. A broken ankle her freshman year at Stanford in 2018 slowed her career a beat, but Sophia made it known she was back and healthy after being named the 2019 College Cup MVP.

– Emily Fox of UNC, who just got drafted as the #1 NWSL pick by expansion team, Racing Louisville
– Jaeline Howell, a junior from Florida State, who helped lead her FSU team to a national title in 2018
– Naomi Girma, a junior at Stanford, who was recently voted US Soccer Young Player of the Year

It’s a great problem to have if you are Coach Andonovski, but hard decisions await. Buckle up!