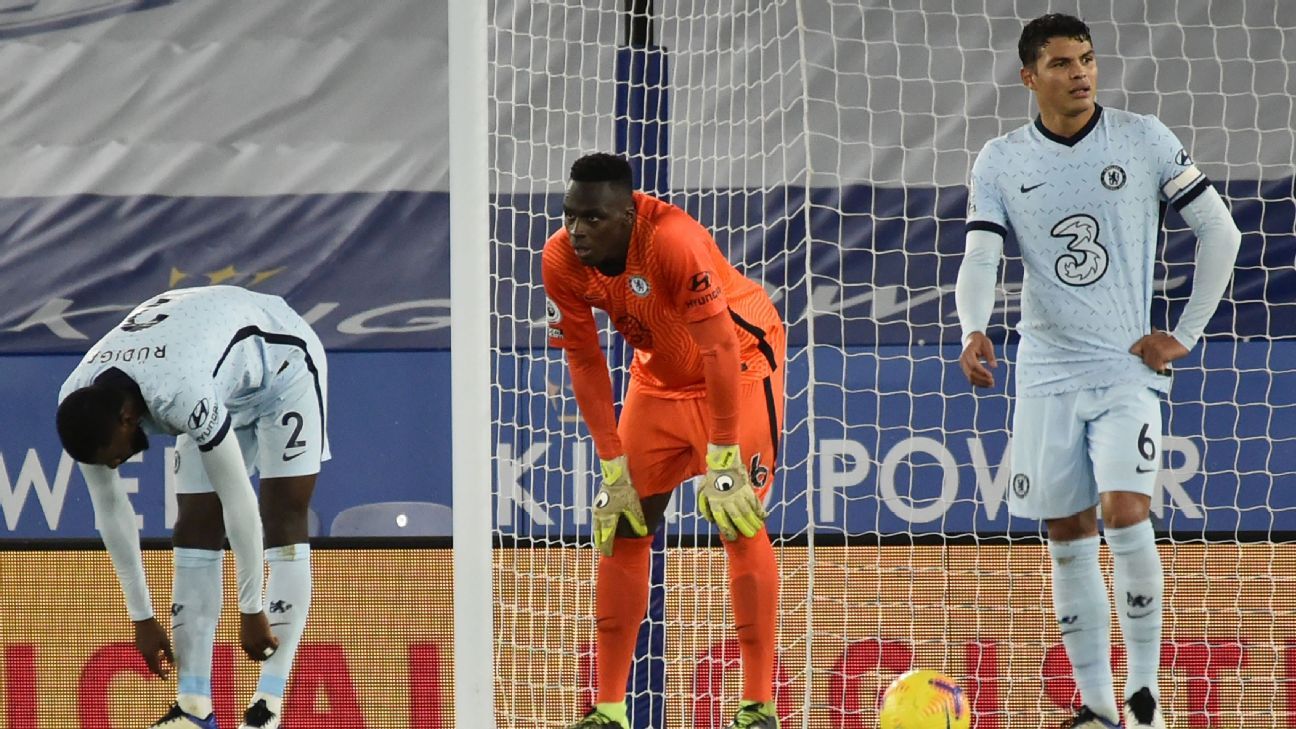 Chelsea manager Frank Lampard said he is “worried” about his side’s drastic dip in form following a 2-0 loss at Leicester City on Tuesday.

The pressure is on Lampard after his expensively assembled team fell to eighth place in the Premier League. Lampard conceded that Leicester, who went top of the table with the victory, were simply the better side and there was little in his team’s performance, their fifth loss in eight games, that indicates the West London side are progressing.

– Ogden: Leicester win rekindles dream of another title run
– Ratings: Pulisic gets 5/10 as poor defending helps Foxes go top
– How every Prem team has been affected by VAR

“We were beaten by the better team. They were sharper than us, ran more than us and they looked in form — we looked out of form,” was Lampard’s blunt assessment.

Too often against Leicester there was a lack of intensity about Chelsea’s play.

There was also a worrying lack of attentiveness in defence with full-back Reece James jogging back and failing to stick with James Maddison before the Leicester midfielder scored the second goal.

Maddison noted after the match that their first goal had come from a short corner routine they had practised in training, in the knowledge that Chelsea have a tendency to switch off at set-pieces.

Lampard’s hope that their weekend victory at Fulham marked a turning point was short-lived and he is understandably concerned about the team’s form which has seen them fall out of the title-chasing pack.

Frank Leboeuf wants Chelsea players to show a bit of accountability for their dismal display vs. Leicester City.

“I am worried about the slump — from the form we were in to get so quickly into the form we’re now… five losses in eight isn’t where we want to be.

“We were in a really good place in December, second in the league and two points from the top. Maybe complacency set in. There’s only one way out of it which is hard work.

“It is clearly concerning. It is a period we are not happy with, other clubs have been in that period. All we can think about is getting through the period, working hard. The important thing is the players bounce back. This is the cut-throat nature of what it is,” he said.

Chelsea’s hierarchy are not known for showing great patience with their managers and questions will intensify about whether the club’s popular former midfielder is the right man for the job.

“It intensified for me a while ago. Expectations at this club are high. Right or wrong. When we perform like that it is normal people will ask questions,” Lampard said.

“I can’t control it. I’ve been asked before, I understand it. It’s a developing team but I can’t get caught up in the reaction.

“I took this job knowing we would have difficult times. We just have to fight. Where everything was rosy in mid-December, it isn’t so rosy now. I am good at handling pressure,” he said.