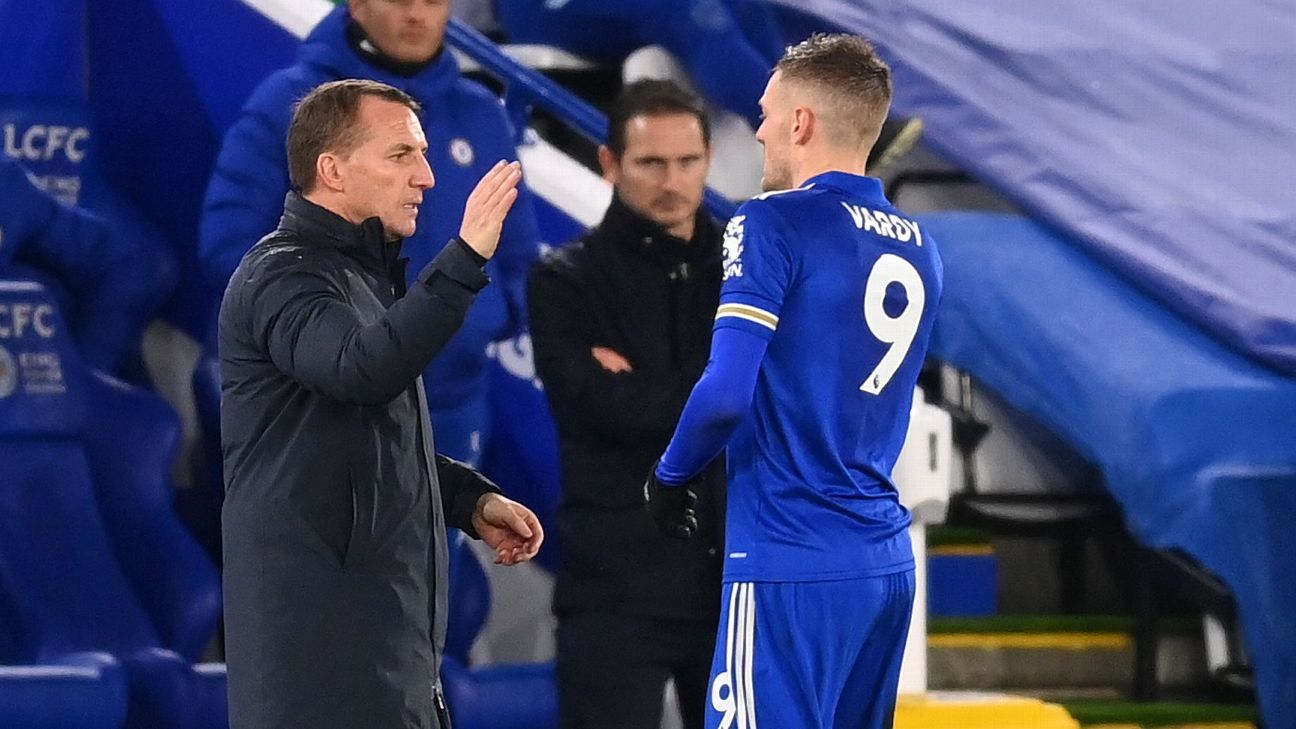 They say that lightning doesn’t strike twice in the same place and Frank Lampard will certainly be hoping that old maxim rings true after his Chelsea team were beaten by a Leicester side which moved to the top of the Premier League after a 2-0 victory at the King Power Stadium. Brendan Rodgers, meanwhile, will be thinking differently.

Back in December 2015, Leicester’s remarkable title success was sparked by a 2-1 win at home to a struggling Chelsea side. Claudio Ranieri’s team never looked back from that point and would go on to win the Premier League later that season. As for Chelsea, the defeat signalled the end for manager Jose Mourinho, who was sacked three days later.

– Ratings: Pulisic gets 5/10, defence woeful in Leicester loss
– Stream ESPN FC Daily on ESPN+ (U.S. only)
– Pulisic: I ‘grew the most’ at Chelsea with no fans

Five years on, Leicester have once again claimed top spot with nobody really believing they will end up as champions and Chelsea have another manager who is beginning to wonder whether his next defeat will prove to be his last.

“They [Leicester] were sharper than us and ran more than us,” Lampard said. “The bare minimum is to run and sprint and cover ground and too many of our players didn’t do it.

“We were beaten by the better team. Individual battles were lost. The players want to do well, they have the right intentions, but this should be a big jolt to them.

“It is clearly concerning. It is a period we are not happy with and other clubs have been in that period. The important thing is the players bounce back. This is the cut-throat nature of what it is.”

While clearly demanding more from his players, Lampard did not go as far as Mourinho back in 2015 — when the Portuguese accused his team of “betraying” his tactics — but the similarities are there nonetheless in terms of a manager being unable to get the best from his players.

Lampard can at least point to his team still being in touch — if only just — with the top four after Chelsea’s sixth defeat of the season.

Chelsea are eighth, five points adrift of the Champions League spots, whereas Mourinho’s side were 16th, one point above the relegation zone. The bad news for Lampard is that 2015-16 was the only time Chelsea have made a worse start to a season in the Roman Abramovich era.

Lampard is under increasing pressure, not just because of bad results but because the club’s big summer signings — Timo Werner, Kai Havertz and Ben Chilwell — are all failing to perform to expected standards. Werner, who started on the bench, has not scored a league goal since November and his only goal in 15 games came against League Two minnows Morecambe in the FA Cup. The German’s misery was compounded by a late goal being ruled out for the tightest of offside decisions.

But Lampard is struggling to prove he is the man to take the club forward as manager and his shortcomings were exposed by Rodgers who, allied with Leicester’s excellent player recruitment, has made the Foxes title challengers again with his coaching ability and man-management.

The fact that Rodgers was once a member of the Chelsea coaching staff under Mourinho and Luiz Felipe Scolari will not help Lampard either, with his bosses unlikely to enjoy seeing their expensively assembled team beaten so easily by a coach who left to further his career elsewhere.

Those same Chelsea directors may have wondered where their current team would be in the Premier League table if Rodgers was manager.

The former Liverpool and Celtic boss has confirmed his reputation as one of Britain’s best coaches since returning to the Premier League two years ago and both Rodgers and Leicester deserve to be taken seriously in this season’s title race. Ever since Rodgers left Celtic to take the Foxes job in February 2019, Leicester have been a force to be reckoned with.

Manchester City, Manchester United and Liverpool are more likely to finish as champions due to their greater depth, but make no mistake, this is a very good Leicester team and they should not be discounted.

They had already beaten City, Spurs and Arsenal this season before claiming all three points against Chelsea, so they know how to perform against the biggest clubs and there is enough talent and experience in the team to sustain a title challenge.

Despite losing Harry Maguire and Chilwell to United and Chelsea, respectively, since the start of last season, Leicester have unearthed gems to replace them and bolster the squad in other areas, with Lee Congerton, Rodgers’ sporting director at Celtic, following the Northern Irishman to the King Power and helping recruit the likes of Wesley Fofana, Youri Tielemans, James Justin and Timothy Castagne, who were all impressive in this victory.

Rodgers has blended the new recruits with the surviving members of Ranieri’s champions — Kasper Schmeichel, Marc Albrighton and Jamie Vardy — to make Leicester a team capable of beating anyone on their day.

But they didn’t even have to be at their best to beat Chelsea, who started terribly and did not recover.

Poor defending by Christian Pulisic at a corner enabled James Maddison to cross for Wilfred Ndidi to score a sixth minute opener and it could have been 2-0 nine minutes later when Maddison hit the crossbar from 20 yards.

Craig Burley explains why Frank Lampard may not be able to save his job after losing to Leicester City.

And it was clearly not going to be Chelsea’s night when a penalty decision was overturned by VAR on 39 minutes after Jonny Evans had tripped Pulisic. Replays showed the foul to have been outside the penalty area and Mason Mount sent the free kick high over the bar.

Two minutes later, more shambolic Chelsea defending led to Leicester’s second, when the ball bounced to Maddison after Antonio Rudiger had made a mess of a challenge on Vardy, leaving Maddison to score from close range.

Despite steadying the ship in the second half, Chelsea rarely looked like fighting their way back into the game and Leicester deservedly held on for the win that took them top of the table.

“We’re at the top of the league because we work hard,” Maddison said. “We’re not there by fluke. We’ll do our business in the background, let them talk about Liverpool, Man United and Spurs, we’ll just keep doing what we’re doing.

“You can get side-tracked. The most important game is the next game, as cliche as it is, that’s how we have to work because we have that mentality.”

United and City can both go back above Leicester with wins against Fulham and Aston Villa, respectively, on Wednesday, but this performance underlined the strength of Rodgers’ team.

The flip side also highlighted the problems that Lampard is battling to overcome, but unlike Mourinho in 2015, he may get time to find an answer. However, he won’t get long.