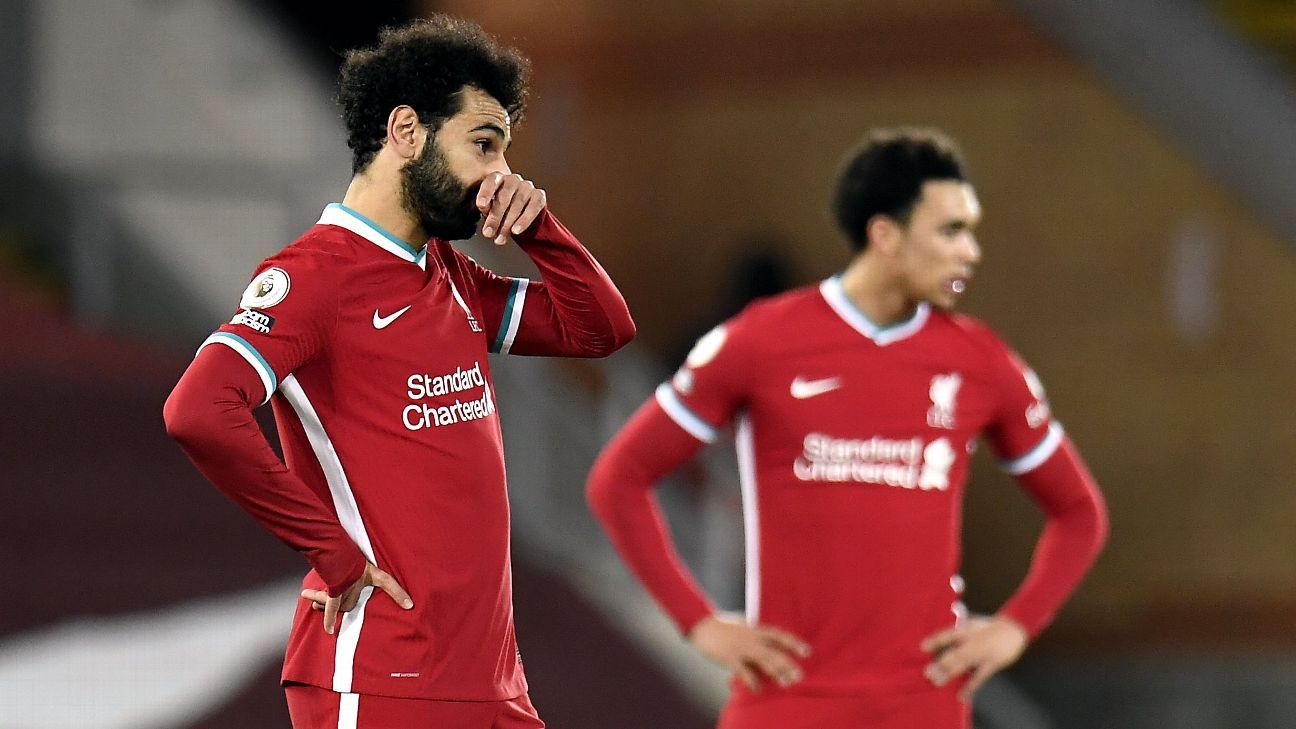 Burnley pulled off a shock 1-0 upset of Liverpool ion Thursday, ending the Anfield side’s 68-match home Premier League unbeaten streak and extending their scoreless run in the top flight in 2021.

The win was Burnley’s first at Liverpool since 1974 and sees Jurgen Klopp’s team slip further behind the leaders in the Premier League, while their scoreless run in the league was stretched to 438 minutes.

After the match, Klopp said his team wasn’t even thinking about defending the Premier League title at this point.

“It’s a tough one, not easy to explain,” Klopp said. “These boys are not the kind of [people] after a 7-0 to think we’ll go like this, they worked tonight hard and it didn’t happen, if something doesn’t work you have to try harder, more often, longer.

“It was not easy to lose that game and we did it. It’s not about blaming, we have to sort it together and we will. In football you don’t have a lot of time. We tried a lot, in some moments the right things and some not. That’s the problem. You have to break the wall down by trying, in the right mood. We had chances.

“We can’t imagine the title race at the moment.”

Klopp tweaked his forward line for the match, starting Divock Origi and Alex Oxlade-Chamberlain alongside Sadio Mane, while picking Xherdan Shaqiri in his XI in midfield.

Burnley, who entered the match four points above the relegation zone, stood tall against Premier League holders Liverpool in the first half, with Nick Pope making a nice save from a well-hit Origi shot shortly after the half-hour.

Liverpool had only scored one goal in their previous four Premier League matches and despite ratcheting up the pressure on the visitors as the first half wore on were unable to find an opener, as Origi hit the post with only Pope to beat just before the break.

Still seeking a breakthrough goal, Klopp brought Roberto Firmino and Mohamed Salah off the bench in the 57th minute as Liverpool looked to keep pace at the top of the table following Wednesday wins from Manchester United and Manchester City.

Burnley took a shock lead late in the second half when Ashley Barnes converted from the penalty spot after Liverpool keeper Alisson had tripped him up in the area.

For all their pressure and 73% possession, Liverpool struggled to create real openings with Ben Mee and James Tarkowski outstanding in the centre of Burnley’s defence.

Liverpool, who last lost at home on April 23, 2017, stay in fourth in the table on 34 points, while Burnley picked up a crucial three points to put distance between them and the relegation zone.