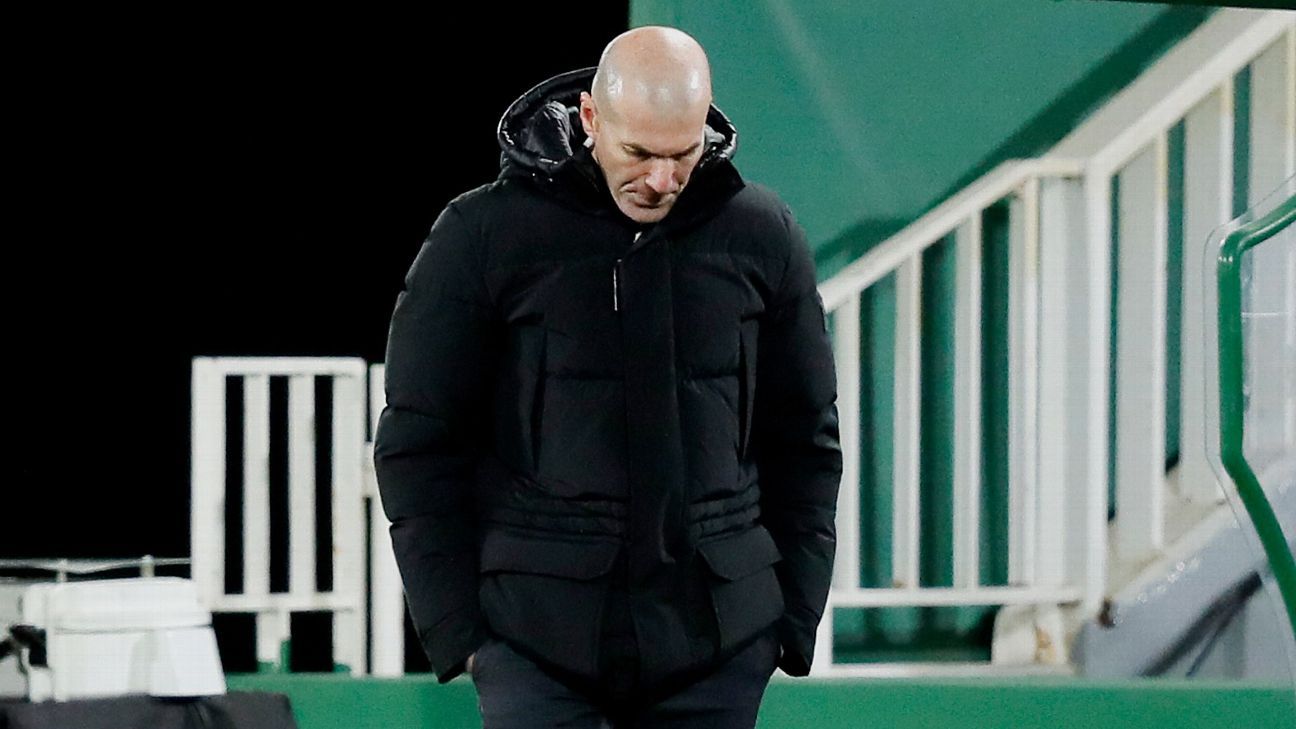 Real Madrid want to keep Zinedine Zidane until the end of the season despite the disappointment following the team’s early exit from the Copa del Rey, club sources have told ESPN.

Madrid lost 2-1 to Spanish third division club Alcoyano in extra-time to crash out of the Copa in the last 32, a setback hot on the heels of last week’s 2-1 defeat to Athletic Bilbao in the Spanish Supercup semifinal.

The French coach has not had the same backing as in previous occasions with Wednesday’s defeat having caused much damage to Zidane’s image.

However, Real Madrid’s board, led by president Florentino Perez, is not considering sacking the coach unless a catastrophe occurs.

Sources tell ESPN that within the club there is great anger over the Frenchman’s decisions. Few understand why Zidane insists on keeping players like Marcelo and Isco, while at the same they they understand the blame should be shared.

The club’s aim is to wait until the summer to meet with Zidane and take a decision, which will depend on what happens for the remainder of the season.

The same sources have told ESPN that there are still two titles — La Liga and the Champions League — to play for that can turn around the campaign.

Even before the latest defeats, Zidane had already faced adversity as the team struggled though ultimately progressed to the knockout round of the Champions League, and he has been scrutinised over his management of several talents in the team.

Madrid invested heavily in recent years with young talents like Martin Odegaard” target=”_blank”>Martin Odegaard, Vinicius Junior, Luka Jovic, Brahim and Rodrygo with the intention that one day they would lead the team alongside youth products like Sergio Reguilon, Achraf Hakimi or Marcos Llorente.

However, Zidane has preferred to play veterans that helped him win three Champions League titles during his first spell at the club.

Gab Marcotti says Real Madrid’s surprise defeat vs. Alcoyano is a reminder that all is not well in Madrid.

As ESPN recently reported, the cases of Hakimi, Reguilon, Llorente and Jovic have not helped Zidane’s image as they have all left seeking playing time.

Jovic even scored twice immediately upon his return to Eintract Frankfurt. The defeat to Alcoyano came hours after Odegaard, another long-term investment made by the club, requested to leave in search of more minutes.

ESPN is aware that there is a difference in opinions within the changing room regarding Zidane’s decisions. Some have defended Zidane for calling on the more experienced players, who do not require any adaptation time. However, there is another view, mostly shared by Madrid’s young players, who are starting to view with suspicion the lack of confidence that Zidane has in them.

In Perez’s first stint as president, the club heavily invested in the Galacticos. That approach has changed with the club’s sporting project now based on training future talent and combining those with the signing of stars like Eden Hazard or Thibaut Courtois.

Club sources insist that the academy must play a “crucial role” at a time when it’s difficult to make signings due to the financial impact that the coronavirus pandemic has had.

Zidane’s entourage, meanwhile, has told ESPN that the French coach is “worried” about the situation but has no intention to resign.

In fact, they claim that the coach continues to trust his team despite what is being said and he believes patience is needed for the project to grow.

Hence, Zidane’s job is not on the line for the time being. Moreover, all parties are eager to turn the page after the Spanish Super Cup and Copa del Rey disappointments with patience and work to return to the winning trail on Saturday at Alaves.