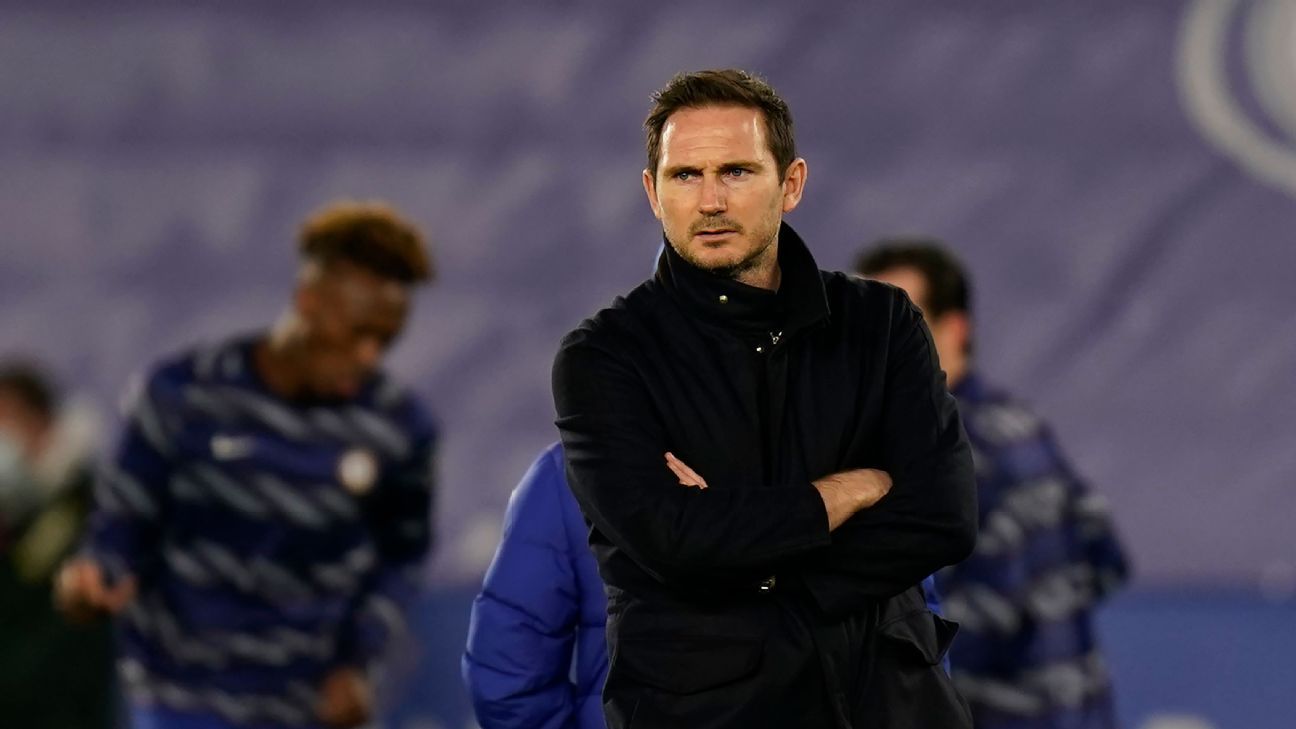 There’s a familiar ritual whenever Chelsea struggle in midseason — and make no mistake about it, seven points out of a possible 24 in their past eight Premier League outings is a massive tailspin — and it centres around an impatient Roman Abramovich, surrounded by a virtual (possibly Zoom or, more likely, Telegram-based) court of agents, advisers and friends-of-friends, worthy of “Game of Thrones,” pushing potential replacements and the urgency of change.

It feels like a plausible trope because Chelsea (not counting Steve Holland or Ray Wilkins and their one-and-done stints) have made 13 managerial changes since Roman Abramovich acquired the club in 2003. That’s more than Manchester United, Liverpool and Arsenal combined. Throw in the fact that Chelsea find themselves in this position (eighth in the table) after finishing fourth last season and engaging on a summer transfer spree that resulted, according to Transfermarkt, in a net spend of £170.9m. Again, that’s more than Liverpool, Manchester United and Arsenal combined.

And so, the questions are inevitable. How safe is Frank Lampard’s job? Who are Chelsea lining up to replace him? How soon before Lampard leaves?

Indications coming out of the club are that all this is premature. Nobody is guaranteed a job in perpetuity, but there are plenty of things Lampard has done well in his 18 months in charge, and the intent is to give him every chance to succeed. This basically means he’ll stick around unless things deteriorate further, or Chelsea suddenly come to believe that a top-four finish is in serious peril and somebody else is capable of coming in right now to give them a better shot at next season’s Champions League.

Are these empty words? Maybe, but a closer look at both Chelsea’s past and present suggests they might be telling the truth. And there are plenty of clues to why that might be the case.

First and foremost is that the manager-changing Abramovich persona is a bit of an exaggeration, particularly in recent seasons. Yes, Lampard is their seventh manager since they won the Champions League in 2012, but two of the six (Rafa Benitez and Guus Hiddink) were interim bosses on short-term contracts. Roberto Di Matteo was, himself, an interim boss who became a permanent boss by virtue of winning the European Cup, but he was never seen as a long-term solution.

While it’s true that he might have been fired anyway, Maurizio Sarri actually left to take charge of Juventus. Jose Mourinho’s return ended with the club one point above the relegation zone: not exactly a knee-jerk sacking. Finally, Antonio Conte stuck around until the end of his second season even as his relationship with the club rapidly, and severely, deteriorated.

A more significant factor is that Chelsea made a huge call this past summer, one that cut against conventional wisdom and the actions of virtually every other big club: they doubled down and spent big on new players during a pandemic, at a time when they knew revenue was going to be severely affected (indeed, it has been) and without knowing for how long. Matchday income went down to zero, media revenue declined as broadcasters asked for (and obtained) rebates, while commercial partners began scaling back.

Chelsea’s decision to sign players during the pandemic and bring in Timo Werner, Edouard Mendy, Malang Sarr, Ben Chilwell and Kai Havertz (plus Hakim Ziyech, whose deal had been agreed before we knew what COVID-19 was, and Thiago Silva, who arrived on a free transfer, but with a hefty salary) might have been counterintuitive, but from a certain perspective, it made sense. They were accumulating assets at a time when the competition was, broadly, scaling back — assets that would appreciate in value if they played well and, because they are young, retain value if they struggled.

The problem is that the pandemic worked both ways.

It might have been somewhat cheaper to buy, but it also became very difficult to sell or even loan players on the sort of salaries Chelsea players have. No fewer than 11 since-departed players — and their wages — were still at Stamford Bridge, waiting to find out what their future might hold when the season began. Some, like Ross Barkley and Ruben Loftus-Cheek, featured at the start of the campaign. Lampard, already with a very limited preseason and few friendlies to work with, had to deal with a bloated squad, which only made it more difficult to work. Throw in injuries to some key players (Ziyech, Christian Pulisic) as well as the late arrival of Havertz, and there simply wasn’t time to make the sort of decisions and experiments that would ordinarily be made in preseason.

The club are very clear on this, just as they’re clear on the fact that adding six starters (or, at least, guys with “starter” price tags) into an XI is going to be far from straightforward, which is why there’s plenty of merit to the argument that Lampard needs time to be fully assessed. Equally though, there’s no question that mistakes were made, from the changing cast of characters in midfield and out wide, to playing Timo Werner as a lone striker, and even to the bumpy relationship with Antonio Rudiger earlier this year.

The fact that Lampard has corrected course and opted for a different approach is seen by some at the club as encouraging and a sign of intelligence. But sooner rather than later, you have to get it right and deliver results.

Frank Leboeuf wants Chelsea players to show a bit of accountability for their dismal display vs. Leicester City.

Another factor in Lampard’s favour is that while this is a big and deep squad, it has a glaring weakness. It’s not lost on anyone that Chelsea have just one specialist defensive midfielder, N’Golo Kante, and he rarely plays like a pure holding midfielder of the sort who sits in front of the back four. Chelsea were linked with Declan Rice for most of the summer and to many observers, it made sense. Twenty-two years old, three years of Premier League experience under his belt, eight seasons in Chelsea’s youth academy before being released and Mason Mount‘s pal … what’s not to like?

Except that deal never happened, and while Rice might not be the second coming of Claude Makelele that some Chelsea fans think, there is no question he would have made this a more balanced side in the middle of the park, offering more protection to the back line and a platform for the front players. We don’t know why it didn’t happen; we do know it was talked about all summer, and we can speculate that the £80 million price tag West Ham placed on his services had something to do with it.

In normal circumstances, players like Barkley, Loftus-Cheek and perhaps Jorginho might have been sold to raise the needed funds, but the pandemic football economy isn’t normal circumstances. And that raises the question: what if Chelsea had spent the Havertz money (£72 million plus bonuses) on Rice instead? Was it ever an “either/or” situation? And if it was, what would Lampard have wanted?

There’s no question that Havertz is, potentially, a generational talent, but equally, there’s no question he’s a very young player with a huge price tag needing to adapt to a new league without the benefit of preseason. Not only that, but there’s still no consensus as to what his natural position is, which is why Lampard has used him in at least four different roles. In each of those roles, Chelsea already had far more depth than in the role Rice would have filled.

There’s also no question Havertz hasn’t lived up to his price tag or his salary: he hasn’t played a full 90 minutes of league football since mid-October. He might yet blossom, of course, but his signing in many ways is emblematic of the perpetual tension between club — who thinks long-term — and manager, who, necessarily, thinks about his job and achieving results this season.

Finger-pointing over signings and who wanted whom is futile and destructive, and Chelsea are keen to avoid this. It was a joint decision made by Lampard, Director of Football Petr Cech, head of international scouting Scott McLachlan and others. Fine. But those in the room know who was driving the discussion and they know why and how they didn’t sign Rice or a player similar to Rice. Presumably, so too does Abramovich.

Last season’s achievements, coupled with the three factors above, are what will keep the manager in his job, provided that results start to improve. Lampard is far from blameless, and he’d be the first to admit it. If anything, it would be odd if a guy with two seasons of managerial experience wasn’t making mistakes. But in addition to the usual mitigating circumstances, there are others that apply here including some, like Rice, that might be just below the surface.