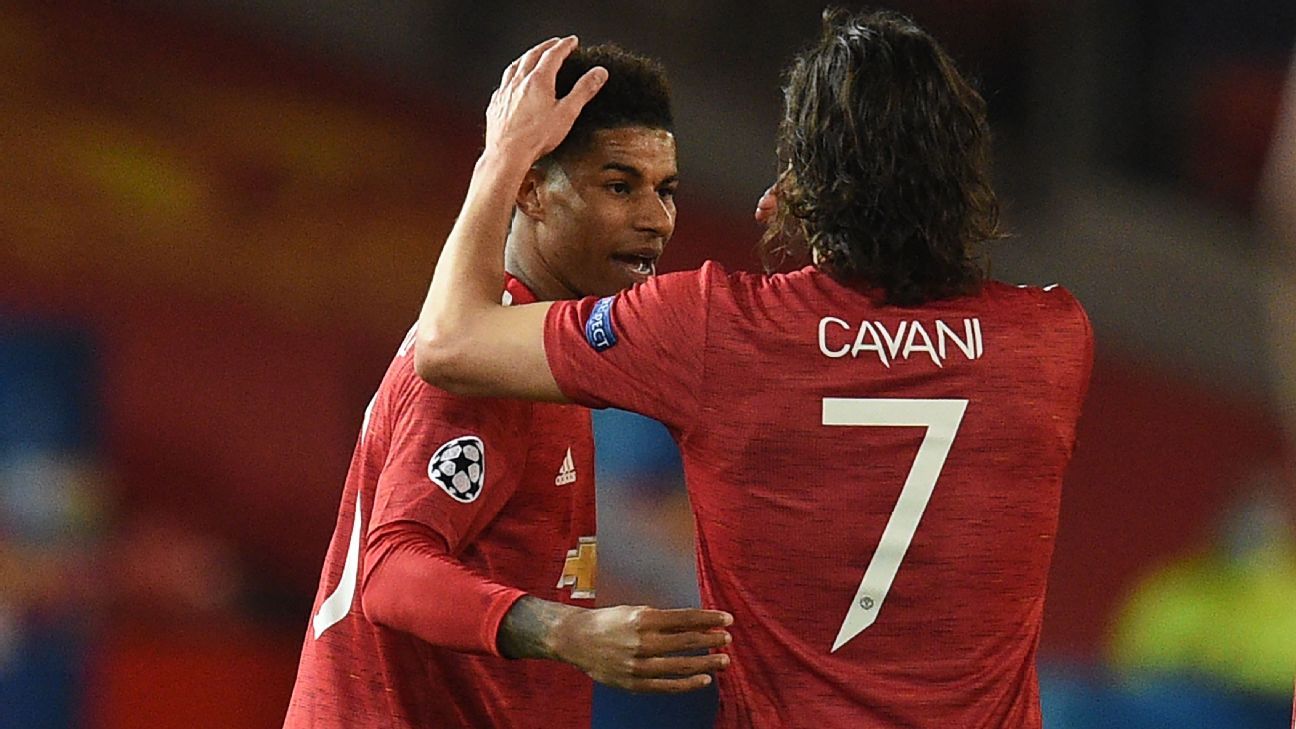 Marcus Rashford should look back on his 85 minutes on the substitutes’ bench during Manchester United‘s 2-1 win at Fulham as one of the most productive experiences of his career. If he used his time wisely, Rashford will have seen Edinson Cavani deliver a masterclass in the art of playing as a centre-forward.

Some might argue that the strength of United’s opponents diminishes the value of breaking down Cavani’s performance, with Fulham starting the game four points adrift of safety in the Premier League relegation zone. But the ability of Scott Parker’s team and defenders should not detract from the display of the 33-year-old Uruguay international, whose 21st-minute equaliser, following Ademola Lookman‘s fifth-minute opener for the hosts, gave United the platform on which they built the victory that took them back to the top of the table.

In October, United completed the deadline day signing of Cavani on a free transfer because manager Ole Gunnar Solskjaer was desperate to find a solution, temporary or permanent, to his squad’s lack of a true centre-forward. Signing the former PSG striker appeared to be a gamble — not quite in the same league as last January’s late scramble to sign Odion Ighalo on loan from Shanghai Shenhua, but a gamble nonetheless considering he’d been a free agent since being released by Paris Saint-Germain last June and hadn’t played or trained properly for months.

But against Fulham at Craven Cottage, just as against Everton at Goodison Park in the Carabao Cup quarterfinal in December, Cavani dispelled any doubts over his enduring quality by producing an outstanding display of centre-forward craft to help United to an important victory.

Three days earlier, Rashford was deployed at centre-forward by Solskjaer for the 0-0 draw against Liverpool at Anfield, and the 23-year-old struggled to make an impact. It’s been a similar story whenever the England forward has played through the middle; equally, Anthony Martial has also found it difficult to convince Solskjaer that he is the answer as United’s best centre-forward.

At 33, Cavani is clearly not the long-term solution either, but he’s buying United time to either identify the best player to sign, or for Rashford or Martial to develop into masters of the role.

Solskjaer has already tried and failed to sign the outstanding young centre-forward in the game right now: United’s move for Erling Haaland proved unsuccessful last season when the Norwegian chose Borussia Dortmund instead when leaving FC Salzburg. If or when Haaland becomes available again, United will be at the front of the queue to sign the 20-year-old. But they may already have missed their best chance to take him to Old Trafford, with competition for his signature likely to be much more intense than last time when he does decide to move on.

Therefore, United and Solskjaer might have to rely on Rashford developing into the answer, by working him alongside Cavani and having him learn from a player who has been one of the world’s top centre-forwards for over a decade.

Does Rashford have it in his locker to become a centre-forward? He’s unquestionably an attacking player of supreme talent, but Rashford’s strengths at the moment are his pace, ability to cut inside from the left and readiness to shoot from distance. It requires many more attributes to be top class in the position.

United have had some great ones in recent years — Ruud van Nistelrooy, Wayne Rooney, Robin van Persie, Zlatan Ibrahimovic — and they could all do things that Rashford still cannot do. They were able to play with their back to goal and were physically strong enough to withstand tight marking by defenders, outmuscle them to create space and take advantage of chances. They were all powerful in the air, able to score regularly with their head, and they all had the crucial discipline of being able to play through the centre of the pitch — within the narrow corridor the width of the “D” on the edge of the penalty area — to give their team a focal point that could receive the ball and hold up play for teammates to join attacks.

Most importantly, they each had a goal scorer’s instinct that enabled them to sniff out and take chances others simply fail to see.

Bayern Munich‘s Robert Lewandowski is arguably the best example in the modern game of a true centre-forward, but Cavani is not far behind the Poland international. And at Fulham, he displayed all the qualities required of a great centre-forward, with endless workrate also part of his game.

Cavani chased down Fulham’s defenders for the full 90 minutes and forced them into mistakes. His goal was another example of what a top striker can do: He pounced on a loose ball created by goalkeeper Alphonse Areola‘s failure to properly clear a cross and scored from the rebound before any defender was able to react. In the second half, he continued in the same vein and gave another example of his quality by almost scoring with a header after his movement and anticipation took him past Fulham’s defenders and into the penalty area.

Rashford was on the bench when all this was happening and if he was soaking it up, he will have realised that Cavani can do so many things that he still can’t. Cavani’s movement and ability to bend his runs, timing them so he’s not caught offside, is a big lesson that Rashford must learn, but that can come with work on the training ground.

Whether Rashford can develop the other qualities remains to be seen. Will he be able to become physically strong enough to play as a centre-forward? Can he go against his natural instinct to run at goal and learn how to play with his back to it instead? Can he become stronger in the air? And can he become more ruthless when he has a chance to score? Or should United simply encourage him to become even better as their left-sided attacker — he may have to fight Martial for that spot — and not risk sacrificing his qualities in order to make him the answer through the middle?

There are big questions to be addressed, both by Rashford and United, but unless they’re able to make it second time lucky with Haaland, they both need Cavani to defy his age and continue to show how it’s done.