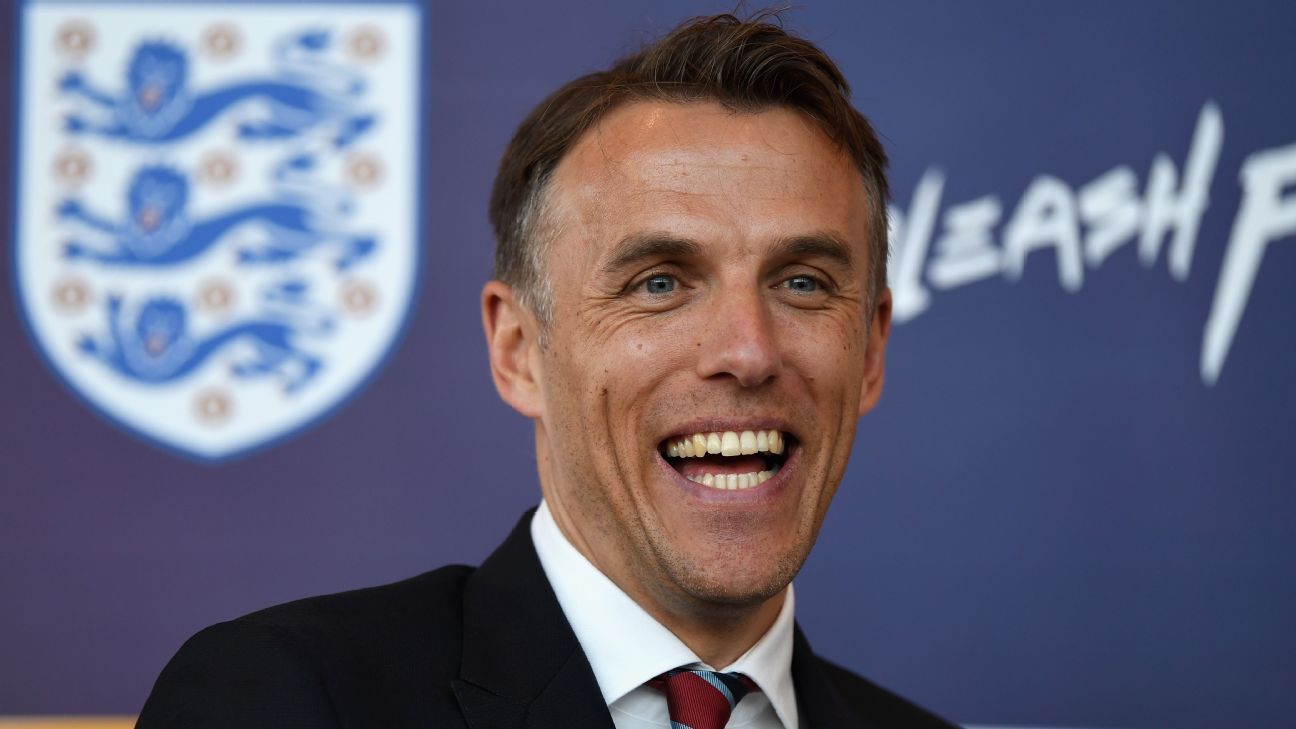 The response to Inter Miami CF naming Phil Neville as manager on Jan. 18 has been tepid at best since he was first linked with the job on Jan. 6, but the chorus of reactions has been consistent: Neville is only there because he’s the longtime friend and former teammate of Miami co-owner David Beckham, Neville’s coaching resume is thin, and so on and so on.

For a club that’s promised the world but not yet delivered, hiring a manager light on experience will do little to raise expectations outside the club after a humiliating debut campaign, and Friday’s news conference introducing Neville and sporting director Chris Henderson — and led off by Beckham and managing owner Jorge Mas — did little to dampen questions of the new coach. The feeling remains that Neville’s limited experience — his only prior job in management has been with the England women’s national team — means he’s only there because he’s the longtime friend and former teammate of Beckhams, even as Mas and Beckham did their utmost to defend the decision.

“Of course, people are always going to turn around and say, ‘Oh, it’s because he’s your friend.’ It’s nothing to do with him being my friend,” Beckham said. “Our ownership group don’t just employ our friends. We employ the best people, whether it’s on the field, off the field, in our backroom staff, the staff that we have work in our training facility, at the stadium.

“We are running a serious soccer club here. And I think at the end of the day, we hire people that we feel are best suited for the job.”

In all industries, people often hire those they know and with whom they are comfortable. And for those who crossed paths with Neville over the years, there is nary a disparaging word to be said.

“As a human being, I really like Phil a lot,” Landon Donovan, who was teammates with Neville during two loan stints with Everton in 2010 and 2012, told ESPN. “He’s always had a coaching mind/attitude about him. He very much showed that role on the field and off the field as a captain.”

The fact is that Miami is in this position because of a hugely disappointing debut season in MLS, even as Mas said, “We achieved a lot.” Yes, Inter Miami reached the playoffs, but that was only due to MLS expanding the field due to the COVID-19 pandemic. Meanwhile, fellow debutantes Nashville SC not only finished higher in the standings, but eliminated Miami from the postseason. The performances cost both COO and sporting director Paul McDonough and manager Diego Alonso their jobs.

Which brings us back to the hiring of Neville. Granted, in the world of MLS, neither a lack of experience nor using connections to get a job are all that unusual when it comes to hiring a manager. Reigning MLS Coach of the Year Jim Curtin had absolutely no professional managerial experience to speak of when he took over the Philadelphia Union in 2014. And thanks to the patience of upper management that allowed him to grow into the job, as well as the adherence to a coherent plan, Curtin led the Union steadily up the ranks in MLS, all the way to the Supporters’ Shield in 2020.

Just last week, Toronto FC hired Chris Armas as its manager. Armas has some history in MLS as both a player (12 seasons) and manager (parts of three seasons), but his connections with GM Ali Curtis during Armas’ managerial stint with the New York Red Bulls, a period that included a Supporters’ Shield triumph after taking over from Jesse Marsch, didn’t hurt.

“It doesn’t surprise me at all that this is what [Neville has] gotten into after his career,” Donovan said. “Now he’s had some different experiences that probably helped him. I haven’t been in a locker room with him as a coach, so I can’t speak to that, but he’s a really bright soccer mind and I think understands the game very well.”

Player and coach remain two distinctly different jobs, and the game is littered with former players who didn’t have success as managers. Former Manchester United teammates Roy Keane and Neville’s brother Gary are just two examples. But one player with experience playing under Neville is Houston Dash and England international Rachel Daly, and she was full of praise for Neville regarding his stint as manager of the England women’s national team.

“I don’t think I could have a bad word to say about Phil. I think he changed the dynamic of women’s football in England,” Daly told ESPN. “Communication, I think, is one of his biggest qualities. He was very clear, straightforward and pretty blunt with me and everyone else on the team. What you see is what you get with Phil. I played multiple positions, and he was very honest and open about what he saw of me.

“I think his tactical knowledge of the game is brilliant, breaking it down very well and exploiting the areas and weaknesses of the opposition and using that to our advantage. I think he’s a very good coach.”

Neville’s run of results following the 2019 World Cup wasn’t stellar by any means, with just three wins in nine matches, and a drop to sixth in the FIFA rankings from a high of third prior to that tournament. Daly didn’t feel that was on the manager, speaking of a “World Cup hangover” following England’s run to the semifinals, as well as preparation for the Olympics.

“I think Phil had a job to look towards the next tournament, and he was tinkering with the squad and playing different people in different positions,” she said. “That’s kind of the gamble, and the risk you’ve got to take in games in preparation for an Olympics, a Euros or even the next World Cup.”

So why then the negative reaction to the hire? Simple: It feels like Inter Miami is settling, and not for the first time.

From its inception in 2018, Miami has spoken of wanting to do things bigger and better than any other team in MLS. There would be big stars and a shiny new stadium.

“I want Miami to be MLS’ global team,” Mas told ESPN in 2019. “We’re located in a city which is the gateway to the Americas, a multicultural melting pot where frankly soccer is the most popular sport among our population and our fans.”

Instead, Miami is playing its home matches up the road in Ft. Lauderdale, its proposed venue at Miami Freedom Park is in stasis due to the pandemic and the labyrinth that is Miami politics. And while the club made high-profile signings in Blaise Matuidi and Gonzalo Higuain, it’s still unclear just how much the duo will move the needle in the notoriously fickle South Florida sports landscape.

This goes for managers as well. Carlo Ancelotti, Patrick Vieira, and Marcelo Gallardo were among the names linked — albeit, very speculatively in some cases — to the job. In the run-up to hiring the team’s first coach, Mas didn’t hold back in highlighting the pedigree of those who had been interviewed.

“The coaches that we’re going to pick have all coached at the highest levels. They’ve all coached Champions League teams,” said Mas in 2019. “They’ve been very good players, also in their own right. We’re going to play an attacking style of football, which has been led and bred by David Beckham’s vision of how he wants our team to play.”

Even when the team appointed Alonso — a man with a resume far more extensive than Neville’s, having had successful stints with Pachuca and Monterrey — ahead of the 2020 season, it had the feel of a hire that underdelivered on the hype surrounding the club. When Miami’s ownership cut Alonso loose after a campaign in which the team finished 10th out of 14 teams in the Eastern Conference, it looked like an opportunity to get the coach they really wanted.

That Neville is the choice that emerged is just the latest in a series of buzzkills.

Granted, Neville has no control or blame for any of Inter Miami’s failures to set or meet expectations in their first season. It’s his team now, and it will be up to him to maximize the talent he has available, a group that in addition to Matuidi and Higuain includes Mexico international Rodolfo Pizarro and last year’s surprise standout Lewis Morgan.

New Inter Miami coach Phil Neville explains how he will identify new players to build his squad in MLS.

Neville will also need to mesh quickly with the highly regarded Henderson, and make sure that the two, along with Beckham, are on the same page in terms of how the team gets built. That trust between ownership, front office and manager faded over the course of last season. Making sure that dynamic is solid will play a significant part in whether Neville succeeds or fails.

“When it gets down to work, we’re here to win,” said Neville. “We’re here to be successful. We’re here to build something really great. And I think there will be times when [Beckham and I] have difficult conversations. But I think because of the loyalty, the trust, and the friendship that’s been unbroken for 90% of our lives, that will always remain the same.”

Will Neville have more time than Alonso had? One would hope, but it also seems like his relationship with Beckham will only get him so far.

“That gets set to the side pretty quickly, once you have to start getting results,” said Donovan of Neville’s relationship with Beckham. “I don’t know how it will impact anything. I think Phil’s his own man. Yes, he’s getting the job, in part, I would probably guess, because David is comfortable with him and knows him well. But he’s still got to prove it.”

Otherwise, Miami will soon find itself once again trying to find the right coach to lead them.

‘Out of hospital’: Lewy marks new post-Messi era
Sources: Chelsea to battle City for Cucurella
What do the big Premier League clubs have to sort before transfer deadline?
Lewandowski clears the air with Bayern visit
Sources: Barcelona race to register new signings