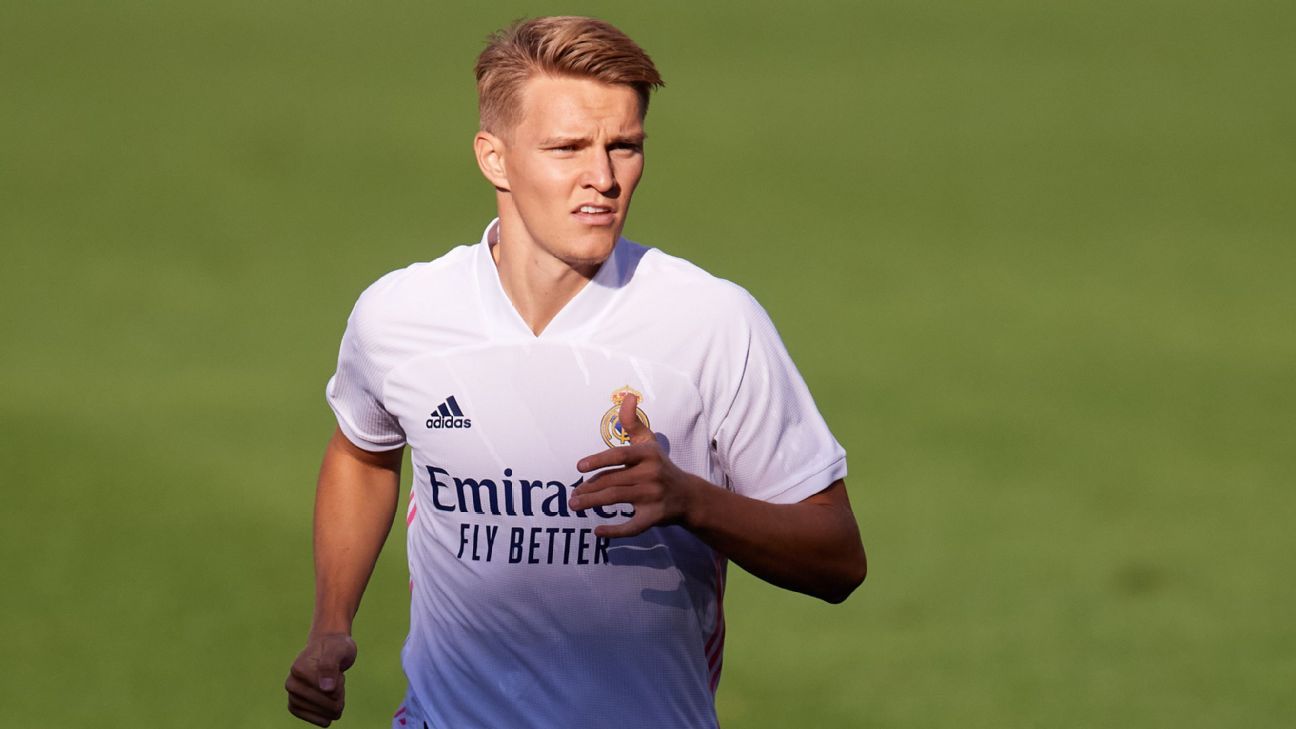 Most players call going to Real Madrid a dream; Martin Odegaard called it “no drama.” The truth is that it wasn’t what he wanted — not yet — but when the phone rang in August 2020, he had little choice but to return to Valdebebas and the club he’d first joined five years earlier as a 16-year-old. Five months later, he has gone again: signing for Arsenal on loan.

In the summer he will be back, or so they say. And then he can start again. For now, though, he’s gone, taking a sense of missed opportunity and arrested development with him — perhaps a touch of regret, too. The most disappointing thing about Odegaard’s departure is that it was so predictable and so avoidable. If only they’d stuck to the original plan. If only there had been a plan.

Real Madrid had agreed that Odegaard would join Real Sociedad on loan for two years. “Martinxo,” they called him, and he was happy there — it wasn’t just because Donosti might be the most beautiful city in Spain and he lived a short stroll from the Ondarreta beach. Until lockdown, he was arguably La Liga’s best player, a midfielder of vision, touch and mobility.

At 22, he had time on his side and was improving fast. He was in the perfect place at Sociedad, handed responsibility and opportunity, the chance to lead. There was a manager who understood young players, a squad full of talent and ambition, driven and emerging together, and an atmosphere unlike any he had experienced before. A place he intended to be for another year, at least.

But then in August, Real Madrid lost to Manchester City in the Champions League. There was no money for signings, but there was a “signing” they could make for free: one of the best players in the league — post-lockdown, it’s true that Odegaard’s impact had diminished — was theirs contractually. They had agreed two years: la Real had wanted it, he had wanted it and Madrid had wanted it. But now, they decided to cut it short.

“I got a call from Madrid saying they wanted me to come back,” Odegaard said while on international duty at the end of 2020. “It was natural, and it was done quickly. It was no drama. There was no big argument.” Asked if he spoke to Zidane, he replied: “Yes. Both he and the club wanted me, and that’s what happened. They wanted it and so we did it.”

He was hardly giddy with excitement.

It had happened overnight, without warning. Real Sociedad had been left “orphaned,” in the words of full-back Nacho Monreal. The sporting director admitted they had been “caught wrong-footed” and that the recall had “damaged us.” When the idea that the loan deal might be cut short had been floated a couple of months earlier, when someone suggested Madrid might unilaterally recall Odegaard, he had said: “there are some agreements that go beyond someone’s word.”

Now Odegaard was gone. La Real‘s response was swift — David Silva signed and joined within 24 hours — and all they could do was wish the Norwegian well, which they did. He had performed superbly for them and was popular, too. They had been happy, and so had he. So much so that once he chose to leave Madrid this week, everyone’s first thought — his and theirs — was let’s get back to together.

Forget hindsight, that marvelous and easy currency in which we all deal; even then, the day he went back, you wondered if the time was right, if there was reason enough to rip up the original plan. Hoped that the opportunities were real, that there was a plan for him. Doubted that things could be the same, that there would be a genuine a chance of continuity, the patience to put it into practice. Doubted too the official discourse: that Zidane had demanded this.

And so, with a certain inevitability, it proved.

This week, Martin Odegaard told Real Madrid that he wanted to leave. He wanted to play; he didn’t want to wait. The last time we saw him, it was as he ran up the pitch alone and after the game, training on his own. He had started just three times. He has not played a full 90 minutes once. In total, he has been on the pitch for just 242 minutes this season. There have been no goals, no assists. At this stage last season, he had played all but two games, scored four goals and provided five assists. Only Mariano Diaz, Eder Militao, Luka Jovic, Alvaro Odriozola and Andriy Lunin have played less.

That was always a possible outcome, though probably not to this extreme. Real Madrid is different; the competition is more intense, opportunities rare and continuity rarer still. Patience may be a virtue, but they don’t have the time, nor much space for personal development.

Odegaard did get chances to begin with: his three league starts were Sept. 20 and Sept. 26, the first two games, and Nov. 21. Yet he admitted that they had not talked about his position or where he might perform the best. The No.10 role doesn’t really exist at Madrid, as many players have discovered before him; the position and role that allows players to shine and attracts Madrid in the first place is the one they’re least likely to hand you when you get there. You don’t get a team built around you at the Bernabeu.

There are other reasons he hasn’t played since: there was a knee injury, and a positive COVID-19 test, too. Zidane wanted Odegaard back, the official line says; it was the coach. Yet that was in the context of an inability to sign anyone else, rather than the demands of a manager determined to make him the centrepiece of his project. And in Odegaard’s absence, the team took shape without him.

There’s also a simple truth: if the men competing with you for a place are Toni Kroos and Luka Modric, your chances will be limited. If Modric refuses to grow old and performs as he has this season, then forget it. And so a familiar-looking team emerged, which is something that causes tension between the club and its coach, another reason why returning might not have been the right move at the right time and with the right people. That in turn reveals a strain within, a disconnect between planning and playing, between now and next. Between construction and competition. How to find the right moment to move on, when to renew. It’s not easy.

In the meantime, things slip. Progress slows, or reverses. Tomorrow never comes, plans are not realised because they can’t be, because there’s too much to do first; there’s too much at stake. And then, even the now looks less secure. A feeling of uncertainty lingers, maybe even of decadence. Writing in El País, David Alvarez cites a quote from philosopher Antonio Gramsci that sums it up quite nicely: “the old is dying and the new cannot be born; in this interregnum a great variety of morbid symptoms appear.”

That new generation can’t quite come together.

Here, Odegaard is just another example. Financial reality has seen a shift in Madrid’s policy — their focus now is on signing younger players, those who will be the best, not so much those who already are. But for a player to be the best, not only do you have to identify him, but he has to play. And few of those who have arrived at Madrid have done so. Instead, there are familiar faces on the field. Old ones.

When Zidane returned to Real Madrid, he said that he would be making changes, but in terms of personnel, there haven’t been many. The team that won the league was not a new side, nor was it one that rotated. Eight players started more than 20 league games, and all of them were already at the club. If earlier in the season it so often felt like Madrid needed Fede Valverde, the one player who brought them to life, and while Vinicius Jr. had decisive moments, in the end, it was a title won by the old guard: Thibaut Courtois, Dani Carvajal, Sergio Ramos, Raphael Varane, Ferland Mendy, Casemiro, Kroos, Modric and Karim Benzema were the spine of almost every XI.

In recent weeks, Lucas Vazquez and Marco Asensio have joined them. Only Mendy is new, a player not there the day Zidane went back. Only he and Courtois had not played in the 2018 Champions League final. Money was spent and a lot of it, signings were made, but their impact was limited. Eden Hazard, their most expensive player ever, has struggled with injury and done almost nothing.

In Hazard’s case, it is not for want of opportunity: Zidane plays him whenever he can. Others could argue that it is. Brahim Diaz is in Milan, Achraf Hakimi at Inter, Dani Ceballos at Arsenal, Sergio Reguilon at Spurs. All left seeking minutes not offered at Madrid, a chance to prove themselves.

Luka Jovic returned to Germany and scored more goals in 28 minutes than he had in a year-and-a-half in Spain. Gareth Bale and James Rodriguez are a different case, but they have gone too. Marcos Llorente has gone to Atletico, where he has been a revelation. Even Valverde and Vinicius have slipped from the side. Valverde has started fewer than half the games, Vinicius the same. Rodrygo has started just four times in the league. Mariano has played 207 minutes. Odriozola has played 57. Youth development isn’t happening.

So here comes the debate: are those players not really good enough for Madrid? Has recruitment failed? Or would they be playing if they could? The club certainly blames Zidane, which of course they would. Or at least, they question his reluctance to embrace certain footballers. They distrust, and even resent, his faith in his players and his lack of it in others. But he is the one who has to get results, not them. And, well, he does. This is Real Madrid, not a finishing school.

You may also ask yourself: would I really play Ceballos or Odegaard over Modric? Odriozola over Carvajal? Jovic or Mariano over Benzema? And this is the team that won the league, remember.

“It’s difficult to play regularly if you’re under 24,” Ceballos said. Odegaard knew that. He hadn’t planned to be back in Madrid yet, still less pressed for it. They called, he went. It was early, too early probably, but maybe it would work. “No drama,” he called it.

But it became one.

“It’s easy to say it’s the manager’s fault,” Zidane said this past week. “But you have to prove yourself with the competition there is here, which is fierce. You have to show it.”

At Real Sociedad, Odegaard did. Now he’s off to try to do so again.

Euro revenues up 10% in 2020-21 despite COVID
Tuchel, Conte revel in pair of sideline faceoffs
100 days to 2022 World Cup: Why your team will (and won’t) win in Qatar
Brazil-Argentina qualifier won’t be replayed
Social media reactions to Man United’s terrible loss against Brentford