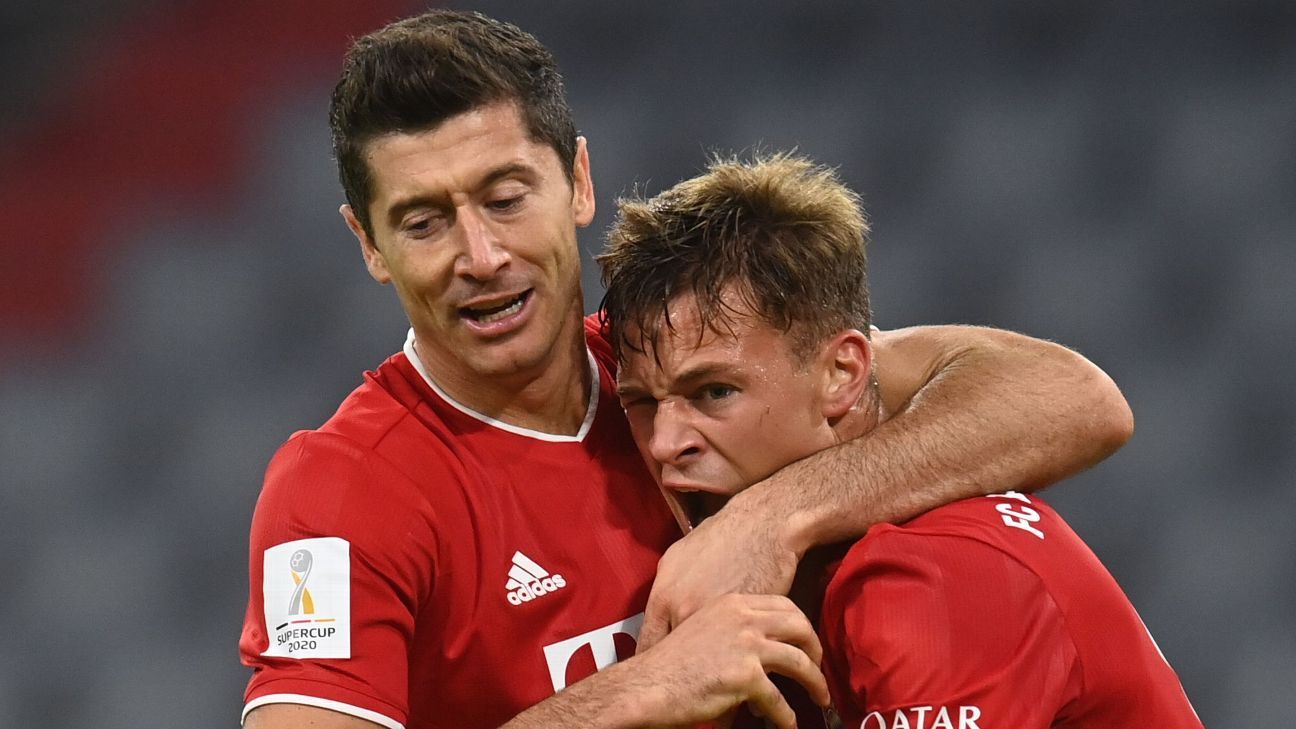 As with most aspects of daily life, the timing of everything in this season impacted by the pandemic is just a little bit off. Traditionally we hit the Bundesliga winter break right before Christmas, allowing us to reflect and take stock at the halfway stage, but in 2020-21, there are no such luxuries. The midway point fell later than usual, after the recent midweek fixtures, with no real time to gather thoughts or to assess who has performed superbly, and who has room for improvement — or, “luft nach oben,” (“air upward”) to use the German expression.

Speaking personally, the absence of travel this term has had one benefit, namely being able to watch games in their entirety that I might have missed in the past while on various trains and planes. Of course, this is one of the many wonders of ESPN+ (where you can stream every Bundesliga match live).

So the team of the “Hinrunde” — the first half of the season — is based on having spent more time than is normal with eyes and ears glued to the Bundesliga. It is by no means a definitive list, merely my own rankings.

Goalkeeper: Manuel Neuer — Given Bayern Munich‘s well-documented defensive problems, you might think this would be a year not to select him. On the contrary, I would argue that without the finest keeper in the world, the “Rekordmeister” (“Record Champions”) would have been even worse off. It’s hardly Neuer’s fault that players in front of him have all underperformed; indeed, they can be thankful Neuer has met his usual high standards. Forget his own run of 11 games without a clean sheet, between late October and mid-January, and focus instead on his key interventions at the right time.

Right-back: Stefan Lainer — Borussia Monchengladbach‘s Austrian full-back is following in the footsteps of his father Leo, who also represented his country in that position. Lainer is at the peak of his powers and has just about everything a coach looks for in a modern player: tactically sharp, wholly committed and rarely has a bad game. The best right-back in the league this season.

Centre-back: Matthias Ginter — Staying with Gladbach, Ginter is a defensive leader who’s consistently been underrated throughout his career. He has a no-frills quality to him, but is the master of winning his challenges and outwitting direct opponents. Ginter is consistently a standout. I’ve selected him over Mats Hummels, who had a nightmare in the last game of the “Hinrunde” away to Bayer Leverkusen.

Centre-back: Edmond Tapsoba — Talking of Bayer 04, Tapsoba’s rise in less than a year has been meteoric. There’s almost nothing the 21-year-old does badly in a defensive sense. Assured on the ball and good in the air, Tapsoba looks as though he has been playing Bundesliga football his entire career. Better yet, the Burkina Faso international is going to get even better.

Left-back: Angelino — To be fair, RB Leipzig‘s tenacious Spaniard is mostly used as a left wing-back rather than a true left-back in a back four, but he gets into my team without any hesitancy. Angelino is especially dangerous going forward, possessing a genuine goal threat as well as an ability to set up chances for his teammates.

Defensive midfield: Joshua Kimmich — This one is easy. No one interprets or personifies the position better than the man who has emerged as one of the world’s best. It was no coincidence that Bayern’s defensive issues in November and December manifested themselves when Kimmich was absent due to a meniscus injury. The man who hails from the town of Rottweil, home of the famous dog, never tires of snapping at opponents’ heels and looking cool and cultured while doing it.

Defensive midfield: Marcel Sabitzer — My second Austrian selection and although competition was fierce in this sector of the pitch, I just couldn’t find a way to leave out Leipzig’s beating heart. Technically and tactically superb, Sabitzer keeps opponents on their toes, whether with a well-timed arcing pass or a swerving shot from long range.

Attacking midfield: Lars Stindl — At 32, the Gladbach captain is playing arguably the best football of his career. I sometimes just spend five minutes watching only him, admiring his movement, his runs and his game sense. Few players dictate the tempo and rhythm of a game as well as Stindl. Even now, he could offer something to Germany‘s national team. He is the subtle component part of Gladbach’s multifaceted power attack.

Attacking midfield: Thomas Muller — Remember when Muller’s best days were supposedly behind him? It seems crazy now looking back, doesn’t it? The “Raumdeuter” (“Interpreter of Space”) extraordinaire has cemented his place in the annals of German football as one of the best attacking all-rounders of all time, and his influence at Bayern shows no sign of waning.

Forward: Erling Haaland — Borussia Dortmund‘s season has been riddled with mistakes, but that doesn’t extend to the Norwegian Player of the Year. As with Kimmich at Bayern, Haaland’s spell on the sidelines in December saw his team slump. At times, you feel it’s a matter of just feeding him the ball inside the box and letting him find a way through with that educated left foot, almost knowing that he’ll score. At 20, Haaland is already world-class. How good might he be at 25?

Forward: Robert Lewandowski — I grew up revering the great Gerd Muller, but Lewandowski is on a pace to top Muller’s record for goals in a single season: 40, set in 1971-72. I must admit I doubted it would ever be beaten, and yet Lewandowski at 32 seems to improve with age. His goals are rarely mere tap-ins, and there is a certain joy in watching his cold-blooded routine when taking penalties.

MVP: Lewandowski — When you score a best-ever 21 “Hinrunde” goals for a team struggling defensively, on the back of being named FIFA World Footballer of the Year, you deserve this award. Nobody does it better than Lewandowski.

Just for fun, here are my transfer “tops” and “flops.” Of the preseason arrivals, who has excelled and who has underwhelmed?

Ridle Baku — There wasn’t much fanfare about the 22-year-old’s move from home city club Mainz to Wolfsburg two games into the new season, but Baku has impressed on a grand scale playing at right-back as opposed to midfield. In fact, I came within a whisker of naming him in my team ahead of Lainer.

Jude Bellingham — The 17-year-old from the English midlands hasn’t gone to Dortmund just to observe and learn. He’s already a frontline midfield contributor, and BVB have faith in his football and his maturity for one so young.

Ritsu Doan — There’s a long-standing tradition of Japanese players finding a home and succeeding in the Bundesliga. Doan, creative and incisive as attacking midfielders go, makes me sit up and take notice whenever I watch Arminia Bielefeld. That they got him on loan from PSV Eindhoven is a feather in the cap for club sporting director Sami Arabi.

Kilian Ludewig — Criticism should be tempered here as Ludewig is only 20, but the FC Salzburg loanee, after a spell at Barnsley, was thrust into the spotlight at Schalke and tasked with solving the right-back problem in Gelsenkirchen. Unfortunately, Ludewig’s performances showed he’s not yet ready for the Bundesliga.

Bouna Sarr — Another right-back, and Bayern thought they were getting a reliable and experienced one in the former Marseille man. As it has turned out, Sarr has been limited to three uninspiring starts, even while the incumbent Benjamin Pavard has been woefully off-form.

Tahith Chong — When Chong joined Werder Bremen on loan from Manchester United, I thought it might represent a new beginning for the undoubtedly gifted then-20-year-old, but he hasn’t done enough in training to merit a regular first-team place. When he has featured under Florian Kohfeldt, the games have largely passed him by.