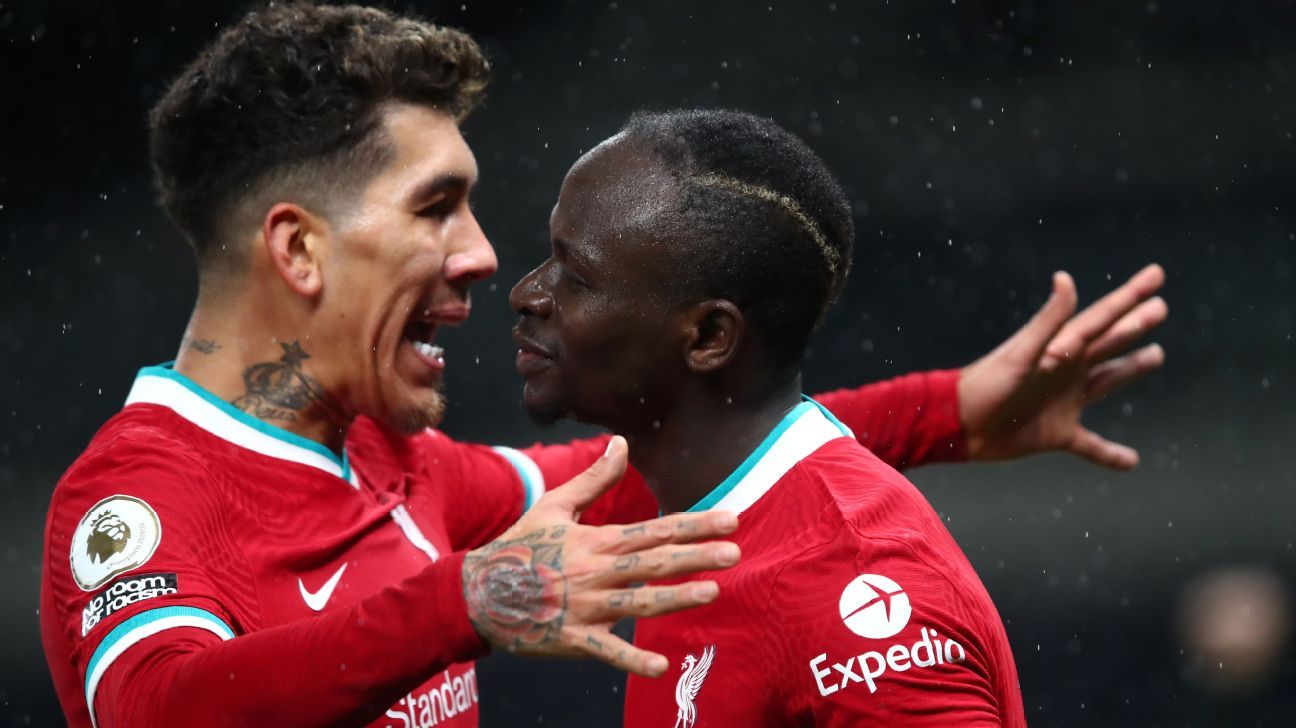 Call off the search — Liverpool‘s front three are back.

Jurgen Klopp had to wait more than a month for a Premier League as his misfiring forwards — Roberto Firmino, Sadio Mane, and Mohamed Salah — endured a spell so lacklustre it led to genuine questions about their durability in defending the title.

Those doubts are not silenced by Thursday’s 3-1 win at Tottenham Hotspur but the sight of Firmino and Mane finding the net — five days after Salah scored twice in Liverpool’s FA Cup fourth-round defeat to Manchester United — could not be more timely with the challenges to come.

– Liverpool ratings: Mane 8/10 as champs get back on track
– Spurs ratings: Lloris 5/10 for lapses on night to forget

“It was good, it was necessary as well,” said Klopp. “It was a good moment to show a little bit. We are still here, which is good to know.

“What I saw today it’s not about shape or form it’s about who we are. That was us. Second half especially it was us, it was a massive fight. The main difference is we score the goals, that helps not only for results but the momentum in the game.

“We missed massive chances against Burnley, tonight we knocked a wall down — that’s good. It is easier to lose [confidence] that’s how it is, but it is possible to get it back as well. It is not a light you can switch on and off. You have to show it in the right moment.”

– How VAR has affected every Prem club this season
– ESPN+ viewer’s guide: Bundesliga, Serie A, MLS, FA Cup and more

The offensive emergence comes a crucial point as the Reds face in-form West Ham United on Sunday before games against Brighton & Hove Albion, Manchester City, Leicester City, RB Leipzig and Everton. It is a run that cannot be negotiated without Liverpool’s attacking triumvirate rediscovering something approaching their best.

Luckily for Klopp’s side, the trio looked more like their old selves on an evening which represented a stern test of the visitors’ resolve after failing to win any of their past five Premier League games.

As for Spurs, Jose Mourinho was typically cautious in his gameplan and have enjoyed many fine days embracing the Portuguese’s pragmatism. Yet there was a sense that he handed the initiative to a Liverpool team keen to play their way back into form.

Spurs lined up with a three-man defence and Matthew Doherty operating at left wing-back. Mourinho rued the absence of Sergio Reguilon in the build-up and it was easy to see why: Doherty is a competent defender but he does not offer the same pinpoint delivery as Reguilon, instead opting regularly to shift the ball back in field when in a position to make space for a cross.

Tottenham sat off Liverpool in their tried-and-tested contain-and-counter approach. The importance of the first goal is paramount when adopting this style and Spurs thought they had it when Son Heung-Min raced clear from Harry Kane’s pass — that combination again — and slotted past Alisson. Replays showed he was fractionally offside. Only in the VAR era.

Mane had already had a good chance before that and was a constant thorn in Tottenham’s side, with Serge Aurier eventually hauled off at half-time for his failure to deal with the threat. It was Eric Dier who made the mistake for Liverpool’s opening goal, however, seemingly leaving Mane’s cross to Hugo Lloris only for the ball to drift between them both and leave Firmino with a tap-in.

It was the Brazilian’s sixth goal of the season and Liverpool’s first league goal in 482 minutes of football. In that time, they managed 93 shots without success.

Kane had been limping for much of the first half after appearing to roll his ankle early on and he did not emerge for the second period. An injury to Kane is what they fear most in these parts — Mourinho’s initial prognosis was vague beyond suggesting to broadcasters “a few weeks, I don’t know” — and Spurs seemingly never believed they could get back into this without him.

Mourinho went to a back four, replacing Aurier and Kane with Harry Winks and Erik Lamela. There was encouragement with Joel Matip adding to Liverpool’s defensive problems by limping off with an ankle ligament injury, replaced by Nathaniel Phillips. But Spurs failed to settle in the confusion, Mane shot, Lloris parried and Trent Alexander-Arnold rifled home to double Liverpool’s lead.

Mourinho was furious on the touchline, his gameplan shot to pieces as Spurs had to open up. Pierre-Emile Hojbjerg scored a superb 20-yarder to halve the deficit but they failed to mount exerted pressure. Salah had a goal ruled out by VAR for a Firmino handball in the build-up before Mane took advantage of poor defending from Joe Rodon to net the third which counted.

Mourinho kep back-up striker Carlos Vinicius on the bench all night and only gave Gareth Bale nine minutes to make an impact.

Spurs’ best games under Mourinho have been founded on minimising individual defensive errors while Son and Kane maximise the counter-attacking moments with ruthless efficiency. With Toby Alderweireld and Davinson Sanchez dropped to the bench, Mourinho appears still to scrambling for his most cohesive unit with Dier the mainstay and an ever-changing cast of characters around him.

The need for a new centre-back this summer is obvious. Mourinho was keen to defend Rodon afterwards, stating “he’ll play the next game for sure” and that he is “not a coward” in ever shying away from possession, but he admitted: “It is a performance totally affected by defensive individual mistakes.

“One thing is mistakes, another thing is not got be good enough. That is a different story. I don’t say that at all, everybody has to assume responsibilities.”

They were well short here at both ends of the pitch, despite Liverpool missing Fabinho as a makeshift centre-back and arriving here low on confidence and wounded pride after their recent run.

They leave reinvigorated after what will feel like a cathartic evening for Liverpool, for none more so than the fabled front three who are missing in action no longer.