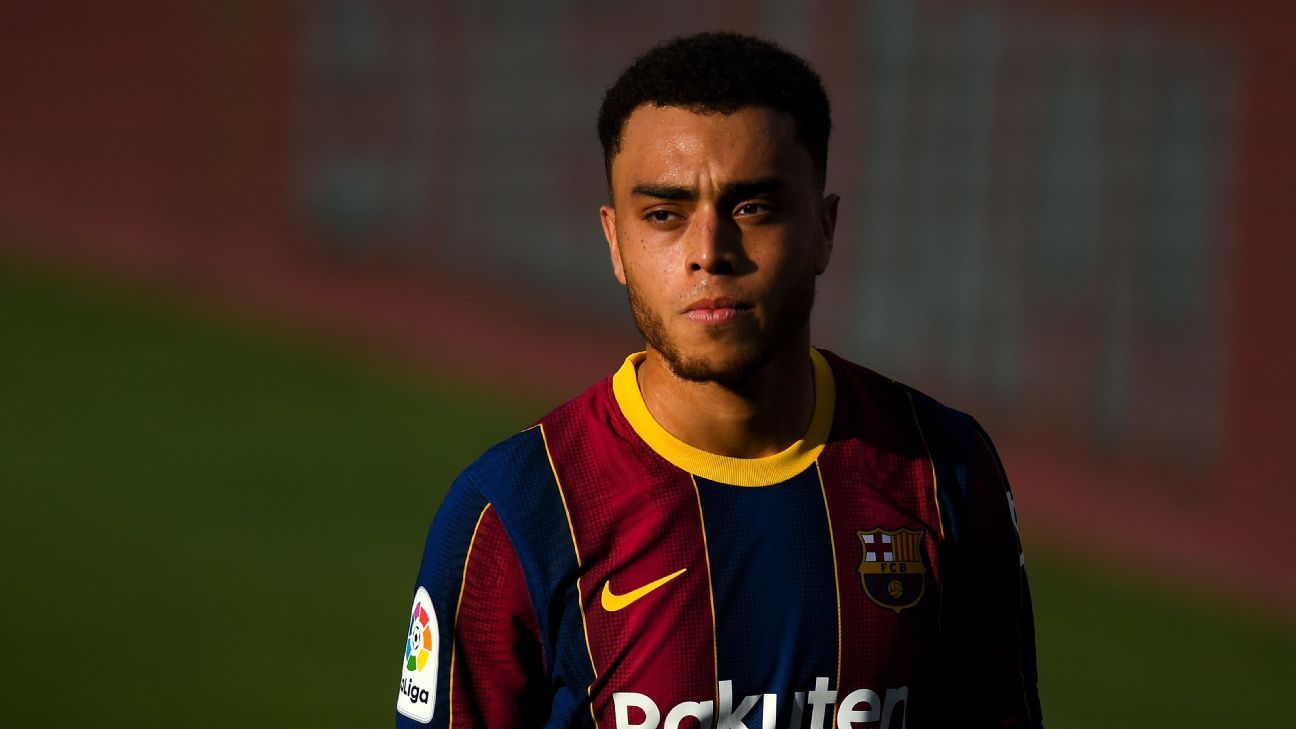 The full-back position has typically been one of sturdy competence for the United States men’s national team. At right-back, you’ve been witness to the Steve Cherundolos and Timmy Chandlers of the world; the pickings have been a bit slimmer at times on the left, but players like DaMarcus Beasley and Fabian Johnson have still brought professionalism and occasionally exciting play to the position. There’s sturdy professional upside, and there’s Jordi Alba– or Dani Alves-level upside: in Sergino Dest, the USMNT now has a starting Barcelona full-back in its player pool.

Dest’s rise from Ajax youth prospect to Barcelona starter took place in what felt like milliseconds. Let’s take a look at what kind of player he is becoming, and what he might have to offer for the U.S. and manager Gregg Berhalter.

Born in the Netherlands to an American father and Dutch mother, Dest made his Ajax B-team (Jong Ajax) debut as a 17-year old in October 2018, less than two months before Berhalter was hired to lead the USMNT. By the following July, Dest had been promoted to the senior squad; he would play in 20 of 25 Eredivisie matches for the Dutch powerhouse in 2019-20, plus 10 of 12 Champions League and Europa League matches.

Having represented the United States at both the FIFA Under-17 World Cup in 2017 and the Under-20 World Cup in 2019, Dest officially committed to playing for the United States early in the 2019-20 season and has since made five appearances for his country. He played most of last fall’s friendlies against Wales and Panama, completing 86% of his passes with eight ball recoveries.

By this point, you could say his status within America’s first-choice lineup had been fast-tracked. Having already played in the Champions League before his 19th birthday, he had moved to Barcelona before his 20th. Despite rampant budget issues, the Blaugrana acquired him on Oct. 1 for more than €20 million and quickly plugged him into the lineup. He’s played in 15 of 20 La Liga matches and played the full 90 minutes in five of six Champions League group-stage matches.

Although he has split his minutes between right- and left-back for the national team, Dest has been deployed primarily on the right at Barca, either because that’s where manager Ronald Koeman thinks he’s most capable or because Alba remains a mainstay at left-back. Dest has logged a goal and an assist, but his primary job has been to move the ball from the second level of the defense to the third. Turns out he’s quite good at it. 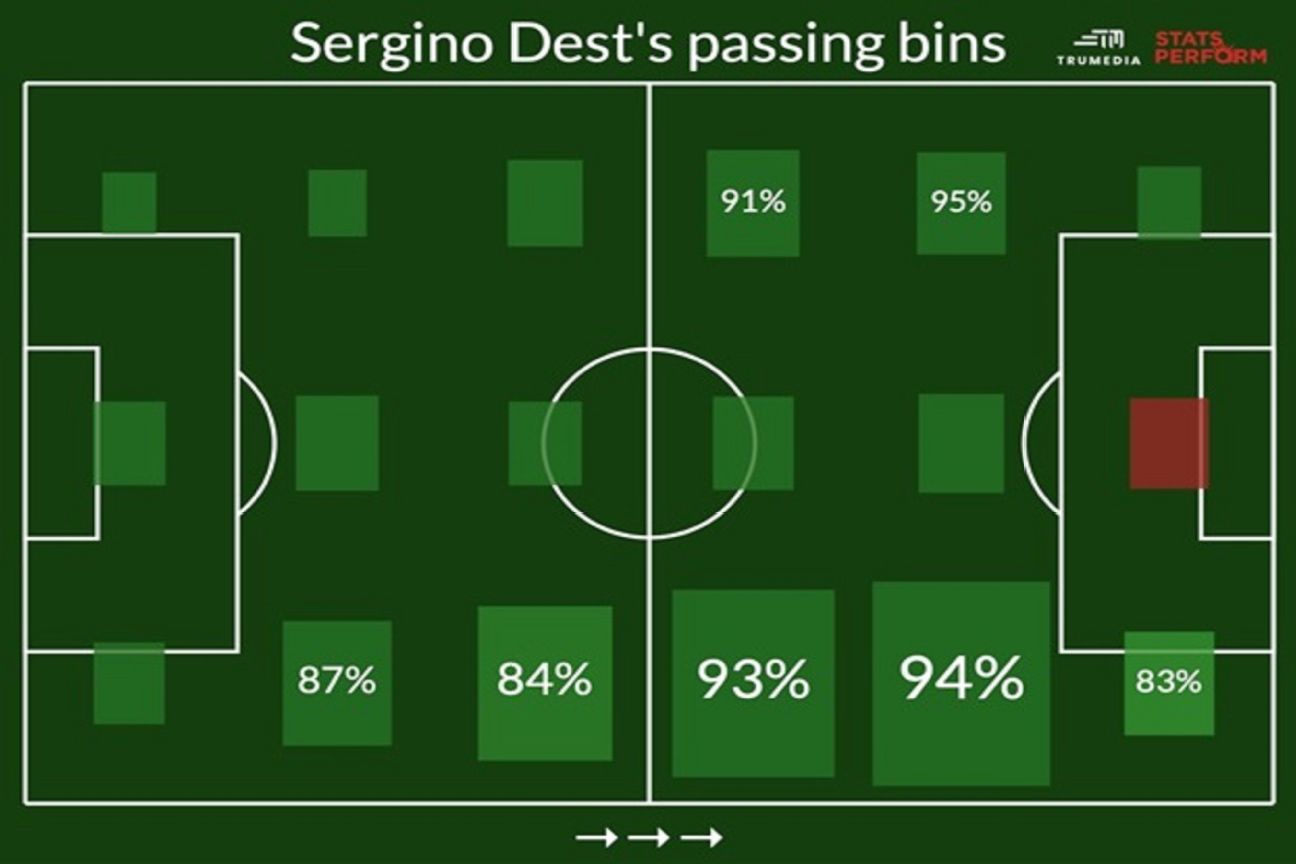 (The above shows where he tends to make the most plays and progressions and, no surprise for a Barcelona player, he spends most of his time way up the pitch.)

The full-back position is a tricky one to evaluate in a statistical sense, as it depends so comprehensively on the system at hand. But comparing him to other full-backs and wing-backs in Europe’s big five leagues, we figure out both his strengths and his specific duties pretty quickly.

Among the 150 big-five full-backs and wing-backs with at least 750 league minutes this season, Dest’s pass completion rate (90.4%) ranks first, as does his completion rate into the attacking third (90.0%). No, these have not been long-distance passes, and yes, a lot of these passes have gone to Lionel Messi, which is to say they are high-percentage opportunities. But his accuracy and his speed on the ball get the ball where it needs to be almost every time. He’s also in the 99th percentile in completion rate from the middle third (92.8%) and in the 93rd percentile from the defensive third (82.6%).

Dest has been excellent at retaining possession — his 12.1 possessions lost per 90 minutes are in the 95th percentile — and he is more than willing to attempt one-on-ones (3.1 take-ons per 90, 55% success rate). Stylistically, he fits nicely with the Kyle Walker or Ferland Mendy type of full-back. Or yes, Alba himself.

One major reason for his high completion rate in attacking positions: he doesn’t attempt crosses. He ranks in the 24th percentile in cross attempts (1.9 per 90) and in the 14th in cross completion rate (10.5%). This is part of Koeman’s general approach: Barcelona attempt only 14.6 crosses per 90 minutes, third lowest in La Liga. This promotes ball retention and through short passing patterns, take-ons and, yes, Messi, Barcelona still lead the league in chances created.

For a possession-heavy team like Barcelona, the most direct effort in defense is not allowing the opponent to have the ball. Dest is brilliant in that regard, and that’s good because he’s got room to grow in the actual defense department. He ranks in the first percentile — the very bottom, in other words — with 9.1 defensive interventions (defined as ball recoveries, tackles, interceptions, clearances, blocked shots and aerials won in the defensive third) per 90 minutes. He averages 5.1 ball recoveries per 90 (38th percentile), but only 0.4 pass interceptions (first percentile). He’s good for the occasional tactical foul, but he was not acquired for his tackling ability, which is still very much a work in progress.

All of this fits with Barcelona’s defensive profile at the moment. Like plenty of possession teams, the Blaugrana get caught a decent amount on counter-attacks; they are seventh in La Liga in shots allowed per possession (0.10), but they’re sixth worst in xG allowed per shot (0.13). Dest’s stats appear to very much be a product of the system, for better and worse. When asked to apply more pressure, it seems like he can — he averaged 11.2 defensive interventions per 90 last season with Ajax and 13.4 with Jong Ajax the season before.

Still, Koeman wants to build from the back and hog the ball, and Dest is a lovely piece in this regard.

Berhalter wants to do these things, too. Since the start of 2020, the U.S. has played five friendlies, three against vastly overmatched CONCACAF opponents (Trinidad & Tobago, Panama, El Salvador) and two against more solid foes (Wales, Costa Rica). Against the former, they romped by a combined 19-2; they struggled offensively against the latter, beating Costa Rica 1-0 and drawing 0-0 with Wales.

– The U.S. overwhelmed the three overmatched foes with pressure and possession. They possessed the ball 64% of the time, completed nearly 88% of their (mostly short) passes, made more than 50 ball recoveries in each match and allowed just 9.3 passes per defensive action. (For context, only three big-five teams have allowed fewer than 9.3 PPDA so far this season: Leeds United, Paris Saint-Germain and Bayern Munich.)
– Against Wales and Costa Rica, the offense disappeared, but the principles remained: 61% possession, 88% completion rate, 49 ball recoveries per match and a frantic, Ajax-like 8.6 PPDA.

Berhalter is doing a solid job of establishing his intended principles — granted, against mostly sketchy competition — and he’s doing it despite having yet to really narrow down the player pool. In these five matches, for instance, he’s played 11 different full-backs for at least a handful of minutes — everyone from potential regulars like Dest, Boavista‘s Reggie Cannon and the Colorado Rapids‘ Sam Vines, to less-tested youngsters like Atlanta United’s George Bello and the LA Galaxy‘s Julian Araujo.

It’s exciting, then, to think about what might be possible with a stable, truly first-choice lineup. It’s also exciting to realize that, in addition to Dest, the possession-and-pressure theme is pretty constant with the teams a lot of the members of this potential first-choice lineup play for.

– Winger/attacking midfielder Christian Pulisic — Chelsea: The Blues’ possession rate has been more than 60% for Pulisic’s entire tenure, and new coach Thomas Tuchel, who worked with Pulisic at Borussia Dortmund, is a PPDA true believer.
– Winger Giovanni Reyna — Borussia Dortmund: BVB have the highest possession rate (62%) in the Bundesliga and are second in PPDA (10.3), and despite having just turned 18, Reyna has already logged more than 1,500 Bundesliga minutes with the club.
– Midfielder Weston McKennie — Juventus: McKennie arrived with new manager Andrea Pirlo, who is quickly turning Juve into a modern possession club: they’re second in Serie A in possession rate (58.6%) and first in PPDA (9.9).
– Defensive midfielder Tyler Adams — RB Leipzig: The Red Bull machine has quickly become an avatar for modern soccer, and flagship Leipzig are currently both excellent (Adams scored the winning goal to send them to the Champions League semifinals last season) and possession dominant.
– Goalkeeper Zack Steffen — Manchester City: Steffen played for Berhalter’s Columbus Crew SC and has now made eight appearances for Pep Guardiola’s Man City. Safe to say, he knows what’s required of the modern sweeper keeper and play-out-of-the-back intentions.

The lineups the United States field when the real matches begin — Olympic qualifying in March, the CONCACAF Nations League finals in June, the Gold Cup (and perhaps the Olympics) in July, World Cup qualifying in the fall — will boast an increasing amount of not only young talent, but also tactical familiarity.

Dest will almost certainly be a huge part of Berhalter’s plans. When he signed with Barca, he told ESPN, “You want to play every game against the best opponents and see where you’re at right now with your development. I think there’s enough room for me to improve, but I am on a good [path] and I like these games.”

With each level he’s advanced — from the Dutch second division to the Dutch first division to La Liga — his pass completion rates have improved, and his expected assist totals have remained steady. He might not be Alba or Alves yet, but he’s meeting the challenge. That should be very good news for both his and the USMNT’s future.