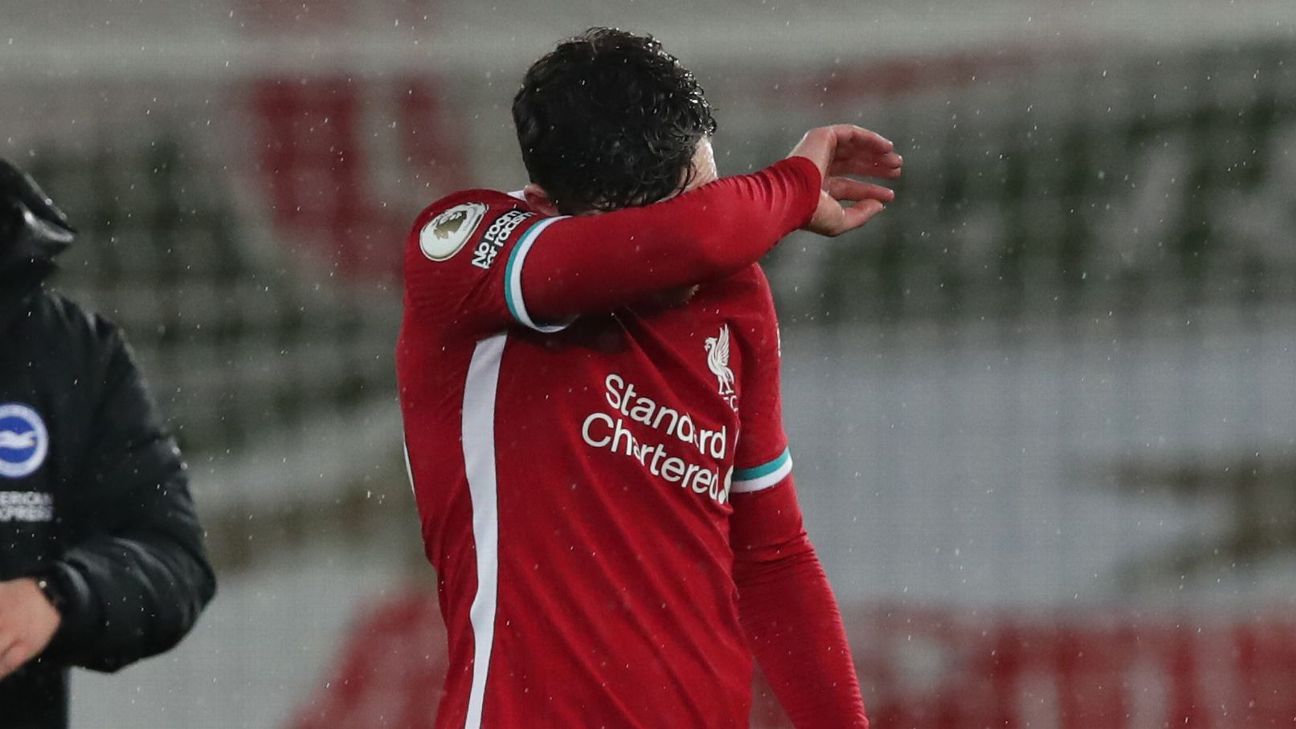 The defeat — Liverpool’s second successive loss at home after a run of 68 Premier League matches unbeaten at Anfield — left Jurgen Klopp’s side seven points adrift of leaders Manchester City, who have a game in hand.

Liverpool and City, who occupied the top two spots in each of the past two seasons, meet at Anfield on Sunday, though Robertson said this is not a clash between two title contenders this season.

“Any game against Man City is a big one,” Robertson said after the defeat to Brighton. “As this moment stands, we’re not in the title race. We are seven points behind them and they have a game in hand.

“I’m sure they’d say the same if they were potentially 10 points behind. We need to get back to the Liverpool everyone knows. We’re still a good team. We don’t turn into a bad team overnight.”

“Brighton were the better team,” he added. “We were hugely disappointing all over there park. You have to give the the team credit for playing well.

“They created chances, pressed us — did everything we wanted to do. We didn’t really do anything of note. With a long record of going unbeaten we’ve lost two. When you don’t show up you don’t get results.

“We prepare for every game different. It’s just not clicking. We need to find a way to get results, especially at home. You can do everything in training.”

Klopp was equally disappointed and blamed the defeat on fatigue caused by successive away matches before this game, 3-1 wins for Liverpool against Tottenham Hotspur and West Ham United, which Liverpool won 3-1 before this game.

“Disappointed, nothing to smile about really,” Klopp said. “Tough one to take.

“A really tough week, two away games, two very intense games and tonight we looked really like we weren’t fresh enough mentally and physically. A lot of moments where we gave the ball away too easily, in moments the boys looked tired mentally.

“I know they can pass the ball from A to B but it didn’t happen, we made it easy for Brighton but they also did really well. Brighton deserved to win, no doubt about it.”

Liverpool have not won a league game at home since Dec. 16 and have scored just once in that time. Since Sadio Mane netted against West Bromwich Albion, the champions have played 348 goalless minutes..

“For me it’s more important to find an explanation for why we lost this game and understand what happened here tonight,” he said. “We didn’t look convincing.

“Nothing good to say about it, it’s over. Whatever set back we have to try and come back but we make more changes and then we have no rhythm so it’s a problem. This week was hard, we lost our second home game in a row, but we can’t change anything now we have to work with it.”