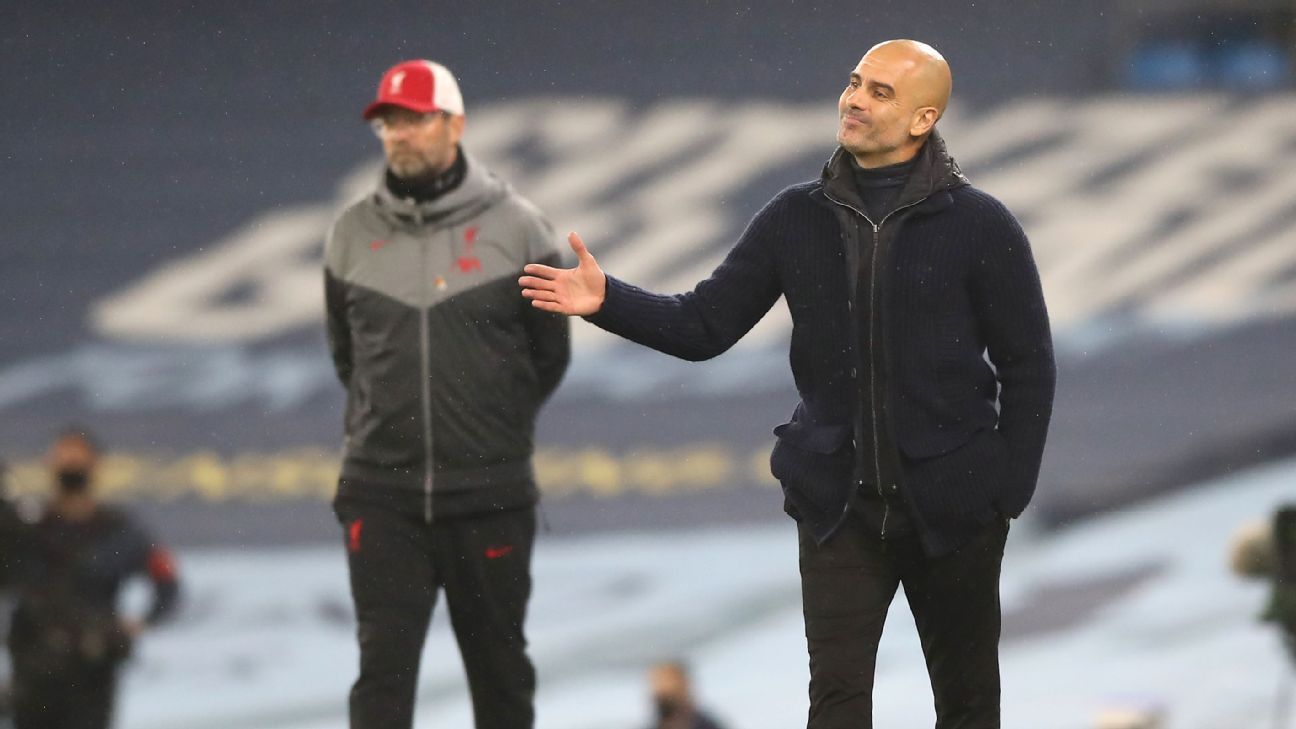 Pep Guardiola has hit back at Jurgen Klopp’s claim that Manchester City had a “two-week break” because of a COVID-19 outbreak at the club by saying the Liverpool boss “knows it’s not true.”

Ahead of their meeting at Anfield, Klopp suggested City’s good run of form has been helped by “a two-week break for COVID reasons”.

In reality, City had eight days between games when their fixture with Everton was postponed in December and Guardiola said he plans to address the comments with Klopp when they go head-to-head on Sunday.

“He made a mistake, it was two months off, or three months off? No, [it was] four. Four months off,” Guardiola told a news conference on Friday.

“That’s why we are in top form right now. Jurgen has to see the calendar again.

“We had COVID, we have one week and we played with 14 players at Stamford Bridge, but maybe I’m wrong and it was not two weeks, it was three or four weeks. Tomorrow when I see Jurgen I’ll say to him: ‘How many weeks or days were we off?’

“I will tell him tomorrow. He knows it’s not true. Come on! Nobody in the Premier League has had two weeks off.”

Guardiola and Klopp know each other well from their time together in the Bundesliga and the City manager admitted he was “surprised” at the dig from his counterpart.

“I’m not irritated, I didn’t expect it, not from him,” Guardiola said.

“I’m surprised. I thought Jurgen was not that type of manager, like other ones who are usually doing it. I didn’t expect that comment. But maybe it was a misunderstanding from him. If he sees the calendar again he will realise it was not two weeks, it was two months.”

City head to Liverpool looking for their first win at Anfield since 2003.

Guardiola’s team have won their last 13 games in all competitions and sit three points clear at the top of the Premier League table with a game in hand.

Meanwhile, injury-hit Liverpool have won just three of their last 10 games but Guardiola was quick to point out that Klopp’s team had enjoyed a summer break totalling 48 days while his players were forced to return after a 37-day break following their commitments in last season’s Champions League.

“Of course [he] forgot it,” Guardiola said. “We didn’t forget it, but they did of course.

“When it’s happened it’s happened. When you have a lot of COVID cases in the beginning and injuries, when we had COVID before the Everton game, we said: ‘It is what it is.’ We had 14 players and we go there [to Chelsea].”