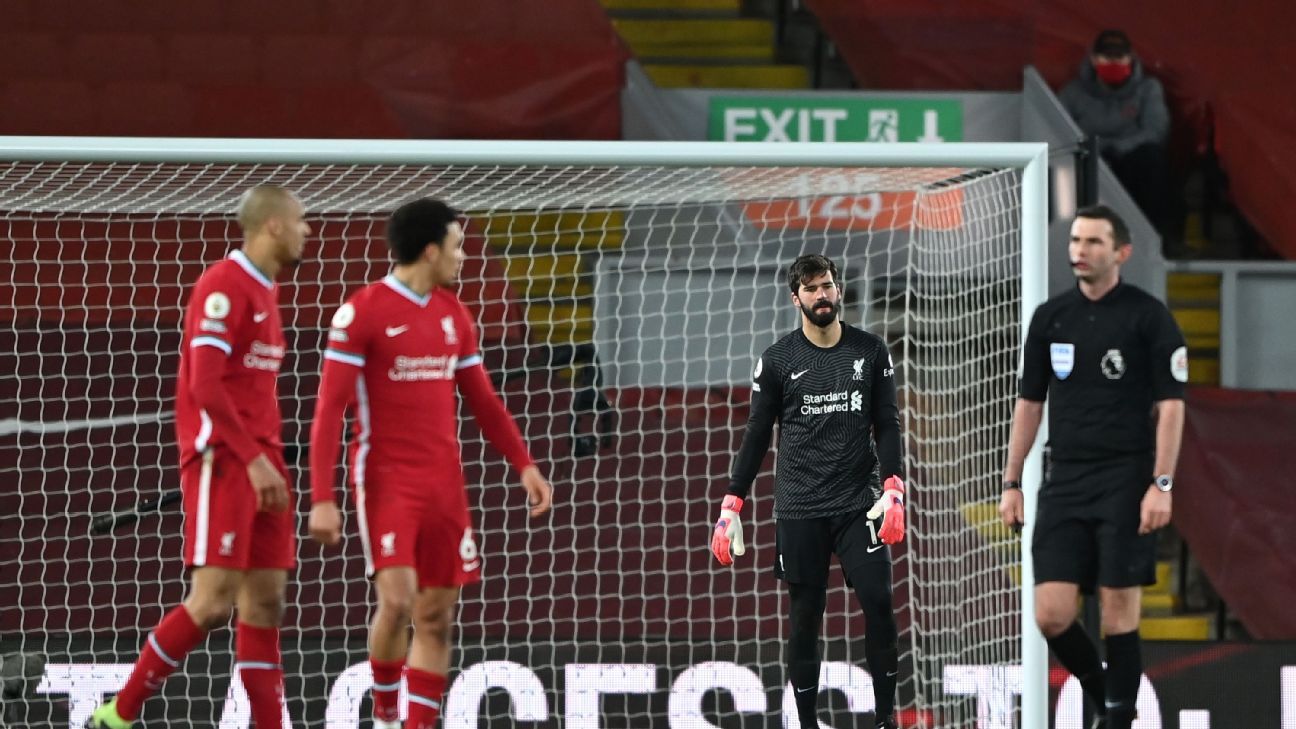 Liverpool‘s title defence continued to fall apart as they were humbled 4-1 by league leaders Manchester City at Anfield on Sunday.

Ilkay Gundogan was at the heart of the drama throughout with his brace more than making up for a shocking penalty miss. Mohamed Salah had managed to pull Jurgen Klopp’s men back into the game from the spot himself, but between Gundogan’s second, Raheem Sterling’s header and Phil Foden’s thunderbolt, it was the champions-elect who walked away with the victory off the back of two goalkeeping howlers from Alisson.

After going 68 games unbeaten at home, Liverpool lost for the third straight time at Anfield, the first three-game losing streak for the Reds at home since 1963.

For the first hour or so there was a decent structure within the back four which, given their injury problems, was impressive. That changed in the last half hour or so, as repeated lapses in concentration were ruthlessly punished.

The hosts gifted Manchester City possession time and time again and while that may have been to their benefit defensively, it showcased the growing hesitancy that is bleeding into their style — which comes from a lack of confidence in front of goal. They were often slow, lethargic and constantly held back when in dangerous positions on the counter-attack.

4 — Klopp stuck with what he knows by not risking either of his new centre-backs for this game, and that conservative approach was pretty evident throughout the course of the encounter. There was a real lack of urgency from the Reds in comparison to what we’re used to seeing from them, and the manager’s substitutions clearly showed that they were playing for a draw after the equaliser.

GK Alisson, 2 — After a solid display and a good save prior to City’s opener, Alisson quite literally handed the visitors all three points with two disastrous errors in the space of three minutes.

DF Trent Alexander-Arnold, 4 — His attacking prowess is still one of the Reds’ most lethal weapons, as he showed with the long ball through to Salah that led to the penalty, but he was outmanoeuvred on several occasions by Sterling in crucial moments.

DF Jordan Henderson, 5 — The Englishman looked assertive in a makeshift CB/DM role but was regularly caught too far forward and, understandably, out of position.

DF Fabinho, 5 — His initial discipline and hard work in the first half-hour was undone by continually struggling with Foden and giving away a careless penalty.

DF Andrew Robertson, 5 — Despite allowing City a lot of space down the flank, he was generally one of Liverpool’s better players — right up until he gave Foden too much space for City’s fourth.

MF Thiago Alcantara, 5 — Recovered well from a poor early challenge that could’ve earned him a red card, and yet his silky passing wasn’t enough to help create any real momentum.

MF Georginio Wijnaldum, 4 — Was like a deer in the headlights for large spells of the game and can be held responsible for not tracking his man in the lead up to two of the opposition’s goals.

MF Curtis Jones, 7 — The youngster was confident in making quick and important judgements, and because of that, the decision to take him off deserves to be questioned.

FW Mohamed Salah, 7 — Was silent for most of the afternoon on Merseyside and yet still managed to win a penalty and convert it in style.

FW Roberto Firmino, 6 — The Brazilian fought hard, tried to create opportunities and was the most active of the front three, even if he did fall away in the second half.

FW Sadio Mane, 5 — Sloppy, uninspired and absent will likely be three of the primary words used to describe a poor day at the office for Mane.

DF Kostas Tsimikas, N/R — Helped to steady the flow of the game for Liverpool after they went 4-1 down.

MF James Milner, 5 — Was often chasing shadows as Pep Guardiola’s side turned things up a notch in the second half.

MF Xherdan Shaqiri, 5 — Couldn’t really get anything going upon being introduced in front of a rampant City midfield.