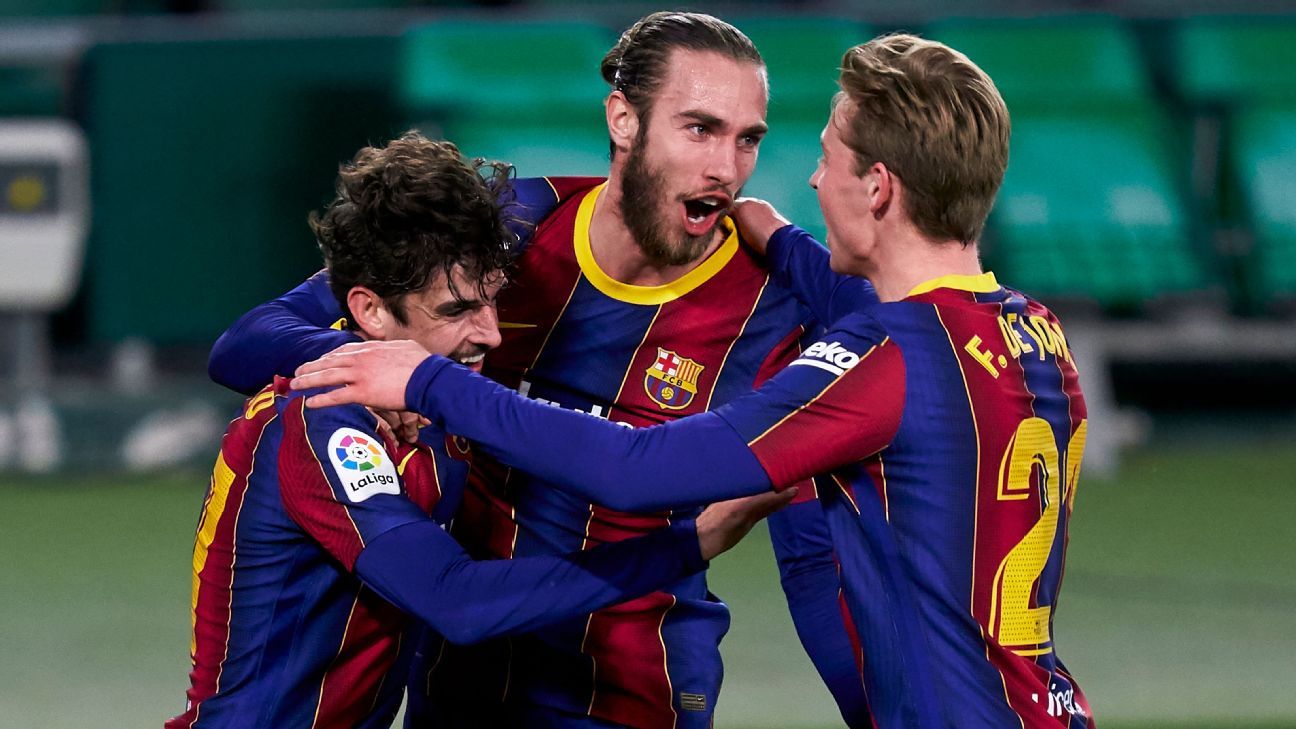 Lionel Messi came off the bench to inspire Barcelona to a 3-2 win over Real Betis with Francisco Trincao scoring a dramatic late winner.

It took Messi just two minutes to cancel out Borja Iglesias’ first-half opener after coming on in the 57th minute. Ten minutes later, he turned provider, linking with Jordi Alba before Victor Ruiz turned it into his own net.

Barca’s lead was short-lived, with Ruiz making up for his error at the other end to bring Betis level again, only for Trincao’s first goal for the club, a stunning effort from the edge of the box, to steal the points for Ronald Koeman’s side in the 87th minute.

For the second time this week, Barca came from behind to win a game — they won 5-3 against Granada on Wednesday in the Copa del Rey. No one can accuse this side of lacking fight.

The Blaugrana are now unbeaten in 11 league games, winning their last six, and are seven points behind leaders Atletico Madrid, who do have two games in hand.

For the match-winner, Trincao, this was his first goal for the club, coming in his 27th appearance. He was unlucky not to score against Granada, rattling the bar, but he could not have hoped for a more important goal to open his account.

Barca were exposed defensively by Betis, conceding two cheap goals, one from a set-piece, and that remains a concern with Paris Saint-Germain due at Camp Nou in nine days. In further defensive problems, Ronald Araujo went off with a sprained ankle after 11 minutes. With Gerard Pique also out, Barca’s options at centre-back are extremely limited.

Meanwhile, the difference between Barca with Messi and without Messi was once again evident — there’s still a certain amount of Messi-dependence.

7 — Koeman’s decision to make so many changes looked set to backfire before his substitutes saved him. The Dutch coach left Messi, Pedri and Frenkie de Jong on the bench with an eye on Wednesday’s Copa del Rey semi-final first leg against Sevilla.

GK Marc-Andre ter Stegen, 7 — Not at fault for either of the goals and made several smart saves to keep the score level at 2-2.

DF Oscar Mingueza, 6 — Struggled defensively at first but grew into the game. Didn’t add enough in attack, although he did force a save from Joel Robles early in the second half.

DF Ronald Araujo, N/R — Forced off before the game even got going.

DF Clement Lenglet, 6 — Given he was playing in a makeshift backline he did OK. No one came out of the second goal Barca conceded looking good.

DF Jordi Alba, 6 — Roasted for pace by Emerson Royal for Betis’ first goal. Up the other end, he came into the game once Messi came on and helped set up the second Barca goal.

MF Sergio Busquets, 6 — Struggled when the game opened up and gave away the free kick which Ruiz scored from.

MF Miralem Pjanic, 5 — Looked awkward in front of Busquets and also appeared to be lacking confidence.

MF Riqui Puig, 6 — Sloppy with the ball early on but did improve before coming off in the second half. Despite that, felt like a missed opportunity on a rare start.

FW Ousmane Dembele, 7 — Barca’s most exciting player in the first half. Always a threat when carrying the ball and taking players on but he missed a great chance in the second half after being freed by Griezmann.

FW Antoine Griezmann, 6 — Didn’t do enough in the first half but like Barca as a team, improved once Messi came on. Fluffed his best chance so must have been relieved to see it end up in the net regardless via Betis defender Ruiz.

FW Martin Braithwaite, 5 — Asked to play wide left and struggled to have any impact before coming off at half-time.

DF Frenkie de Jong, 6 — Poorly positioned for the Betis opener but was playing out of position. As expected, was better when he moved into midfield late on.

MF Pedri, 7 — Defends from the front in a way that few others can. Vital to Barca’s second-half performance.

FW Lionel Messi, 8 — Changed the game instantly, scoring his 13th league goal of the season off the inside of the post. Played a brilliant pass to Alba in the build-up to the second goal.

FW Francisco Trinaco, 7 — He’s waited a long time for his first Barca goal since signing from Braga for €30 million in the summer. It was worth it.

DF Samuel Umtiti, N/R — Came on for Busquets at 2-2 to add stability to Barca’s defence.