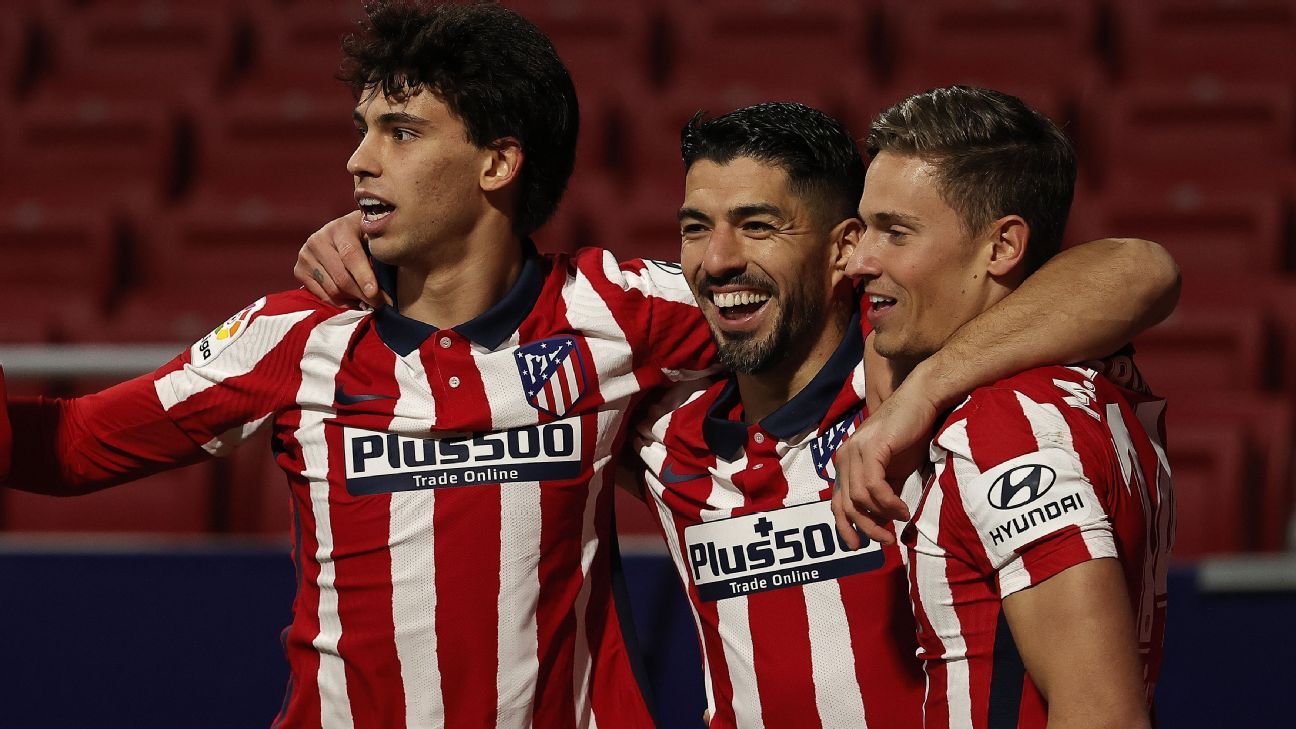 Since Atletico Madrid last won the Spanish title in 2014, the average number of points needed to win La Liga has been 86. Even if Monday night’s 2-2 draw at home to Celta Vigo was disappointing, especially conceding such a late equaliser, it’s a very good bet that with 51 points in the bag Atleti are, at most, 12 wins away from what would be only their third Spanish title win in 44 years. Heady times.

In fact, if you take into account Atleti have games in hand on Barcelona, Real Madrid and Sevilla FC, perhaps it’s as few as eight or nine wins which will give Diego Simeone and his band of brothers that golden champion feeling.

But hold on a minute. The fixture list has obstacles for Los Rojiblancos. The champions-elect must try to win away in some of Spain’s most testing places — at Sevilla, at Villarreal, at Athletic Bilbao, at Barcelona, at Levante and at Real Betis.

The “Amen Corner” of Atleti’s title charge, if I may call it that in honour of them trying to “Master” Spain, runs like this: away to Granada, away to Levante, at home to Levante four days later, away to Villarreal, at home to Madrid, at home to Athletic, away to Getafe, at home to Alaves, away to Sevilla and then away to Betis.

In the midst of all that there are Champions League tests against a tougher, revived Chelsea under new manager Thomas Tuchel.

You emerge from that bruising run without too many “bogey” matches, without a bloody nose, points sliding out of your grasp, without injuries, suspensions or a loss of morale and, frankly, you’re nearly on top of the podium.

Whether Atleti achieve it or not isn’t simply about the marvellous squad they’ve assembled, about their points advantage or the fact that Spain’s “Big Two”(Madrid and Barca) are in deep upheaval.

It’s less evident than their playing attributes but Simeone has a strong central core of gnarled, battle-scarred footballers who’ve been disrespected, discarded, pushed around, insulted, felt fear for their lives — but who, to a man, have reacted.

This isn’t quite the “Dirty Dozen” — a specially assembled squad of streetwise misfits who’ll break all the rules, nick your medals if you drop your guard but fulfil the mission because they’ve nothing left to lose but self respect.

But it is a squad full of those who’ve fed off the survival instinct, who are fired by an aggression and determination which should see them through the bumps, bad luck and wobbly moments of an intense title run-in.

Simeone is a good starting example. Top general, massive salary, the most successful coach in Atleti’s entire history — but haunted.

Their Champions League final defeats, particularly the acid burn of losing to Madrid twice, each time in the most horrible circumstances of either conceding a last-minute equaliser (2014 in Lisbon) or Juanfran’s crucial penalty clipping the post and bouncing wide (2016 in Milan), absolutely haunt him. He’s admitted, perhaps not wisely, that the infamous Champions League anthem, which gives so many football people goosebumps and fills them with ambition, ‘”makes me feel pure pain every time I hear it.”

His first lieutenant in this “Dirty Dozen” metaphor is, of course, Luis “El Pistolero” Suarez.

All his life he’s had to fight. Fight to work his way up the football ladder, fight to win recognition, fight to win the sport’s big prizes and, above all, fight to restore people’s respect and admiration after the various controversial episodes which, temporarily, have made him a pariah figure. Every damn time he’s fought back and moved up.

Then, at Barcelona, he not only establishes himself as the best striker partner Lionel Messi has ever enjoyed but he proves that he’s one of the most technical, smartest centre-forwards of the modern era.

Picked upon, booted out the door and shown zero respect, never mind affection or gratitude. Just the other day he used Spanish radio to confirm: “It was brutal the way that I was disrespected by FC Barcelona. I wanted my kids to see me leaving with dignity and honour. The proper way. When the moment came to tell the kids what they were doing to me it was very hard.

“Maybe I could have insisted on staying, taken my salary and done my best in the circumstances but I knew that at the first hint of difficulties I’d come under attack. For my own pride and self respect, given how they were treating me, I needed to move.”

Pablo Escobar was the world’s richest, most powerful drug kingpin. Andres Escobar was the biggest soccer star in Colombia. The two were not related, but their fates were inextricably — and fatally — intertwined. Stream on ESPN+ (U.S. only).

You think he’s putting all that anger, all that competitive rage into his season at Atleti? Damn tootin’ he is — 16 goals, two assists, leader of the Pichichi scoring charts and both Barcelona and Madrid looking at his heels at the top of the division. Burn baby burn. It’s a Suarez inferno.

These narratives count in the deep midwinter of a title challenge. Who’s driven more by the scent of silverware than salary? Who’s got something to prove or experiences which are psychological scars — events to tell you never to be intimidated or tentative again?

Strangely enough, Jan Oblak’s in that group. He’s had something to prove since almost the very beginning at Atleti. Signed to replace the outgoing Thibaut Courtois in the summer after the 2014 title season and a Champions League final loss, the Slovenia international had been Benfica‘s No. 1 as they won the domestic Treble.

Moving to Atleti for €14 million, Oblak was suddenly relegated to second choice behind Miguel Angel Moya and, out of the blue, had to confront the idea that Atleti had immediately lost all faith in him and wanted to send him back to Portugal.

Benfica president Luis Filipe Vieira told the club’s TV station that: “I never thought that Oblak would be returning here but the world’s a weird place and Atleti have offered him back to us… we said ‘no’ of course.”

Whether it was true, whether there was some mischief making… whatever. Oblak, in a new, strange, demanding environment, was hit with doubt and disrespect.

It’s an experience which either makes or breaks you. From that day to this, where many would argue he’s the best keeper in the world, has been quite a journey — still fuelled by the ‘I’ll show everyone!’ mentality.

The list goes on — many, perhaps most, of Simeone’s disciples have steel about them, forged by experiences which have no relationship to their talent, their wealth, their exalted status.

Take Saul, for example. He was a Real Madrid starlet — they call them “Mirlos” (after birds who are usually dark or mottled in colour but who, when they have white plumage, are exceptional). For whatever reason his talents weren’t appreciated and he’s often explained how he was bullied — by fellow players but, in his view, by those who were central to the structure of the youth Academy. After having his boots and his snacks “stolen” the worst came when an offensive letter was sent to one of the coaches — purporting to be from Saul when, categorically, it wasn’t. He quit. Atleti came calling, he loved the idea and… here we are.

He’s won five trophies with Atleti and played in three youth-level European finals for Spain. Don’t for a second think that being mistreated and picked upon hasn’t fired him up to be the man, the winner, he is. The names and the similar character traits just keep coming. Simeone’s fighters.

Kieran Trippier is another good example. Beaten in his, now, home stadium for Tottenham Hotspur in a Champions League final where they never got going against Liverpool, he left the Metropolitano that night willing enough to speak to reporters. He castigated himself for poor form, a poor season and swore that he’d be ferocious in pressing a “restart” button. Weeks later he’d secured a move to Atleti, was diligently learning Spanish at a rate which would have scared the daylights out of Gareth Bale and he established himself as an essential part of Simeone’s attacking wide-defender system. An Englishman abroad — but one fuelled by an iron desire to replace bitter memories with sweet, silverware alternatives.

Koke? Held up at gunpoint a couple of years ago so that the thugs could rob his expensive watch. Shrugged it off. Barely an impact. He hated, though, the fact that last season some of the most loyal Atleti fans and media were speculating about his form, his worth to the team and his motivation. Especially at a time when he’d been dropped by Spain’s national team since the disastrous 2018 World Cup in Russia. Response? A special season this term; driven, important, responsible. Leading the team he’s always supported and adored, he was restored to La Roja starting XI by Luis Enrique just in time to be one of the standout players when Spain thrashed Germany 6-0.

Made of the right stuff, Koke — like Simeone, Suarez, Trippier, Oblak, Saul, and Angel Correa, who could only arrive and play for Atleti after a six-month recuperation following heart surgery in 2014 at the age of 19.

Joao Felix — rejected by Porto as a kid for being “too slight” is Atleti’s record signing. He is awfully glad he fought through the temptation to quit football altogether in disgust at his treatment at Os Dragões. Marcos Llorente, misused and then discarded by Zinedine Zidane at the club he loved, where his father, great uncle and grandfather all starred — proving those at the Bernabeu wrong with every run, assist and goal. Yannick Carrasco, who so powerfully regretted moving to play for Dalian in China that he moved back to Atleti, delighted to knuckle down and follow Simeone’s rules to apply the best he can.

The theme is that they all have scars. They’ve all been in battles, won and used the experiences. There’s still a long road from here to the winners tape — but please don’t doubt the motivation, character or hardiness of Simeone and his band of brigand brothers.

Let’s not write off Haaland after one glorified friendly
Prem players to stop taking a knee before games
Conte cites Man Utd as warning to Spurs ambition
Arteta hints at more signings after opening win
U.S.’s McKennie out of season opener with injury