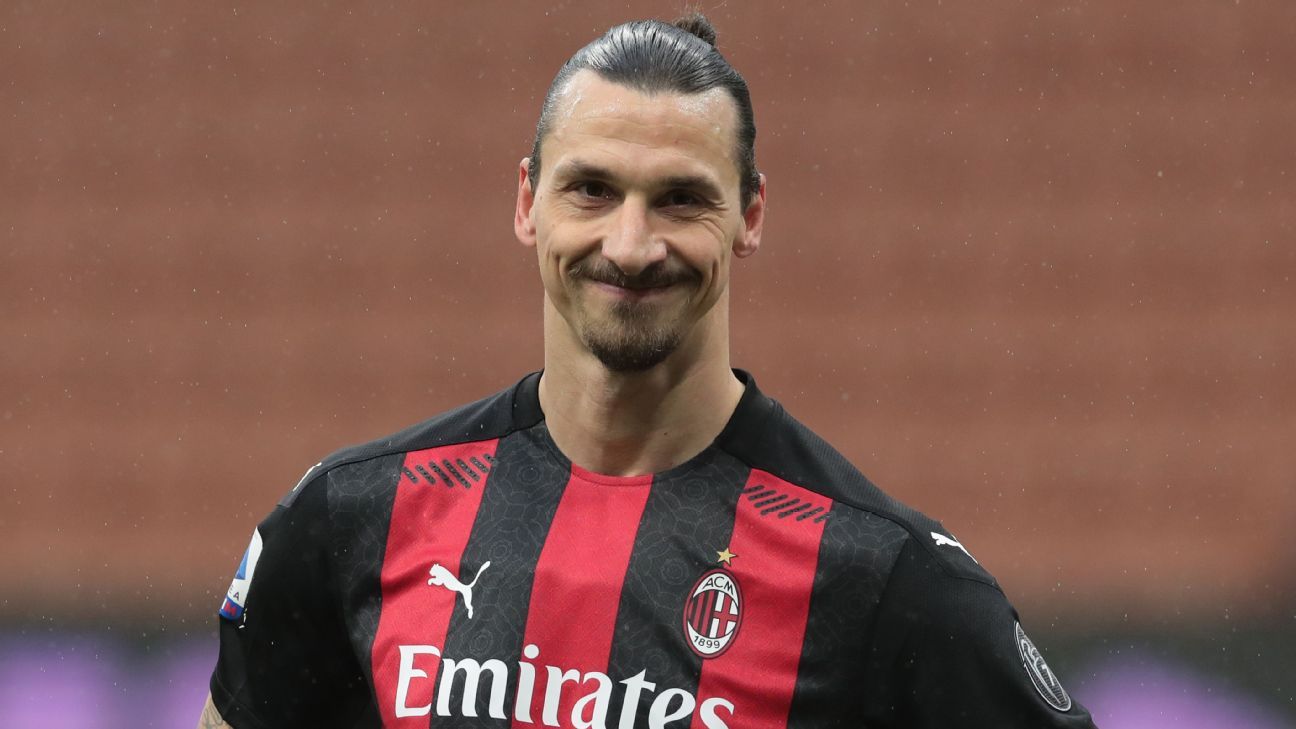 Serie A’s top scorer, with 16 goals, is Cristiano Ronaldo, who turned 36 last week. Just behind him, you’ll find a trio of players on 14: Romelu Lukaku, 27 years old, is the baby of the three, Ciro Immobile is 30 and Zlatan Ibrahimovic is a venerable 39 years old.

Ordinarily, this is when you’d cue up jokes about Serie A as a retirement league, a place where aging poachers keep banging in goals, aided by the supposedly slower tempo and the equally geriatric defenders. It’s a stereotype — and a lazy one at that — but it’s based on the fact that in the past decade the league’s scoring charts have been topped by a 33-year-old Antonio Di Natale, a 38-year-old Luca Toni, a 31-year-old Edin Dzeko and a 36-year-old Fabio Quagliarella. But look around the scoring charts in Europe’s top leagues and you may notice something unusual.

– Is Ronaldo the all-time scorer? Pele? Bican? We may never know

The top goalscorer in La Liga, Atletico Madrid’s Luis Suarez, is 34 and the guy right behind him, Lionel Messi, is 33, just like the guys who are fifth and sixth in the scoring charts: Karim Benzema and Jose Luis “El Comandante” Morales. (Sitting in eighth is another 33-year-old, Iago Aspas.) In the Bundesliga, 32-year-old Robert Lewandowski leads the way and in the top 10, you’ll find 31-year-old Thomas Muller and 32-year-old Lars Stindl.

The Premier League, of course, is a bit more youth-oriented, though if last year’s top scorer, 34-year-old Jamie Vardy, hadn’t been limited to 16 starts this campaign, he might be challenging league leader Mohamed Salah, 28, who has five more goals than he does.

Compare this year’s scoring charts in England, Spain, Germany and Italy to those 20 years ago, and you’ll count 14 over-30s in the top 10 today compared to eight the 2000-01 campaign. (And, actually, the number of 30-year-olds in the top 10 in Italy has declined, from five to three.) Older players are scoring more often, and there are a number of fairly evident reasons behind this trend.

The first is pretty evident. Advances in medicine and sports science have prolonged players’ careers. It’s not just Ronaldo, with his 142 reps in 45 seconds, or chilling (literally) at -200 degrees centigrade (-328 degrees Fahrenheit) in the cryogenic chamber he keeps at home, plenty of rank-and-file footballers take better care of themselves. And just as important, advances in surgical procedures and medical techniques mean that injuries that were once debilitating, if not career-ending, can sometimes leave players even stronger than before.

Another factor skewing the numbers is the presence of Ronaldo, Messi and — a rung or two below them — players like Suarez, Lewandowski and Ibrahimovic. The first two are G.O.A.T. candidates, blessed with so much ability (and the workrate and professionalism to squeeze the most out of it) that it’s not a surprise they are going strong well into their 30s. Lewandowski is the third leading goalscorer in Bundesliga history (and he’ll likely be second come the end of the season), Suarez is the only player not named Cristiano or Lionel to have scored 40 goals in a single season in the past 20 years in a top-four league and, well, Zlatan is Zlatan. He broke the 500th goal in club football last weekend. He’s comfortably in the top among those who played in the last half-century, alongside Messi, Ronaldo, Pele, Romario and Gerd Muller.

We often note how lucky we are that Messi and Ronaldo are contemporaries, but it’s equally true that there haven’t been many periods in history that have featured so many bonafide scorers of the same generation.

There are probably two other factors at work here and they’re related.

One traces its roots to the Bosman rule, the court judgement in 1995 that made it illegal for teams in the European Union to place limits on the number of foreign players they could field or sign. Maradona, for example, had to play with at least eight Italian players during his heyday at Napoli. Inevitably, his supporting cast wasn’t going to be as talented or as tailor-made as it might have been if the club could have signed whoever they liked to round out the team. Couple this with the effects of polarisation we’ve seen over the past two decades — the gap between the handful of super-clubs that can outspend everybody and the rest has increased like never before — and the current generation of scorers has benefited like no other.

Simply put, the teams they play for are stacked to a degree rarely seen in history: they win more and score more, which translates into better numbers for the forwards.

There are other factors tied to this, which are more tactical in nature. If many teams played with two central strikers in the past, today most have a single offensive terminus, which naturally results in more opportunities. Furthermore, many of the players mentioned above are largely spared from defensive duties off the ball, whether it be pressing or tracking back.

(Not everyone, though. Benzema and Lewandowski in particular maintain a high work-rate when not in possession — and it’ll be interesting to see to what degree this continues as they approach their mid-30s — a year or two worth of extra mileage can make a big difference.) Then again, most play for top sides who have the bulk of the possession anyway and therefore, there’s less to do in terms of running around and defending, not to mention the fact that you spend most of your time closer to the opposing goal.

Longevity manifests itself in other positions too, though, apart from goalkeeper, it’s not quite as prevalent. They’re not goalscorers, so we can’t necessarily measure their contribution as easily in terms of numbers, but there are plenty of notable players in their mid-30s contributing regularly at the highest level.

In Spain, Nino, at 40, has made 12 appearances for Elche up front this season, while Granada’s Jorge Molina has nine goals in all competitions at age 38. Luka Modric (35) continues to run Real Madrid’s midfield, while the irrepressible Joaquin, at 39, has made 18 appearances on the wing for Real Betis (and become the first Spanish player to score a Liga goal in four different decades).

Serie A has 39-year-old Bruno Alves leading the back four for Parma while, just up the road, another 39-year-old, Rodrigo Palacio, is a regular at Bologna. Goran Pandev scored twice for Genoa last week at age 37, while Franck Ribery, also 37, is out wide for Fiorentina. Eintracht Frankfurt had risen to fourth in the Bundesliga with 37-year-old Makoto Hasebe anchoring the midfield and 34-year-old David Abraham (who has since moved on) at the back. Oscar Wendt (34) is a starter for Borussia Moenchengladbach and Petr Pekarik (34) a fixture for Hertha.

The Premier League also skews younger, but in addition to Vardy, Thiago Silva, at 36, is a regular for Chelsea, while Joao Moutinho (34) is a fixture in Wolves’ midfield and James Milner (35) has made 23 appearances in all competitions for Liverpool. And, of course, just two weeks ago, 38-year-old Phil Jagielka played all 90 minutes for Sheffield United as they beat Manchester United at Old Trafford. But the granddaddy of them all, the man who shows us that age is indeed just a number, plays in France, for Montpellier.

Vitorino Hilton is a 43-year-old central defender and still going strong. He has made 17 appearances — 13 of them from the start — this campaign, and it probably would have been more if not for the fact that he was sent off twice and had to serve subsequent three-game bans. (It’s not clear how many crunches he can do in 45 seconds or whether he dips into the old cryogenic chamber after training.)

The days when clubs like Arsenal only gave one-year extensions to players the wrong side of 30 are gone — witness the three-year deals they gave Pierre-Emerick Aubameyang (31) and Willian (32) last summer. With good genes, a lot of hard work and professionalism and a bit of luck, you can continue being productive into your mid-30s. You don’t even need to be Zlatan or Cristiano to do it, though it helps…