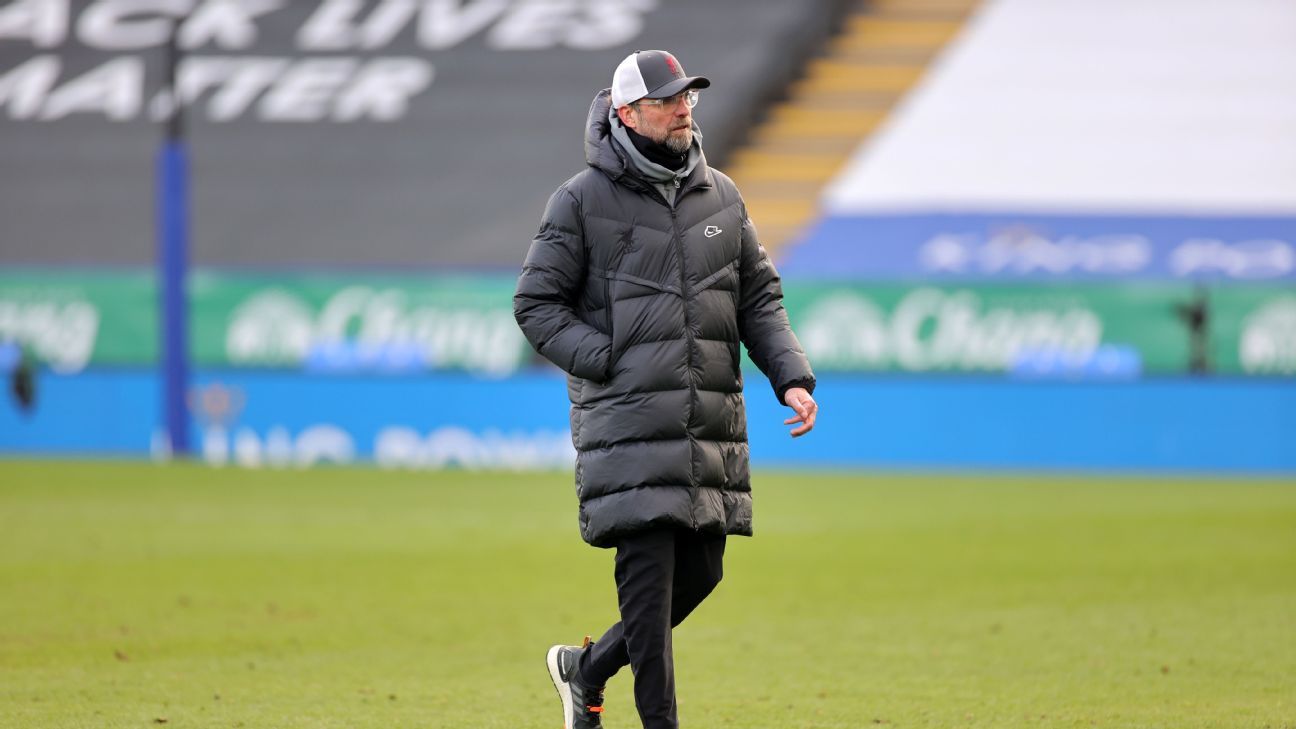 Liverpool boss Jurgen Klopp has hit back at rumours suggesting he could walk away from the club and said he is ready for the challenge to turn things around.

Klopp conceded the 2019-20 Premier League champions were out of the title race this season after they suffered a 3-1 defeat at Leicester City on Saturday.

Liverpool have lost three consecutive league matches and sit 13 points behind leaders Manchester City, who have a game in hand.

There were reports that Klopp could leave the club but he was defiant at his news conference ahead of Liverpool’s Champions League clash against RB Leipzig and said his team are prepared to respond to their critics.

“Did I get the sack or did I leave by myself? Neither,” he said. “I don’t need a break. Privately, we had a tough time, that was a much longer time already and we always deal with it as a family 100%.

“I am 53 — I have worked in football for a long time and I can switch off. I don’t carry things around. Nobody has to worry about me.

“At the moment, a lot of people are not happy with the results. I get that, but I am responsible for that. It’s a massive challenge. I’m ready, the boys are ready, and we will give our absolute everything to sort it.”

After the Champions League tie, Liverpool face Everton in the Merseyside derby at Anfield on Saturday as they seek to remain in the top four places.

Following the defeat at Leicester, Liverpool fans unveiled a banner at the club’s stadium giving their support to Klopp and he said he was pleased to receive their backing.

“The majority of our people are still — and even more — so with us. I would prefer to fight this fight with our people in the stadium.”

Klopp also confirmed that Naby Keita will miss out on the chance to face his former side on Tuesday due to an injury.

“The manager is really good in situations like this,” he told a news conference. “In adversity the manager is the one we listen to the most. He is always there for us as players. He tries to protect us as much as possible.

“But deep down we know as players we take full responsibility and it’s down to us to go out on the pitch and change this tough period that we are going through.

“I don’t think I even need to comment on something like that [Klopp exit talk]. Someone is sitting behind a keyboard making rumours up about the manager and players in the dressing room. It’s not true.”

Henderson backed teammate Thiago after his tough start to life at the club. The Spain international suffered an injury in October during the Merseyside derby and has failed to score or assist a goal since his move from Bayern Munich.

“He has been brilliant since he has come to the club,” he added. “Everybody knows how good he is and he is a world-class player. He leads by example and we learn a lot from it. He knows Leipzig more than anyone so he can help us over the next 24 hours.”

Benzema hints Real don’t need another No. 9
Arteta: I hope Chelsea welcome Auba if he joins
Giggs arrives at court to stand trial for assault
Life without Lewandowski: How Bayern’s attack is evolving
Man United suffer 4-0 thrashing at Brentford