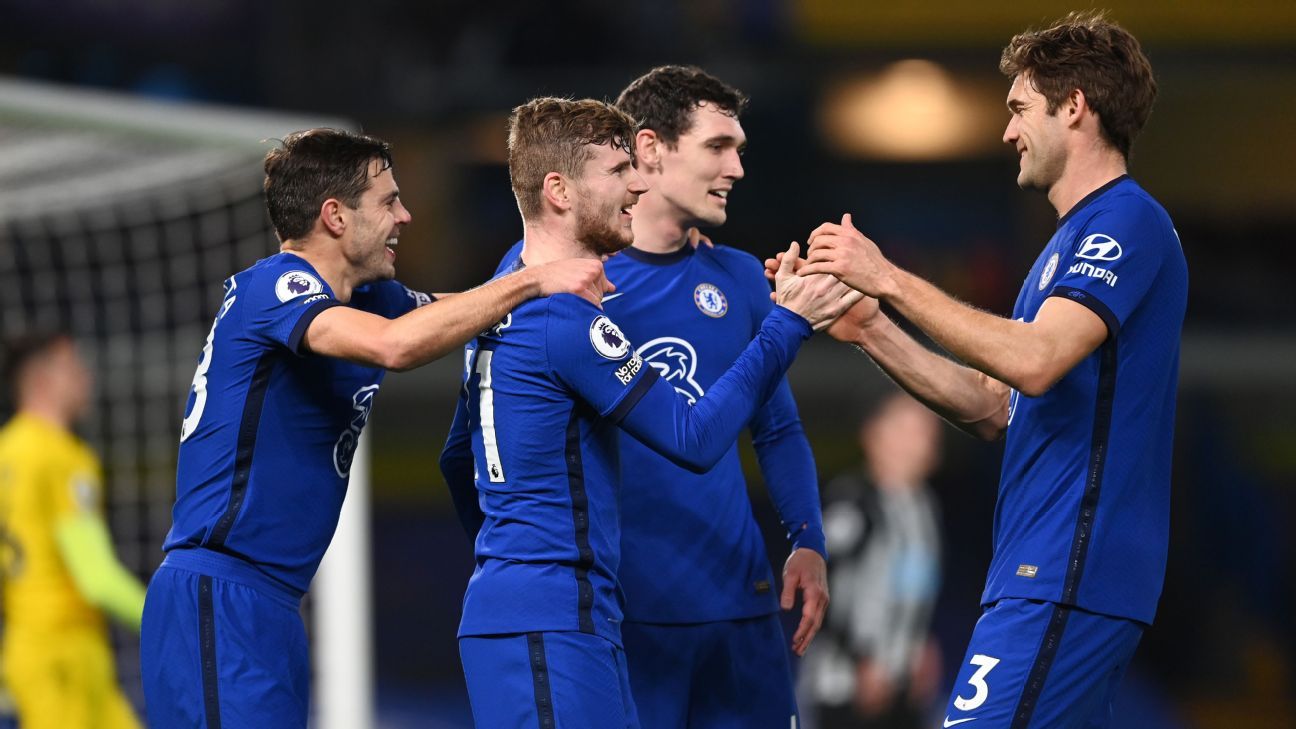 LONDON — Chelsea‘s 2-0 win over Newcastle United was comfortable, but this was a night when droughts were broken and confidence restored. Timo Werner was superb, while Kepa Arrizabalaga repaid Thomas Tuchel’s faith in his first Premier League start since October.

While Newcastle offered little in attack, this was a near-perfect night for Chelsea. The only blot on the copybook was the first-half injury to Tammy Abraham, but it was his replacement Olivier Giroud who scored their opener, with Werner grabbing their second. It’s now six games unbeaten for Tuchel, and, crucially, the strikers have started scoring — their first in the league under the new boss.

Having waited 13 matches for a Premier League game, the final seconds of the goal drought were perhaps Werner’s most nerve-wracking.

Chelsea were already 1-0 to the good at this stage, following Giroud’s opener — which Werner played a key role in teeing up as he bamboozled Emil Krafth to hammer the ball across goal, where from the resulting scramble allowed Giroud a comfortable close-range finish — and had just earned a corner. Werner found himself at the far post as the delivery came in and having somehow found its way to him unmarked, he slipped and slid but managed to steer the ball over the line, despite Karl Darlow’s best efforts to claw it back out.

Then came the VAR check to check if the ball hit Giroud’s hand en route to Werner. As he waited for the decision, he told his teammates in the dugout that it would be just his luck to have his strike ruled out. Mercifully for the Germany international, the call came back in Chelsea’s favour. Werner — complete with bleeding lip from an earlier bang to the face — gave a brief glance to the heavens, and then exhaled.

It marked the end of his run without a top flight-goal. It just so happened the goal came in the 1000th minute of this drought — his worst league scoreless spell since he was back at VfB Stuttgart in the 2014-15 season. Six seasons on and it was his goal-scoring record at RB Leipzig that prompted Chelsea to spend £45 million to bring him over from the Bundesliga. Having scored 34 in 45 matches for Leipzig last term, his return of four in 23 league games this season for Chelsea is still far lower than he’d expect.

But this lack of finished product was not for want of trying. Werner has at times cut a frustrated and disconsolate figure at Chelsea. He runs himself into the ground, always hovering in the half-spaces, looking to play off the defenders’ shoulders and cutting in off the flank. He’s tried that at Chelsea, but under Frank Lampard it just didn’t quite click for him. Under Tuchel he’s shown green shoots of recovery with his two assists against Sheffield United on Feb. 7, and this scrambled effort will feel like a massive weight has been lifted off his shoulders.

“I was happy I scored, finally,” Werner said after the match. “A still long way to go in the rest of the season. As a striker, you always want to score.”

This was straightforward for Chelsea, and their much-maligned goalkeeper Kepa. The world’s most expensive keeper was handed his first Premier League start since Oct. 17, when he conceded three against Southampton. Since then he saw Edouard Mendy take his spot, with his match action restricted to cup competition. But after Kepa’s impressive showing against Barnsley last week in the FA Cup, Tuchel continued his policy of giving players a second chance to impress and the Spain international repaid the faith. But Mendy remains Chelsea’s No. 1, as Tuchel said post-match.

Kepa’s going to need some renaissance to quieten the doubters over his long-term future in west London, but just as Tuchel did with Marcos Alonso, Jorginho and Antonio Rudiger, he’s drawn a line in the sand from Lampard’s tenure, and allowed the squad to prove to him they are worthy of being part of his long-term plans. Kepa did what was required and made smart saves from a Jonjo Shelvey free kick and a glancing header from Joe Willock, but it remains to be seen whether this was the start of his rebirth or a chance for him to impress in the shop window.

While Newcastle were disjointed and lacked cohesion, Chelsea are continuing to build under Tuchel and we are starting to see early signs of how they’ll look in the long term. Mateo Kovacic is the heartbeat of the side, and dictates the tempo from the middle of the park. His long, ranging balls or short, neat passes are more often than not the catalyst for the team’s transitional play. Alonso has nailed down the first-choice left-wing-back spot, with Callum Hudson-Odoi on the right. Mason Mount was dangerous again — and should’ve grabbed Chelsea’s third in the first half only to shoot wide — while the defence is looking settled.

It remains to be seen, however, who Tuchel’s first-choice striker will be, or how exactly Hakim Ziyech or Christian Pulisic fit in. Pulisic was an unused substitute — Reece James was brought on for Hudson-Odoi late on — and has managed just 84 minutes out of a possible 450 in the league under his new manager. He still has work to do to recapture the form we saw late on last season.

“Well today the first change was already made in the first half from injury and Christian was a tight decision on whether he starts again after the cup game, or if he comes from the bench and another 11 starts,” Tuchel said. “It makes it difficult as the third change, you don’t want to use that too early so we did what we always do the middle of the match we only think about what can help you win the match. Christian absolutely deserved to start, he deserved to come in, so I hope he keeps on going and I’m absolutely sure he will be an important influence for us and make an important impact for us in the future.”

Rebuilding Werner’s confidence was one of the items towards the top of Tuchel’s to-do list when he took over Chelsea in late January.

The £45m signing from RB Leipzig had not wanted for lack of effort, but it was the finishing product lacking from Werner’s output. But on this chilly night in west London, he put in a performance worthy of his reputation and promise as he kept Newcastle’s defenders spinning and finally got the goal he’d worked so hard for.

“Timo was decisive for us today,” Tuchel said.