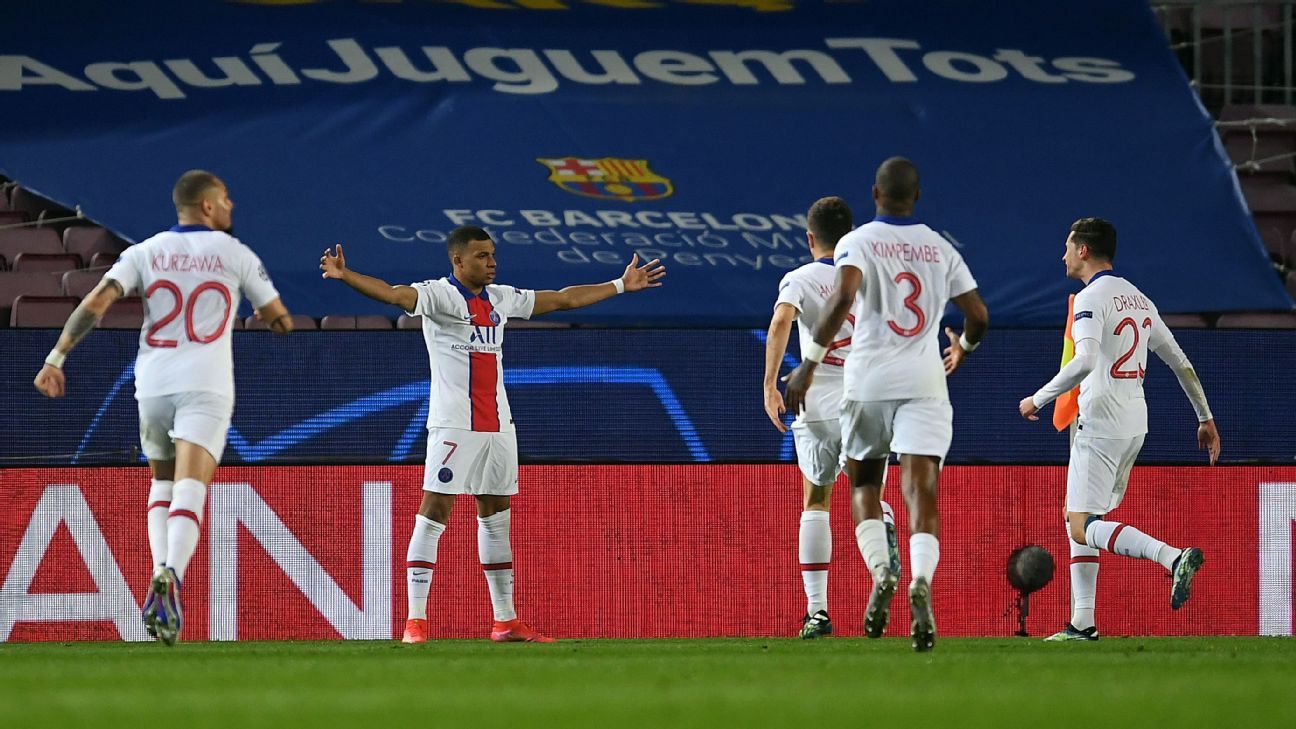 On Monday night, Kylian Mbappe got to step onto the Camp Nou pitch for the first time. He’d never been there before; not only had he never played in this famous ground, but he’d never been as a spectator either. He found it beautiful and didn’t feel an ounce of fear or anxiety about playing Barcelona on Tuesday night.

You would have forgiven him if he did, though: PSG were without Neymar and Angel Di Maria for the Champions League last-16 first leg, and had turned in a string of average performances before the clash with Lionel Messi & Co. away from home.

PSG didn’t arrive in Catalonia full of confidence and momentum. During Monday’s training session, the French prodigy had a chat with Mauricio Pochettino. “How many times have you won here, boss?” he asked him. “Only once, when I was at Espanyol,” the manager responded. “There will be a second time tomorrow,” he then told the Argentine coach, with a smile.

Mbappe relished the challenge. His first game at the Camp Nou, his first game against Barcelona, his first club game against Messi (having played him when France met Argentina in the 2018 World Cup) and his first game in the Champions League without Neymar and Di Maria all on one night. He was on a mission, though Pochettino didn’t want him too excited or nervous about the prospect. In the discussion they had prior to the game, the PSG manager made sure Mbappe didn’t think or feel that he had to win it on his own; he didn’t want his star to try too hard to do it all by himself.

Paris had to be a team to win in Barcelona and to win big. Marquinhos said after the 4-1 win that “football is a team sport. But when a team is strong, it is the individuals that shine.” This was PSG’s motto on Tuesday. Only with a strong collective could the likes of Mbappe, Marco Verratti or Marquinhos shine. And shine they did.

Mbappe was magnificent. At 22, his hat-trick, making him the first away player to score three at the Camp Nou in a Champions League game since Andriy Shevchenko in 1997 with Dynamo Kiev, is a reminder of what an incredible talent he is. But it was also a confirmation that he can own a big game like this and carry this team if needed. At a time when Mbappe is still openly undecided about his future, such a win can only be good from a PSG point of view to convince him to stay.

Seeing PSG play under Pochettino since his arrival on Jan. 2 had been more disappointing than anything else. Yet Tuesday was the night to put things right, both for the new coach and for his team. Despite the difficulties, despite the absences and despite Messi lining up opposite them.

Pochettino had a meticulous plan for Barca, and his players executed it perfectly. The goal was to play balls for Mbappe and Moise Kean, whom Pochettino preferred to Pablo Sarabia with great effect, into the half-spaces around Mauro Icardi and force the Barcelona full-backs, Jordi Alba and Sergino Dest, to follow them in-field, which in turn left PSG full-backs, Alessandro Florenzi and Layvin Kurzawa, free to support in attack. Both of them were key on the first and third goal after great passes from Marquinhos and Paredes.

Verratti occupied a more central role, higher up and between the lines in possession, but also very efficient defensively on the left to take away almost all defensive responsibilities for Mbappe.

Defensively, Paris were perfect, too. Kean and Florenzi blocked Alba from getting forward on his flank, while Icardi did a great individual job on Sergio Busquets to prevent him from having some influence on the game. Collectively, PSG also stopped Messi and Pedri from continuing their productive relationship, restricting the duo to just five passes between them. It all worked so well. Seeing the performance levels of Paredes and Icardi, Pochettino’s Argentine compatriots, also shows the work the PSG boss has done to lift his players.

It’s true that Barcelona were poor on Tuesday night, but it is because PSG were so good. Barca’s struggles are why no-one inside the club, nor among the players, is willing to devalue the win. The Spanish side are not what they used to be, but no opponent has beaten them so easily and convincingly this season. No one has scored four goals against them this season until Tuesday night — not Real Madrid, nor Atletico Madrid, Sevilla or Juventus. (Though it must be said Juve’s 3-0 win in the group stage, with two penalties, was impressive and meant they finished top of their group and the Catalans second, which got them the PSG draw. Barca had beaten Juve 2-0 earlier this season in Turin, too.)

Craig Burley says the grass may not be greener at another club should Lionel Messi leave Barca this summer.

Obviously, this is a significant victory for Pochettino and PSG. As a new manager in charge only for six weeks, it’s so important to get big wins and big performances straight away, building momentum for the team and getting vindication for the coach’s direction. Even if, until Tuesday, the team’s level of play had not been great, they’d beat Marseille twice under the Argentine already and now, they have a statement win in Europe. While Thomas Tuchel is doing well in his first weeks at Chelsea and the pressure was huge on Pochettino before Tuesday night, the former Spurs boss will enjoy this. It even means a little more to him given his days playing for and coaching Espanyol.

There is still a second leg to be played, of course, and hopefully, Di Maria and Neymar will be back for the game in Paris on March 10. The difference with before is that everyone in the dressing room after the first leg was already focused on the return fixture. They know the job is not done, and the ghosts of the Remontada in 2017 are still there. The scar is still visible. Only if they knock Messi and Barca out in style next month will the nightmare of four years ago go away.

In the dressing room on Tuesday night, there was no extra jubilation. Mbappe, sat next to Sarabia, had the match ball and the man of the match trophy by his side. Every PSG player signed the ball, and it will surely be centre stage in Mbappe’s trophy room at home in Paris. Paredes and Icardi, next to each other, enjoying their mate. Happiness was everywhere, but nothing was over the top.

As great as Tuesday night at the Camp Nou was, they are still not through to the quarterfinals and are still only second in Ligue 1. There is plenty more work to do still this season.