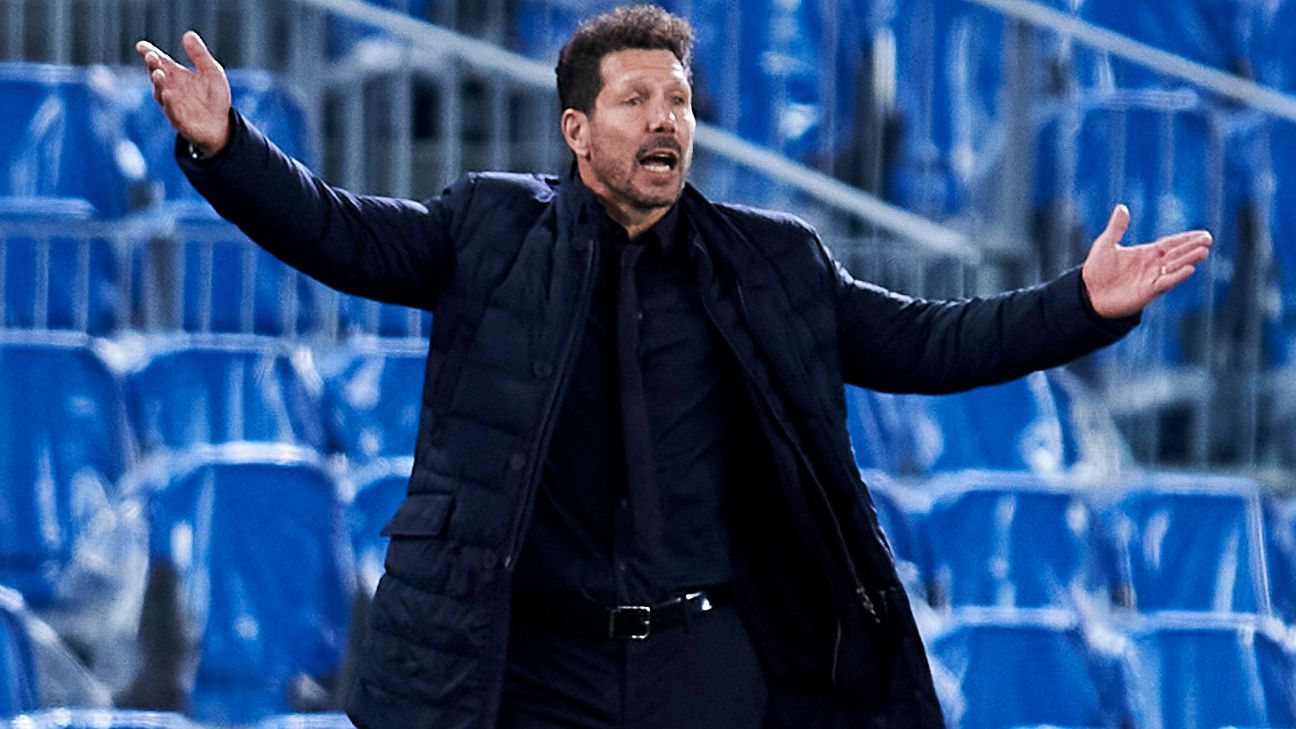 Even in the week leading up to a crucially important, and potentially career-defining, Madrid derby, with his team top of La Liga as they have been virtually all season, there are lessons for Atletico manager Diego Simeone to learn from former Arsenal boss Arsene Wenger. There’s a lesson to avoid becoming “satisfied” and not being scared to reach for the biggest objectives. A lesson about not settling for “safe” instead of daring to dream. And a lesson about not letting financial success, and its associated personal rewards, blunt the “who dares wins” attitude without which true glory would be perpetually elusive.

If you set aside England‘s season-opening friendly of the Charity/Community Shield, Wenger won 10 major trophies in 22 years at Arsenal. In Simeone’s nine full years in charge at Atleti, the Argentine has inspired Los Rojiblancos to seven — including three in Europe — arguably the best spell in the club’s history.

Simeone is already the coach with the most trophy wins in Atleti’s 118-year existence and now, as he and his troops chase a first league title since 2013-14, they have to go toe-to-toe with their nemesis, Real Madrid, yet again.

It’s a derby that offers Atleti a golden chance to go eight points clear at the top of La Liga, with a game in hand and 13 games left. A massive opportunity, right? The kind of challenge which makes the blood in your veins surge with endorphins; the “fight” instinct warns its “flight” sibling to leave town as the warrior mentality takes over. Or is it “squeaky bum time,” to borrow legendary Manchester United manager Sir Alex Ferguson’s infamous phrase? Is it the kind of threat/opportunity scenario which, these days, makes Simeone come over all conservative, risk-averse and fearful?

The fact is that Atleti, in recent seasons, have shrunk in the face of these tests — they haven’t been made of what NASA calls “the right stuff.” It’s beginning to feel as if they, and Simeone, may be suffering a Wenger-isation.

It’s been five years since Atleti beat Madrid in La Liga; six years since they beat them at home. Horrible stats. Granted, Los Colchoneros beat Barcelona 1-0 earlier this season, but even that was badly overdue – it was Simeone’s first win in 18 Liga matches against the Catalans, a spell spanning the reigns of eight different Barca managers! Another horrible stat.

But with the notable exceptions of a thrilling 4-2 win over Madrid in the 2018 European Super Cup final and the winning of the Europa League a few months earlier, Atleti’s inability to produce big performances in big matches since losing the 2016 Champions League final is beginning to make them look like a team that fluffs its lines.

Is it because of their manager? Simeone’s ex-international teammate, PSG boss Mauricio Pochettino, told me recently that he yearns for his players to be “wolves, not domesticated pet dogs.” Has Simeone, like Wenger, gone a bit tame?

In 2017, Atleti lost the Champions League semifinal first leg against Madrid 3-0. The tie was effectively over and the final out of reach after just 90 minutes and even a 2-1 win in the reverse fixture couldn’t save them.

A year later, there was a brilliant 3-0 win over Marseille in the Europa League final, but it was an opportunity that only fell their way because they originally lost at home to Chelsea and dropped four points against lowly Azerbaijani side Qarabag to flop to third-place in Champions League Group C.

In 2019, Simeone’s team were thrashed 4-0 at Signal Iduna Park by Borussia Dortmund meaning the two teams tied at the top of Group A, but Atleti lost the head-to-head record and drew Juventus in the round of 16 as a result of coming second. Winning 2-0 in the first leg, they went to Turin and were utterly smashed 3-0 to crash out – a deeply inglorious result from a team whose trademark has always been their unerring ability to defend a single-goal lead and win 1-0.

Last season, amid the enforced changes of the coronavirus pandemic, they were second-best against Liverpool over two legs in the round of 16 but thanks to a blunder by the Reds’ stand-in keeper Adrian and a late matchwinning cameo by substitute Marcos Llorente, who scored two goals in extra-time, they went through 4-2 on aggregate. However, they then suffered a meek 2-1 defeat against RB Leipzig in the quarterfinals as Tyler Adams scored late on.

Atleti’s two biggest games this season have added to their growing profile as a team that will grind out narrow wins against any lesser or off-form sides, but who are neither ruthless nor “survive at any cost.” First they were dismantled 4-0 in Munich by the defending champions in Champions League Group A then, domestically, Madrid made them look naive like children and athletically like pensioners in a 2-0 victory at Estadio Alfredo Di Stefano in December.

Gab Marcotti reacts to Joao Felix’s ‘shush’ celebration and believes the striker still has a lot to prove ahead of the Madrid derby.

The worrying thing, above and beyond bloodless performances in matches that can be the gateway to trophies, is whether Simeone is following a Wenger-style decline by losing his edge and becoming “comfortable.” Genuinely outstanding though the Frenchman’s legacy at Arsenal will always be, Wenger’s beginning to steer the team, the club and his own ambitions away from major trophy success had its roots in Arsenal building an ambitious and massively expensive new stadium. Ring any bells, Atleti fans?

Arsenal and their manager certainly had the responsibility to earn as much money as possible from every single opportunity but Wenger’s watchword began to be “top four.” Not winning the title; not winning the Champions League. No. Finishing fourth in the league to guarantee the money that comes with playing European football for another season.

As early as 2012, Wenger, the manager who had conquered the fabled “Double” in 1998, had been brave enough to go toe-to-toe with Ferguson at his fieriest and for whom the 2003-04 “Invincibles” went the extra mile time and time again, began to say that “qualifying for the Champions League is like a trophy.”

It’s not. Not in the least. It’s vital, it’s lucrative and it may be the key to a coach keeping his job — but it’s not, and never will be, the same as actually winning a trophy. Confuse the brutal effort it requires to be “winners” with the managed, actuarial calculations needed to be financially successful and in sporting terms, you’re already half-dead.

Wenger lasted six more years, during which Arsenal were uncompetitive for the English title; standards slipped and “second best” became good enough throughout the club until they inevitably failed to make the top four in 2017 and haven’t played Champions League football since.

It was a slow and debilitating rot; sad to watch and still nowhere near fully cured. Of course, it must all be set against the fact that 20 consecutive qualifications for the Champions League, and multiple FA Cup wins, earned many millions for a club which had a sizeable wage bill, which tried to compete for decent signings and which built an impressive £390m (about £590m in today’s terms) stadium.

By 2017, when Atleti opened their Wanda Metropolitano stadium it had cost €310m. Even given player transfers, the sale of their former Vicente Calderon stadium and loan facilities, this achievement wouldn’t have been possible, certainly under the same building schedule, without the €530m-plus earned in UEFA revenue, from Simeone’s exploits in European football, since he joined.

Both in financial and trophy terms, Simeone is Atletico Madrid‘s “Golden Child,” but that big-game record I detailed above found it’s absolute lowest point last week against Chelsea.

Not only were Atleti abject, the entire strategic concept was craven. Fresh off the disappointment of dropping five points in two games against Levante — and seeing what was once a yawning lead at the top of La Liga cut to three points to feel the hot, angry breath of Real Madrid on their necks — Simeone plotted the “home” leg against Chelsea as if Atleti were a small club. Their setup was listed as a 5-3-2, but Los Rojiblancos often defended with six!

Chelsea knew that the 34-year-old Luis Suarez couldn’t sprint 30 metres into a gap, guessed that Simeone would be daft enough to keep Moussa Dembele on the bench and that Marcos Llorente, who thrives off space to run in behind defences and create goal scoring chances, would be relegated to right wing-back (which was a calamitous mistake.) So the Blues defended high, pressed Atleti back and won every single tactical bet that manager Thomas Tuchel made. They won 1-0 — with an away goal — too.

It was arguably the weakest, least acceptable and non-streetwise performance of the entire Simeone era. If a trainee coach trying to earn his UEFA licence displayed that kind of tactical, strategic maladroitness, he’d have failed before being told to come back next year after a torrent of remedial homework.

Last weekend, away to Villarreal, Atleti re-emerged: hard-nosed, recognisable, stubbornly committed to maintaining what little of their La Liga lead was left and they took away a three-point haul that just might prove to be the most important of their season.

After conceding in eight straight games, the worst record in Simeone’s entire reign, suddenly a clean sheet arrived in a 2-0 win. Real Madrid subsequently dropped points at home to Real Sociedad and now, in the blink of an eye, redemption is hovering just within Simeone’s reach.

When this once belligerent, hungry Argentinian first arrived to grab Atleti by the scruff of the neck and haul them back into contention he ended a 14-year run during which Atleti, by hook or by crook, simply couldn’t beat Madrid in a derby match.

The 2013 Copa del Rey final ended that brutal stain on Atleti’s history. Now, as previously stated, it’s once again six long, sore years since they defeated Los Blancos on Atleti turf. When Simeone took over Los Rojiblancos hadn’t won the title for 15 years — he sorted that too.

Whether or not he and Atleti can put right the atrocious display against Chelsea when they travel to Stamford Bridge later this month isn’t exactly irrelevant. But the key prize is becoming Spain‘s champions. Even in the absence of their extraordinary fans, Simeone has the playing resources and the points total, while there are sufficient difficulties in the opponents’ camps, to haul Atleti to what would be only their third Spanish title in 44 years.

What’s now in question is whether this once ferocious, voracious man still has the tactical shrewdness, the electric energy, the ambition, the drive, the confidence and admirable cheekiness which can force Atleti over the finishing line in May. Or has Simeone, for similar reasons, after similar success and with an almost identical degree of power at a club he’s made great, turned into a latter day, “comfortable” Wenger? Sunday afternoon against Madrid will provide a partial answer.