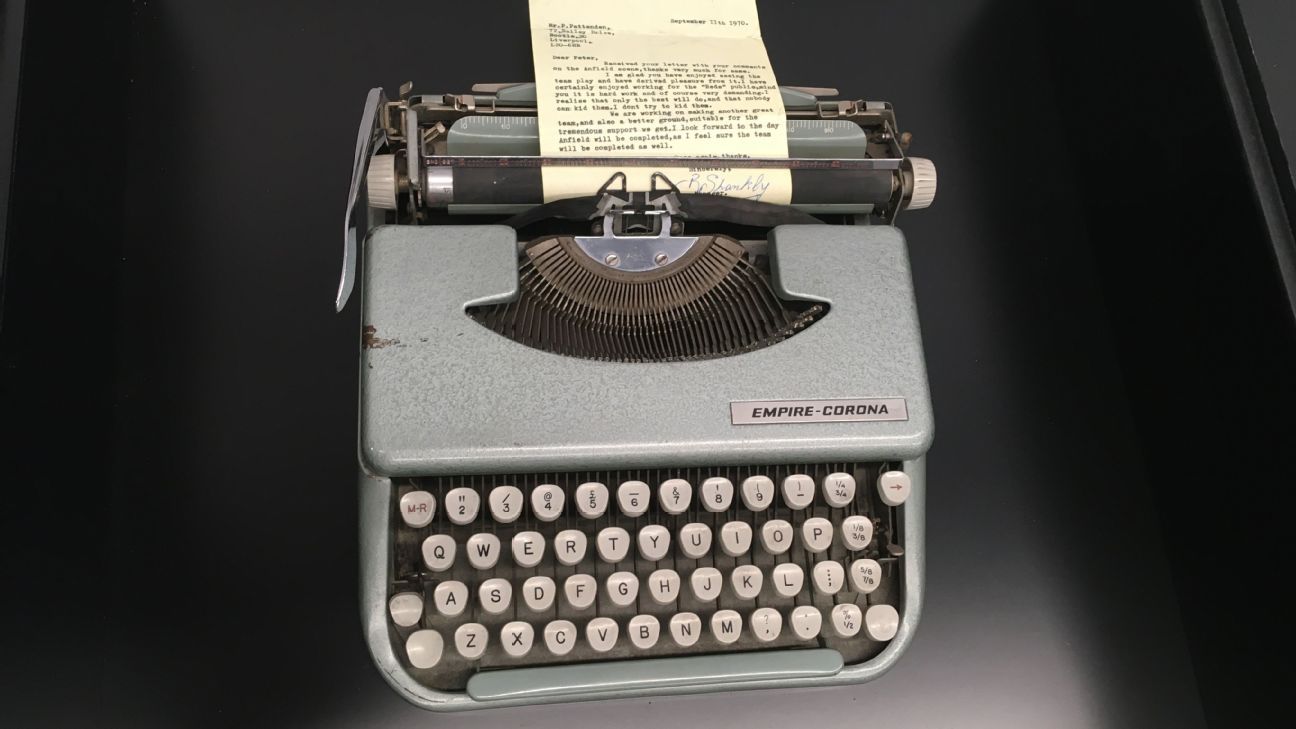 At every top club there is the internal conflict between the need to modernise and expand — reaching out to new global fans and recruiting the world’s best talent — and maintaining their identity through a shared sense of history and culture, and Liverpool are no different.

Stephen Done has seen many changes at the club, both in his lifetime as a supporter and a quarter of a century as their historian and chief curator of the Anfield museum. Few changes have been as significant as the recent departure after more than 70 years from Melwood, the beloved training ground that was revolutionised by club’s great manager Bill Shankly and became a part of club folklore, to a new state-of-the-art complex a few miles up the road in Kirkby.

A key part of the job for Done and his counterparts at other clubs is to bridge the divide between the future and the past. No single item does that better for Liverpool’s staff than the one which takes pride of place just outside the manager’s office at the new training ground.

“Just outside the area where the senior management all work, there’s an area with a couple of chairs and a lovely glass-topped table, and inside that is Bill Shankly’s typewriter,” Done tells ESPN. “It’s the typewriter he used all the time at home, to write all of his wonderful letters and correspondence with Liverpool fans.”

An excerpt from a letter which sits in the feed roller of the typewriter, dated Sept. 11, 1970, reads:

“I am glad you have enjoyed seeing the team play and have derived pleasure from it. I have certainly enjoyed working for the “Reds” public. Mind you, it is hard work and of course very demanding. I realise that only the best will do, and that nobody can kid them. I don’t try to kid them.”

“There’s something so prosaic and humble about it, and the modern management team wanted it as a connection to the past,” Done adds. “It’s what we at the LFC museum try to do — re-use our club history in a meaningful way that still has resonance today.”

This week the club auctioned off around 400 lots of Melwood memorabilia, with a proportion of the proceeds raised being donated to the LFC Foundation.

The auction raised a total of £373,000 ($521,000) thanks to the sale of unique items such as the “Champions Wall” (£30,000), two couches from manager Jurgen Klopp’s office (£3,200 and £1,600) and even more basic pieces such as the name plate on Divock Origi‘s parking space (£500). The auction offered fans a rare chance to own a genuine piece of Liverpool history that could not fit in the club’s own extensive collection.

Done was recruited to set up the museum in the mid-1990s. A mark of how seriously the club took the project was Roy Evans, the club’s first-team manager at the time, being on the interview panel. “Last time I saw Roy, he said it was the worst decision he ever made!”

Since opening the museum at Anfield in 1997, millions of fans have passed through its doors to see exhibitions that Done has curated. In 2019, 328,000 visitors came to learn about the club’s rich past, from their humble beginnings in the 1890s right through to the present day.

The museum is already full of the trophies and medals won by the Liverpool teams of yesteryear, containing around 600 items in total, but this new era of success has added a fresh influx of modern pieces added to the collection.

In September the Liverpool museum has opened an exhibition called (borrowing a turn of phrase from Klopp) the “Boom Room,” which picks up the club story from the point the Reds lifted the 2018-19 Champions League trophy in Madrid and takes in their subsequent Premier League and FIFA Club World Cup successes.

The exhibition includes the jersey Trent Alexander-Arnold wore in the Champions League final win, donated by the right-back (“he’s a bright lad because he knows that his shirt will probably never go off display, so he’ll always know exactly where it is!”) as well as the shirts worn by Mohamed Salah and Alex Oxlade-Chamberlain during the Merseyside derby in June 2020 — Liverpool’s first game after the league restart following the first national COVID-19 lockdown. That day, all players in the Premier League wore the “Black Lives Matter” message above the numbers on their shirts instead of their names, and also wore badges in tribute to the NHS.

“This was a really big moment with all that was going on in the world at the time so those match-worn shirts, with those two gestures, are a piece of history,” Done said. “They’re part of a national and international story, and they’re ours. I know for a fact that the National Football Museum were desperate to get them.”

The Boom Room also contains the very pair of glasses that Klopp wore as Liverpool beat Tottenham to lift the Champions League trophy (which sustained some damage in the ensuing revelry), as well as to keep the confetti from falling in his eyes on the subsequent bus parade.

It turns out that Klopp has donated a total of three pairs of his trademark spectacles (“all really expensive, all authentic, all worn at significant moments”) to the club for posterity: he also gave up the pair he wore during the Premier League celebrations, while a further pair have been buried at Kirkby as part of a time capsule. “The ones in the capsule are obviously important too, but perhaps the pair we could most afford to bury underground for the next 50 years!”

While you would expect to find match-worn memorabilia on a visit to any club museum, Done also had the foresight to retrieve some seemingly commonplace, insignificant items that help to fill out the incredible story.

“On the open-top bus tour for the 2019 Champions League, I actually scooped up a lot of the confetti that landed on the bus and so we have some of that displayed,” Done said. “We’ve got a whopping great bag of the ticker tape from the Premier League trophy celebrations [behind closed doors on a platform specially built at Anfield]. These are all just little moments, captured forever.

“It’s just an attempt to bottle a moment that so many of us fans had to watch remotely. In fact. we’ve also got a special bottle of beer that was actually signed by all the staff and players who were there on the evening — one of the only bottles they didn’t open and spray everywhere!”

When it comes to the most valuable item in the Liverpool museum collection, an obvious pick might be former Liverpool and England striker Roger Hunt’s 1966 World Cup winners’ medal, one of only two from that tournament on public display in the world. However, there is another piece that has soared in value in recent years, thanks largely to UEFA and their administrative policies.

“Our Champions League trophy from 2005 [Liverpool’s fifth triumph in the competition] is the last real genuine trophy that UEFA allowed the winning club to keep before they changed the rules,” Done explained. “Now, winners have to hand the real trophy back after the ceremony. Ours is the one that all those previous teams held up, drank from, dropped, dented — and it’s in the LFC museum forever. What price can you put on that?”

Speaking of priceless, every museum curator has a “Holy Grail” piece that they dream of adding to their collection, and Done is no different.

“They were blue-and-white halved shirts and I’m absolutely certain none will have survived, but I’d love to be proven wrong. I live in hope. That would be at the very top of my list, and these things do happen from time to time…”

When setting Liverpool’s achievements of the last few years against the club’s great golden eras of the past, Done was unequivocal.

“It’s certainly not going to fade away!” he replied. “People still talk about Istanbul. It was one of the greatest European finals of all time, but at some point you start to realise that 2005 was a long time ago, a generation in fact.

“Then you realise we not only won the Champions League in 2019, but three titles in total — titles that we’d been desperately chasing. That’s when you realise that incredible year is going to live on in the memory for a long, long time.”