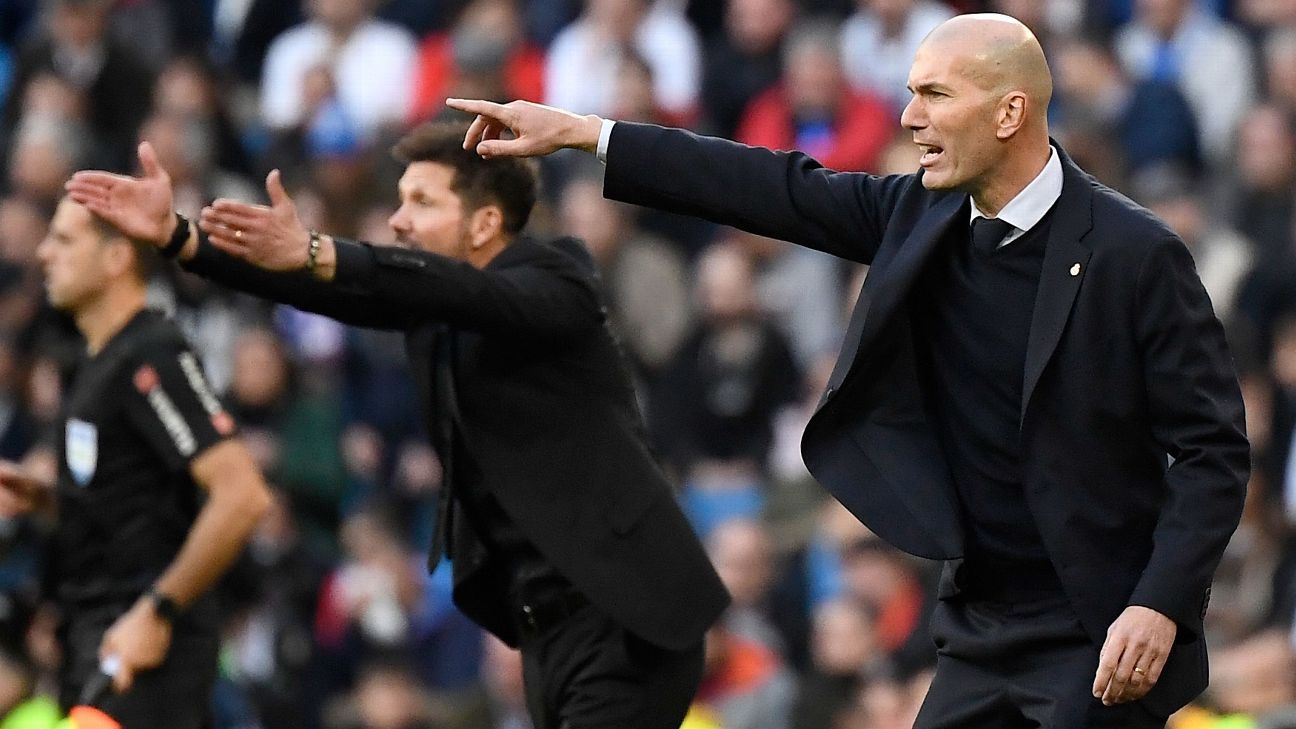 Zinedine Zidane has said Real Madrid will stay in the La Liga title race whatever happens in Sunday’s derby with leaders Atletico.

Madrid go into the match at the Wanda Metropolitano five points behind Atletico, who also have a game in hand.

“It’s a final, but like every other game,” Zidane said in a news conference on Saturday. “When we play, we always have to win. Whatever happens tomorrow, we’ll be alive in the league.”

Madrid have won five of their last six games in all competitions, recovering from a January slump that saw them knocked out of the Spanish Supercopa and Copa del Rey and beaten in La Liga by Levante.

They are yet to taste defeat at the Wanda since Atletico’s move there in 2017, and were comfortable 2-0 winners when the teams last met in La Liga in December.

“That doesn’t mean anything,” Zidane said. “This is another game, another story. The past won’t help you at all.”

Zidane also confirmed that Madrid’s top scorer Karim Benzema is available for selection after being out through injury since Feb. 14.

“He is important to our system of play, above all when we have the ball,” he added. “We won’t take a risk, if there’s a doubt, a player can hurt themselves and be out for longer. You’ll see [if he starts] tomorrow.”

Benzema aside, Madrid have struggled for goals this season, and their next highest scorer in La Liga is defensive midfielder Casemiro with five.

Atletico had a 10-point lead at the top of the table a month ago — but that gap has steadily shrunk since then, as Diego Simeone’s team drew twice and lost once in February to give both Madrid and Barcelona hope.

“It’s a match-up between two teams who are in similar situations, but they’re three points,” Simeone said on Saturday. “There’s a lot at stake, but that’s also true on Wednesday and next Saturday.

“10 or 12 games ago we were talking about a huge gap, a season that hadn’t been good for Real Madrid and Barcelona, and now they’re competing well. It’s a long season. We have to keep going.”

Full-back Kieran Trippier is expected to return for Atletico after his 10-week ban for breaching Football Association betting rules came to an end.

“He’s looking forward to playing,” Simeone added. “He’s an important player with quality and experience, and he gives us a lot.”

100 days to 2022 World Cup: Why your team will (and won’t) win in Qatar
Vela strikes in MLS All-Star win over Liga MX
Glass half empty? Man Utd told Ten Hag to lower hopes for the season
Mexico’s Sanchez moves to Ajax from America
Man City hit four past Bournemouth in easy win