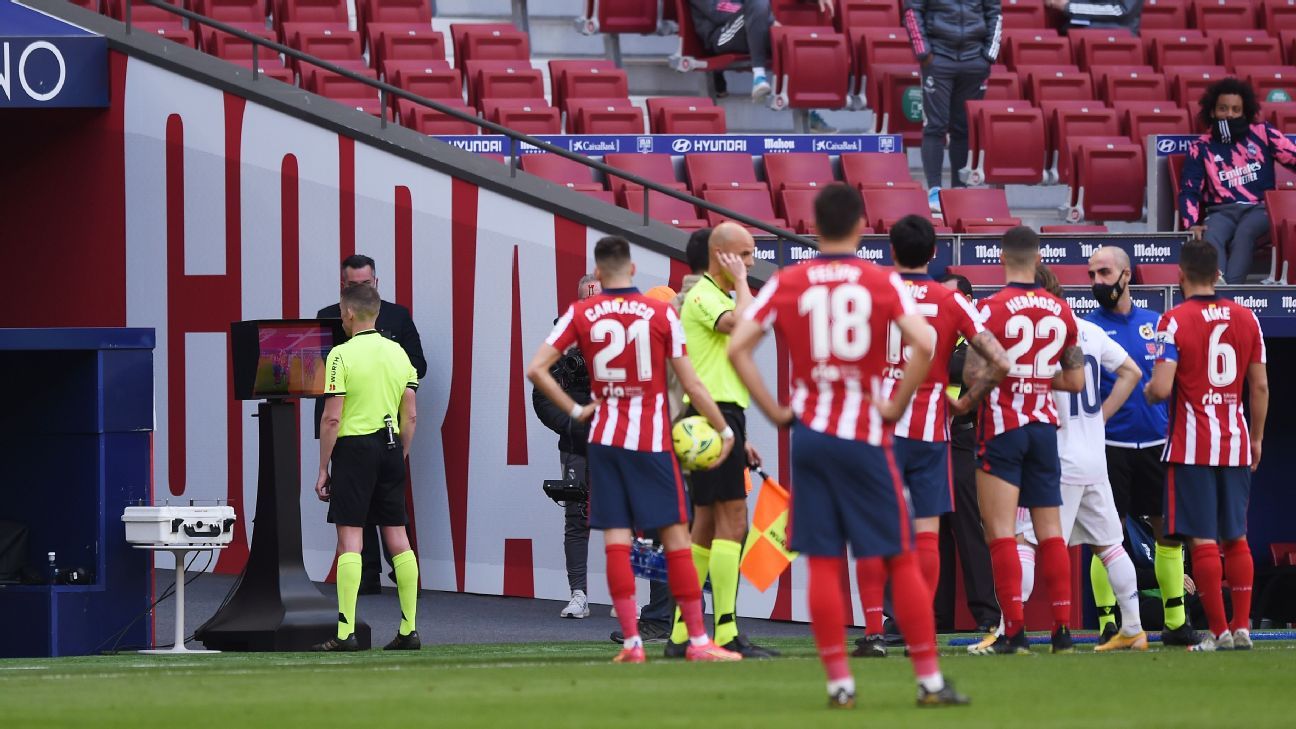 Atletico Madrid have taken an apparent swipe at rivals Real Madrid on social media over complaints about the referee in Sunday’s derby.

“They even criticise correct decisions…” the club tweeted on Monday afternoon, adding that “Some people are used to always having the wind behind them.”

The tweet comes after Madrid’s criticism of referee Alejandro Hernandez Hernandez for failing to award them a penalty for handball during the 1-1 draw, which saw Atletico maintain their lead at the top of La Liga.

Madrid were 1-0 down in the first half — after Luis Suarez had opened the scoring — when Toni Kroos‘ corner touched Atletico defender Felipe‘s arm.

Hernandez was advised to take a look at the incident on the pitchside VAR monitor, before deciding that no offence had been committed. Madrid went on to salvage a point through Karim Benzema‘s 88th-minute equaliser.

They remain five points behind Atletico having played a game more, while a win would have narrowed that gap to just two points.

“[The handball rule] isn’t even clear for us,” midfielder Casemiro said after the match. “If it hadn’t touched his arm, I was going to score.

“I explained that to the referee, but it’s his decision and we have to respect it. Alejandro is a good referee. He went to look at it with VAR and that’s positive. I tried to explain that if [Felipe] hadn’t touched it, I was alone behind him.”

The decision was also confusing to Madrid striker Benzema, who suggested similar incidents usually resulted in the awarding on a spot kick.

“I think it hit his arm,” Benzema. “Normally when the referee goes to look at it, 90% of the time it’s a penalty.”

Coach Zinedine Zidane refused to be drawn on the issue in his postmatch news conference, when he said: “It is a difficult job. We have to respect the decision.”

“We believe it’s a penalty, it’s clear that the ball struck the arm,” he said. “Once again, we haven’t had any luck with Hernandez Hernandez.”

Madrid were unhappy with the same referee in December 2019 over his handling of their Clasico clash with Barcelona, when they claimed that he failed to award them two penalties in a 0-0 draw at Camp Nou.

Atletico have the chance to extend their advantage at the top of La Liga on Wednesday evening when they play their game in hand, hosting Athletic Bilbao.