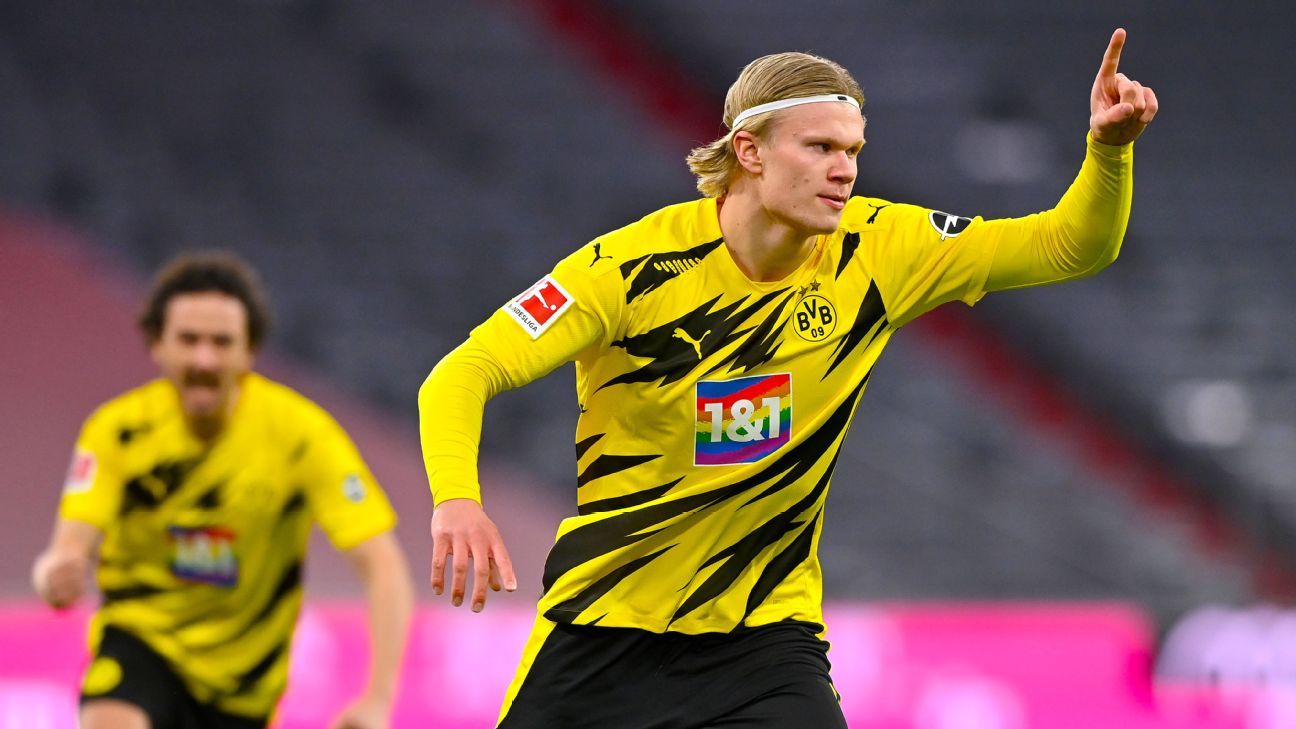 There has never been a football player in such great demand as Erling Haaland. Lionel Messi and Cristiano Ronaldo may have been the dream signings for every top club in the world for the past decade, and Kylian Mbappe might one day enter that bracket, but none of them right now are in the position that Haaland now enjoys. He can pick whichever A-list team takes his fancy.

Barcelona have paid Messi so well over the years, and won so many trophies, that he is only now, approaching his 34th birthday, able to think about exploiting his free-agent status this summer. But even if he moves on, his huge wages and demands will severely limit his options.

Juventus forward Ronaldo has similarly been tied to Manchester United and Real Madrid for the best years of his career, until those clubs felt able to let him go. As for Mbappe, Paris Saint-Germain‘s financial power will always give them a level of control over the 22-year-old’s future — even if he is a wanted man.

Haaland’s situation is different: the unique combination of the 20-year-old’s prodigious talent and contractual situation at Borussia Dortmund means he will enter this summer as the player with the world at his feet. He is the hottest property in the game, and at a time when nearly all of the leading clubs need a prolific centre-forward. Haaland and his advisors are smart enough to know that they can stand back and watch as the scramble to sign him unfolds.

In October 2019, shortly after Haaland scored a hat trick for FC Salzburg on his Champions League debut against Genk, his father Alfie told ESPN that each step in Erling’s career would be taken with great thought, rather than jumping at the first opportunity to come along.

Jan Aage Fjortoft outlines why Erling Haaland’s ego gives him an exta edge on the pitch for Borussia Dortmund.

“If he has choices, you have to be careful with what you choose,” Alfie said. “We look at the history of the club, the manager, their philosophy.”

Two months later, Haaland rejected a move from Salzburg to Man United, in favour of Dortmund, because of the development path a move to Germany offered. Sources have told ESPN that Haaland and his advisors believe the decision has been justified, and any future move will be taken with the same long-term perspective.

There is a growing likelihood that the next move will happen this summer, a year before a €75m (£64.5m) release clause can be triggered in his Dortmund contract. Dortmund know they could sell for at least double that figure at the end of this season and, if they fail to climb from sixth into the Bundesliga top four and qualify for the Champions League, selling their prized asset may become a financial necessity.

But where is Haaland most likely to go? Don’t be fooled into believing he’ll simply follow the money and sign the most lucrative deal on the table.

Almost every major club in the world wants him. United tried and failed to sign him last season, but manager Ole Gunnar Solskjaer continues to regard the player he coached as a teenager at Molde as his No. 1 target.

Chelsea also believe they can do a deal for the Norwegian and lure him to Stamford Bridge, while Manchester City, having identified the need to sign a long-term replacement for the out-of-contract Sergio Aguero, are emerging as a leading candidate to sign the son of Alfie, who made 41 appearances for City between 2000-2002.

The COVID-19 pandemic is likely to impact Liverpool‘s ability to compete, but they are interested nonetheless, while Real Madrid are regularly linked with a big-money move for the player in the Spanish media.

Juventus have been in the hunt for Haaland since his time at Molde and could return if Ronaldo leaves and frees up space on the wage bill, while Bayern Munich coach Hansi Flick said “a lot is possible in life, I can’t rule that out,” when asked, after Haaland had scored twice against Bayern at the weekend, whether the European champions would be interested in signing him.

Sources close to Haaland will not express a preference for his next club, but they know that interest from all the above sides is genuine, and that each team offers a different challenge and opportunity. They all have their pros and cons, too.

From the outside, City appear to offer the perfect package. They have the financial strength to do a deal and, under Pep Guardiola, are likely to offer the strongest guarantee of challenging for major trophies. City are desperate to win the Champions League, as is Haaland, and it’s clearthey would be a formidable force together.

But Haaland is a player with ambitions to play in all of Europe’s big leagues, in a similar fashion to Zlatan Ibrahimovic, and moving to City would make that difficult. City, quite simply, don’t lose their star players, so a move to the Etihad would be for the long-term.

United, on the other hand, would sell the challenge of being the man to carry the club back to the top by being a modern-day version of Eric Cantona. United have lost their place among the elite clubs challenging for the biggest prizes, but the commercial value to Haaland of being their star player would be huge due to United’s global popularity, and that could be a compelling offer — especially if Solskjaer, who remains close to Haaland, continues as manager.

Chelsea could match the money City and United would offer, and use the pull of London to tempt Haaland to Stamford Bridge. Only City have won more trophies in England over the past 10 years, so Haaland would be signing for a club capable of winning silverware, albeit one that lacks consistency due to the ever-decreasing shelf-life of their managers.

Liverpool’s slump in recent weeks could cost them a place in next season’s Champions League and end any faint hopes of signing Haaland, but if he’s tempted by the prospect of playing at Anfield and joining the club’s list of legendary names, the romantic appeal of signing for the Premier League champions could be persuasive.

As for Real Madrid, they can outdo United for global appeal and star quality. They can also give Haaland the chance to dominate La Liga just as Ronaldo and Messi have over the years. And while their Champions League pedigree is a huge draw, doubts remain over whether Real can afford Haaland in the wake of the pandemic.

Juventus can offer Champions League football and another stepping stone towards a move further down the line. If Haaland succeeds in Italy, he could then head to England or Spain before he is even in his mid-20s.

And then there’s Bayern. Robert Lewandowski has already shown what riches await for a centre-forward prepared to leave Dortmund for the Allianz Arena, and Haaland could be the perfect long-term successor for the 32-year-old Poland international. But just like a move to City, Bayern would offer trophies, but they may also expect him to stay for 10 years.

Whichever way it plays out, Haaland can only end up as a winner. With such an array of stellar clubs on his tail, it’s impossible to make a bad choice. Sources have made it clear to ESPN that the one factor that won’t drive Haaland’s next decision is money. It will be about the most enticing challenge and the most compelling story. That chapter is yet to be written.