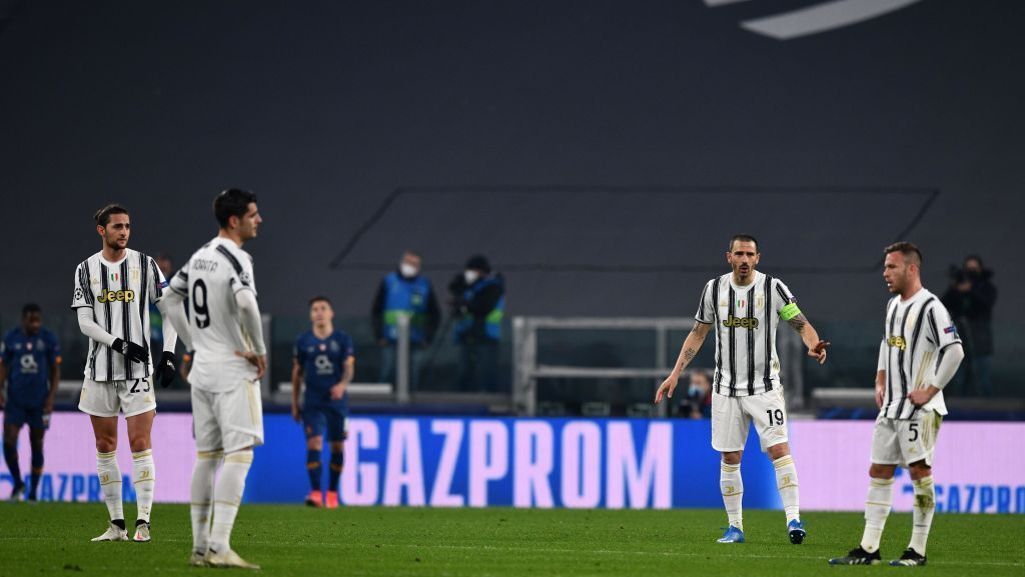 Juventus are out of the Champions League, and deservedly so, on balance. You can break down the episodes from both legs of their last-16 game with a fine-tooth comb and tell yourself this could have ended differently: they gifted Porto two goals in the first leg, they hit the woodwork twice on Tuesday and maybe, if Alvaro Morata, Adrien Rabiot and Cristiano Ronaldo had shown a little more concentration and bravery on Sergio Oliveira‘s free kick in extra-time, you wouldn’t be reading this column (at least not in March). Instead, all three jumped and turned at the same time, allowing the ball to sneak under the wall and into Wojciech Szczesny‘s far corner.

As Fabio Capello, speaking to Andrea Pirlo on Sky Italia post-game, pointed out, “I would never allow my players to do that,” Capello said. To which Pirlo, sheepishly, replied: “It was a mistake, sure. I’d never seen them do that before.”

But make no mistake about it, it’s still a fully deserved elimination. Juventus were very poor for two halves in Porto, and for the first half on Tuesday. As defender Matthijs De LIgt admitted, “we started playing too late.” Indeed. And that was mostly against 10 men following Porto striker Mehdi Taremi‘s red card early in the second half.

When Juventus did start playing, they created plenty of chances, and did so with energy and verve. The question many are asking is what it takes for them to do it consistently and whether Pirlo can take them to that level. We’ll get to that, but first, we need to explode some myths and trite cliches that have been part of the “Juvesphere” (meaning some fans and pundits and even some club officials in recent years but which have no place if you want to be a grown up team in 2021).

Let’s start with the mantra that “there’s no such thing as a transition year at Juventus” and it’s closely correlated cousin, “winning isn’t important… it’s the only thing that counts.”

The latter, of course, is a riff on Green Bay Packers coaching legend Vince Lombardi (“Winning isn’t everything, it’s the only thing”) who was himself, supposedly, inspired by UCLA coach Red Sanders. It was repeated by former Juventus president (and club legend) Giampiero Boniperti on numerous occasions. It’s nice as an inspirational quote, or as something to inscribe on the team jersey (like Juventus did in 2013). But break it down and it’s as silly and juvenile as the other quote, the one about winning being so important at Juve that they can never have a transition season.

First and foremost, that’s not what club president Andrea Agnelli himself believes. When you hire a thoroughly inexperienced coach like Pirlo, with a mandate to transition to another way of playing and promote youngsters from the youth team, and when you sign players who are not the finished article (Federico Chiesa, Dejan Kulusevski, Weston McKennie) you are clearly transitioning to a new project that, you hope, will bring long-term success.

Pirlo literally said as much after the game: “We have embarked on a new project, it covers many aspects of the club at 360 degrees, and it’s not just about one season, but many seasons.”

Another mantra — “Cristiano Ronaldo was signed to win the Champions League” — is closely related to this. Again, it’s a bit of an exercise in the obvious — any player Juve signs is there to win the Champions League, because that’s the competition they try to win every year — but there’s a fundamental truth in it. Juventus committed some $375 million in transfer fee and wages to Ronaldo in the hopes that he would be the final piece of the puzzle.

That was undoubtedly true in 2018, when he arrived at the club from Real Madrid. To give him the best possible supporting cast, Juventus spent huge over the next two seasons, both in transfers (more than $200m went on De Ligt, defender Joao Cancelo, forward Douglas Costa and bringing back defender Leo Bonucci) and hugely paid free-agents (midfielders Emre Can, Aaron Ramsey and Adrien Rabiot).

But that was then. At some point, the club realized that they couldn’t keep doubling down every year by splashing money on Ronaldo’s supporting cast. The coronavirus pandemic didn’t help either, obviously, and they ended up with three straight years in the red, culminating with a loss of nearly $100m in 2019-20.

Though it wasn’t purely financial. They spent big again this past summer, but they went for younger players with a long-term upside. And crucially, they came to the realization that the mentality and the way of playing had to change if they were to succeed in Europe.

With the exception of Atletico Madrid and Diego Simeone’s “Cholo voodoo,” every other club who was making deep runs in European competitions was doing it by taking the game to the opposition, being brave and progressive and playing higher up the pitch. And to be fair, it’s not as if the realization only hit them this past summer.

Max Allegri realized it when he pushed his “five-star” attack (Paulo Dybala, Juan Cuadrado and Mario Mandzukic augmented by Miralem Pjanic and Gonzalo Higuain in 2016-17), and when they turned to Maurizio Sarri in 2019, it was to get the high-powered, front-foot “Sarriball” we saw at Napoli. Neither, however, was able to make it work and, too often, they reverted to what they knew: sitting tight, staying deep and waiting for Ronaldo (or somebody else) to do something at the other end. Getting a side filled with veterans, who had enjoyed tremendous success (not just domestically; don’t forget the two Champions League finals either) playing a certain, more conservative way, to embrace a different philosophy was always going to be a massive challenge.

Craig Burley examines what Juventus’ elimination from the Champions League could mean for Cristiano Ronaldo.

Hence the appointment of Pirlo and the shake-up we saw in the summer — which, by the way, was embraced by Ronaldo too. Sure, in a perfect world, the football Pirlo would like to play probably works better without Ronaldo (or, more accurately, with a younger version of the superstar). But Ronaldo is unquestionably happier with more players around him, operating on a more attacking team, and it’s probably not a coincidence that as awful as he was on Tuesday night, he’s enjoying his best season yet at Juve and has remained a staunch supporter of Pirlo throughout.

So why hasn’t it worked?

For a start, it’s worth noting that it’s not as if Juventus have regressed in Europe over the last few years. They were knocked out at the Round of 16 in 2019-20 by Lyon and, but for a superhuman Ronaldo performance in the return leg in 2018-19 against Atletico Madrid, would have been knocked out in the Round of 16 the following year too (as it happened, it was Ajax who eliminated them in the quarterfinal).

Up front, Pirlo has taken time to find the right balance in attack and the best way to use Kulusevski and Chiesa, while also dealing with Dybala’s absence. At the back, the defensive movements aren’t quite what they should be yet as Juve adapt to playing a higher line. But the main issue is in midfield, where the absence of a natural playmaker weighs heavy. Arthur has the personality, but not the creativity, to play that role, Rabiot and Ramsey blow hot and cold and Rodrigo Bentancur has regressed.

Should Pirlo then be doing more with what he has at his disposal? Probably, but then, it’s his first season. That said, it’s not lost on anyone that if the priorities are youth, intensity, attacking football and bravery, we saw none of it in the first leg or until half-time in the second leg.

Does Pirlo have the charisma, tactical nous and personality to do more and be a top-drawer coach? Time will tell. But what should not be in question is that Juve have committed towards going in a certain direction, one that brings them more in line with Europe’s other top clubs. (One that includes pushing youngsters, something that never used to happen at the club: would we have seen youth players Gianluca Frabotta, Manolo Portanova, Alessandro Di Pardo, Radu Dragusin and Nicolo Fagioli line up for Juve in past seasons? Would we heck…)

Of course, at some point, they may come to the conclusion that Pirlo isn’t the right guy to lead them. But if they do change, they’ll go for somebody with very similar ideas, because that’s the direction the club is heading. And for now, at least, there’s no going back.