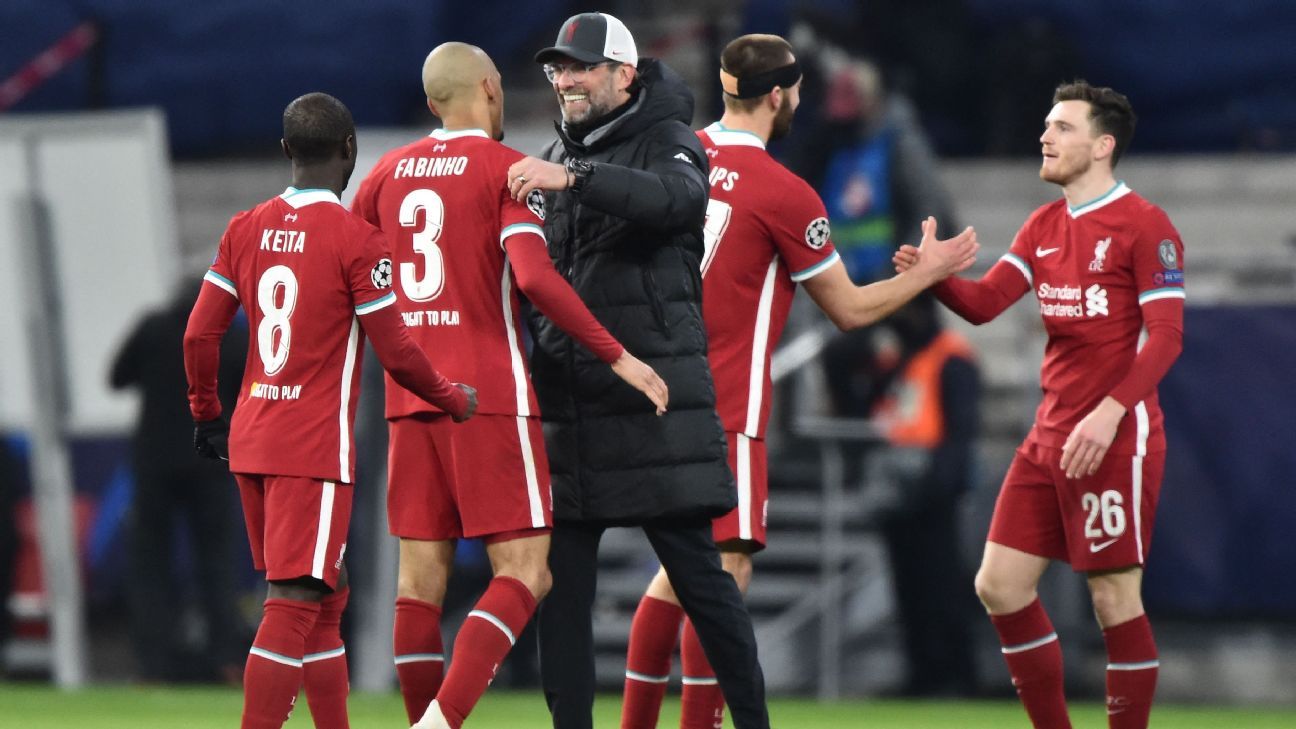 Liverpool might need to recreate the so-called “Miracle of Istanbul” if they are to qualify for next season’s Champions League, but as bad as Jurgen Klopp’s team have been in the Premier League in recent weeks, the flame of European glory continues to flicker this season after a 4-0 aggregate victory over RB Leipzig secured a place in the quarterfinals.

Second-half goals from Mohamed Salah and Sadio Mane, four minutes apart, in Budapest’s Ferenc Puskas Arena were enough to win Liverpool’s “home” leg of this round of 16 tie, which has seen all 180 minutes played in the Hungarian capital due to COVID-19 travel restrictions forcing the two games to be staged outside of England and Germany.

– Stream ESPN FC Daily on ESPN+ (U.S. only)
– Champions League: When is the quarter and semifinal draw?

Despite a dismal run of domestic form that has led to Liverpool dropping to eighth in the Premier League, seven points adrift of the Champions League spots on the back of six successive league defeats at Anfield, Europe has once again been a sanctuary for the six-time Champions League winners.

But it now needs to offer Liverpool more than a welcome distraction from the embarrassing defence of their Premier League title. Realistically, winning the Champions League again is their best hope of playing in the competition again next season.

Back in 2005, Rafael Benitez’s Liverpool finished fifth, outside the Champions League qualification positions, but famously went on to win the European Cup against AC Milan in Istanbul — winning on penalties after trailing 3-0 at half-time — to claim a place in the following season’s tournament.

Although that Liverpool team possessed outstanding players such as Steven Gerrard, Xabi Alonso and Jamie Carragher, it was certainly not one of the greatest teams in the club’s illustrious history. But it overcame the odds, and Juventus and Chelsea in the quarters and semis, to achieve one of the most memorable victories in Champions League history.

That this season’s final is also in Istanbul, a year after the pandemic forced it to be moved for the Turkish city, will undoubtedly have many Liverpudlians believing that the omens are on their side. Liverpool also eliminated a German club — Bayer Leverkusen — at the round of 16 stage in 2005, so maybe the stars are beginning to align again.

But if we take away the romance and search for comparisons between now and 2005, is it legitimate to believe this Liverpool team can go all the way and win the Champions League for a seventh time this season?

Having reached the final in 2018 and 2019, winning it in 2019, Klopp’s team certainly knows how to navigate the knockout stages. Klopp also took Liverpool to the 2016 Europa League final, so this group of players has pedigree in European competition.

But the injuries that have de-railed the defence of their Premier League title threaten to also compromise their Champions League bid.

Injuries have ravaged Klopp’s squad and the loss of Virgil van Dijk to a season-ending knee injury has been the most damaging. Jordan Henderson‘s recent addition to the casualty list following groin surgery that will keep the midfielder and captain out until mid-April has been another huge blow.

Defensively, Liverpool have become a soft touch in the Premier League, but against Leipzig, they kept clean-sheets in both legs.

Whether they can manage that against one of Europe’s more fearsome attacking sides remains to be seen, though.

Ozan Kabak and Nat Phillips kept Leipzig quiet in Budapest, but both players lack the experience and quality to do the same against Bayern Munich, Paris Saint-Germain or Manchester City.

In midfield, at least, the return of Fabinho made Liverpool stronger against Leipzig. The Brazilian has been outstanding as a makeshift centre-half this season, but his energy and tenacity has been missed in midfield. If Klopp is able to keep Fabinho in his best position, then Liverpool may just be able to keep the best teams at bay.

If they can do that, Salah and Mane have shown they can score against any opposition in Europe, so Liverpool can still cling to the hope that they can go all way in the competition.

If they get a favourable tie in next week’s quarterfinal draw, a route to Istanbul could open up, but the absence of fans inside Anfield will deny Liverpool one of their biggest assets on a European night.

And there is also the question mark over whether Klopp’s depleted squad can stubbornly defend a lead, or keep it tight enough for 180 minutes, to overcome a stronger side. Benitez expertly marshalled his team to do just that, but there is the suspicion that Klopp’s team is simply not built to contain and frustrate.

But despite all of their shortcomings and problems, Liverpool are still standing in the Champions League. They are into the last eight and can focus solely on getting to Istanbul because it is now the only way to save their season.

Liverpool may lack the depth to go all the way, but that didn’t stop them in 2005. Maybe Istanbul is calling after all.