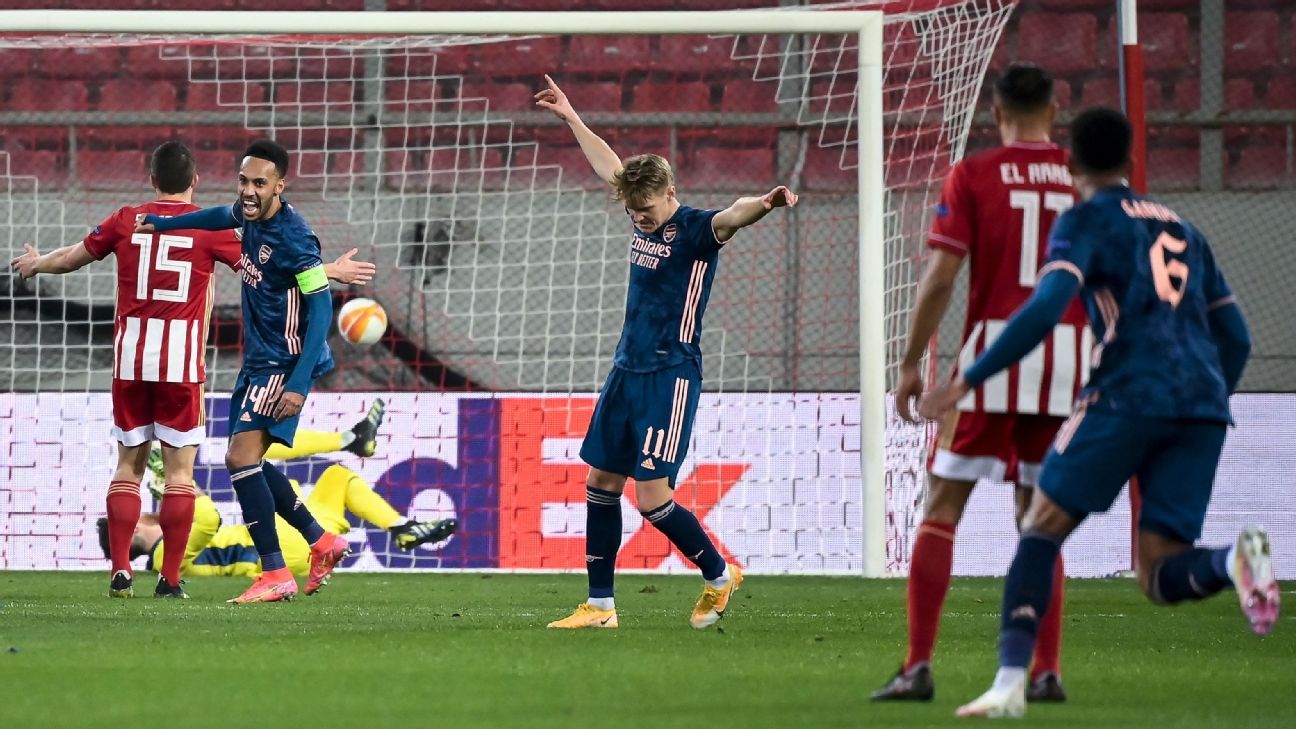 Arsenal head into the second leg of their Europa League last-16 tie against Olympiakos with a two-goal advantage and three away goals thanks to a 3-1 win in Piraeus.

Two goals in the last 10 minutes earned the Gunners a valuable win. Gabriel Magalhaes scored the decisive goal with a sublime header from a corner in the 79th minutes before substitute Mohamed Elneny added gloss to the scoreline with a beautiful shot from range six minutes later.

The Gunners dominated the tie but had gifted the Greek side a lifeline when they were caught in possession, top scorer Youssef El-Arabi punishing Dani Ceballos and scoring from outside the area.

Martin Odegaard had given Arsenal the lead in a first half in which the Gunners started well and were by far the better side. The Norwegian had missed a glorious chance to break the deadlock in the opening exchanges but made up for it with a glorious strike from distance.

Arsenal will be disappointed to concede but they finished strongly and are now overwhelming favourites to win the tie.

Mikel Arteta will be delighted with the way his side started and finished the match. So often slow starters, their tempo was electric from the kick-off and they had several chances to score.

Arsenal dominated early on but, again, mistakes were their undoing. First Odegaard gave the ball away on the edge of his own area to give Olympiakos a sight of goal before David Luiz was then dispossessed before the break. Ceballos was then punished for losing possession ahead of the equaliser. It’s now nine consecutive games without a clean sheet.

8 — This was a positive evening for the Spaniard, who will have loved seeing his side take the game to the home side. Ultimately, it was a comfortable performance, but his side’s inability to manage the game is costing them needless goals every week.

GK Bernd Leno, 6 — Leno was a bystander for much of the game but was equal to Bruma‘s effort on goal when first called into action. He was scrambling to get back to stop the equaliser, though, and ultimately was punished for being out of position.

DF Hector Bellerin, 6 — Bellerin was solid at the back and overlapped well on the right, delivering one or two teasing crosses from good positions.

DF David Luiz, 5 — In his 101st European game, Luiz was guilty of getting caught in possession in his own area. Luckily, Georgios Masouras’ effort was well wide of the target, but it’s a case of poor decision-making in vital areas. Again!

DF Gabriel Magalhaes, 6 — Gabriel didn’t have much to do but he popped up with a marvellous header to put the Gunners ahead for the second time. Earlier, he had played the ball to Ceballos with the Spaniard under pressure, resulting in the Olympiakos goal.

DF Kieran Tierney, 6 — A constant outlet on the left-hand side, Tierney had the beating of his man every time, though his final ball didn’t always match the quality of his movement.

MF Thomas Partey, 5 — An uncharacteristically quiet game for the midfielder, who was taken off before the hour mark as a precaution.

MF Granit Xhaka, 5 — The Swiss midfielder was effective at winning the ball back but he was guilty of giving it away again, which was particularly frustrating when Arsenal were looking to break on the counter.

MF Bukayo Saka, 7 — The lively Saka was always looking to run at the Olympiakos defence and they simply couldn’t handle his pace; he was regularly brought down in and around the edge of the box.

MF Martin Odegaard, 7 — In his ninth Arsenal match, Odegaard opened his account for the club, and scored his first goal in European competition, with a powerful shot from range. The Norwegian had earlier missed a wonderful chance to break the deadlock when he dragged his shot when in space. He was guilty of some sloppy passing, but his movement and awareness in the final third still caused problems.

MF Willian, 7 — The Brazilian has come into some form of late and he found himself in some good positions in the first half. He linked well with Tierney on the left-hand side and was a danger when running at the home defence, though he disappeared a bit in the second half.

FW Pierre-Emerick Aubameyang, 6 — The skipper twice came close to scoring in the first half. First, he watched on as his header from Bellerin’s cross was well saved, and then he saw a well-struck free kick find Jose Sa in the right place at the right time.

MF Dani Ceballos, 5 — Came on and immediately had a chance to play in Aubameyang for a one-on-one opportunity, but his final ball was poor. At the other end, he was caught in possession and duly punished when El-Arabi levelled the scored.

MF Mohamed Elneny, N/R — Scored only his fourth goal for the club when he netted Arsenal’s third when he ran at the home defence and slotted home from distance.

MF Emile Smith Rowe, N/R — The attacking midfielder had only trained once prior to the game but he gave Arsenal an injection of pace in the final third.

FW Nicolas Pepe, N/R — Pepe already had three goals in seven European ties before his late cameo here, and his introduction was enough to keep the home defence on their toes.

FW Alexandre Lacazette, N/R — He had little time to get involved but the Frenchman did have one effort before the final whistle and then broke well at the death before playing a heavy final ball went out of play with Smith Rowe in space.