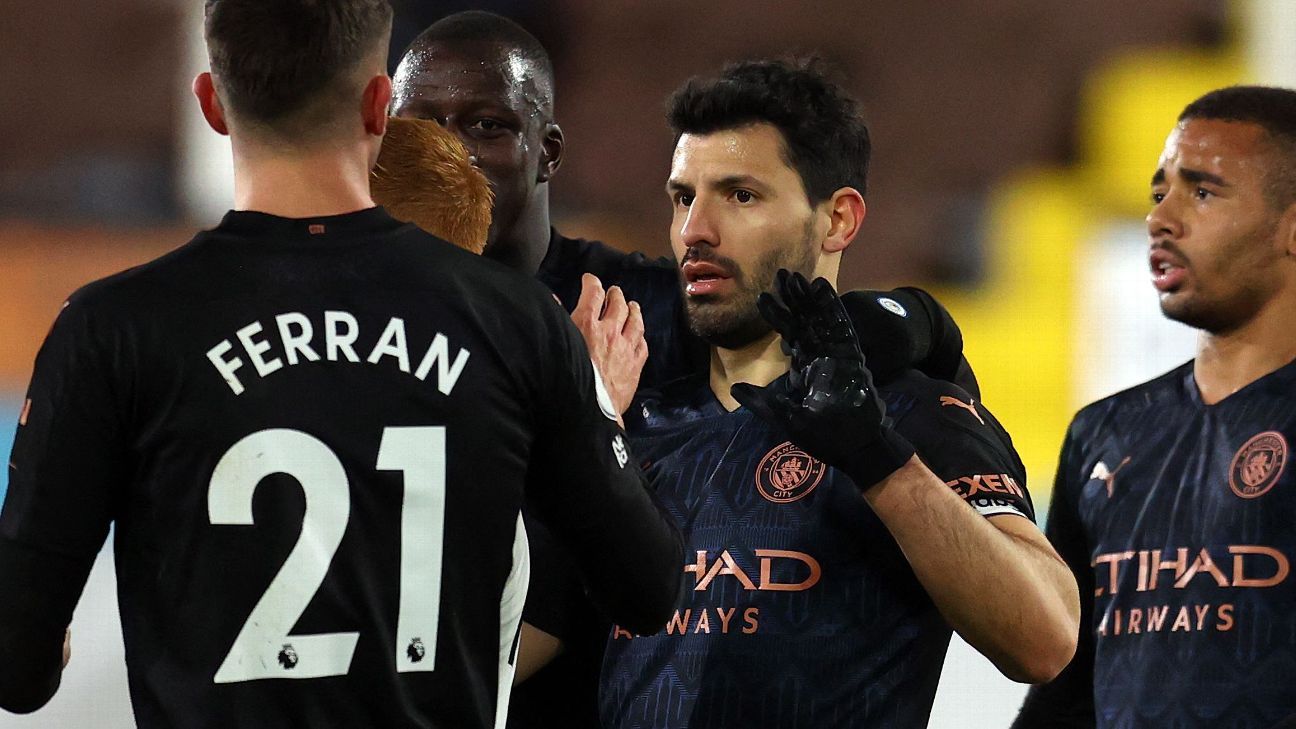 LONDON — There was time when Sergio Aguero‘s importance to Manchester City was a certainty and their success in the Premier League was not.

City eased to a 3-0 win over relegation-threatened Fulham at Craven Cottage on Saturday to extend their lead over Manchester United to 17 points. United have two games in hand but, whatever Ole Gunnar Solskjaer’s side do, City need just five wins from their remaining eight games to secure a third league title in four seasons.

They have achieved such a dominant position largely without their all-time record goalscorer, restricted by injuries and COVID-19 to just four starts this season, with Saturday’s bow just his second since Oct. 24.

The 32-year-old scored his first league goal in 14 months — a barren run mitigated by various factors, not least a global pandemic — netting City’s third from the spot after John Stones and Gabriel Jesus had struck to make the game safe.

“For Sergio it is important [to score],” City boss Pep Guardiola told BeIN after the match. “A long time injured, a tough game with tough opponents. Of course, he is still in the process but it was good to finish 90 minutes in good rhythm and to score a goal for all strikers is important.”

Aguero had to start somewhere, of course, but this will need to be the beginning of a strong upturn in form with meaningful games running out to prove he can remain at the vanguard of what is shaping up to be a new dynasty under Guardiola.

It is yet another testament to the City manager’s coaching prowess that he has re-established their domestic pre-eminence by methods aside from transfer market power: Ilkay Gundogan‘s deployment in a more advanced position, Joao Cancelo‘s reinvention as a full-back/midfielder, the use of a false nine to assert midfield dominance against certain opponents.

That latter tweak was in part informed by Aguero’s unavailability. Jesus has struggled with his fitness this season, too; this was the first time the Brazilian and Aguero have started together since February 2020.

They now have 24 goals from 13 league starts together, a sign of their past potency and a record Aguero will be looking to extend in the weeks ahead.

Aguero is a City legend whatever happens, his 257th goal of an illustrious career the apotheosis of which will probably always be that stoppage-time winner against Queens Park Rangers in May 2012 to seal their first league title in 44 years.

“Sergio is maybe the legend,” Guardiola said. “Sometimes when I review the goal that won the Premier League for [Roberto] Mancini [in 2012], it is something special. He is a lovely person and what he has done … we are going to decide the best for both sides.”

Consequently, he should not be written off lightly despite turning 33 in June, and with a contract expiring this summer. There are murmurings that Aguero has become frustrated at a bit-part status of late having been fit to start well before Saturday’s game. He is probably not alone in wanting more game time: Guardiola has now made 94 changes to his starting lineup this season, more than any other manager in the division.

City are likely to enter the scramble for Borussia Dortmund forward Erling Haaland should he become available this summer, a move which will likely hasten Aguero’s departure.

But Aguero insisted in a Twitch interview this week that talk of a move to Barcelona was premature while Guardiola claimed he “will think about” a new contract “when the international break starts and I have more time.”

The Argentine striker needs to seize every opportunity. He was undoubtedly a little ring-rusty here and not helped by City lacking their usual fluency in the first-half.

Aguero dropped deep at times to help link the play with Guardiola opting for a three-man defence supported by wing-backs Cancelo and Benjamin Mendy also aiming to provide attacking width.

With Gundogan and Kevin De Bruyne on the bench, City were a little disjointed and Aguero found himself on the periphery. He ended the half with just 16 touches, the same number as City goalkeeper Ederson and the fewest on the pitch bar Fulham winger Ademola Lookman.

City were struggling to move the ball with sufficient speed or incision to unsettle Fulham and so it will infuriate Cottagers boss Scott Parker no end that their resistance was broken from a set-piece just after half-time, triggering a blitz of three goals in 13 minutes.

Cancelo swung over a free kick and Stones poked the ball into the net. If the opening goal was maddening, the second was comical. Joachim Andersen tried to clear the ball but only succeeded in hitting Ivan Cavaleiro, ricocheting straight into Jesus’ path. He rounded Fulham goalkeeper Alphonse Areola before smashing the ball into the net.

Jesus was then fouled in the box by Tosin Adarabioyo — a City academy graduate — giving Aguero the chance to get on the scoresheet, ending his barren run. He completed 90 minutes for the first time in 13 months with 37 touches, the fewest of any City starter.

Guardiola’s side remain in with a chance of a remarkable quadruple trophy haul this season. They seem almost certain to be celebrating on at least one front. Whether it proves to be Aguero’s swansong or the start of another chapter remains unknown.

How to watch European soccer this season: Your guide to must-see games, teams, players
Ranking every Premier League transfer ever between the Big Six clubs
Euro revenues up 10% in 2020-21 despite COVID
Which clubs make the most profit in the transfer window?
Sources: Man United target Atleti forward Cunha