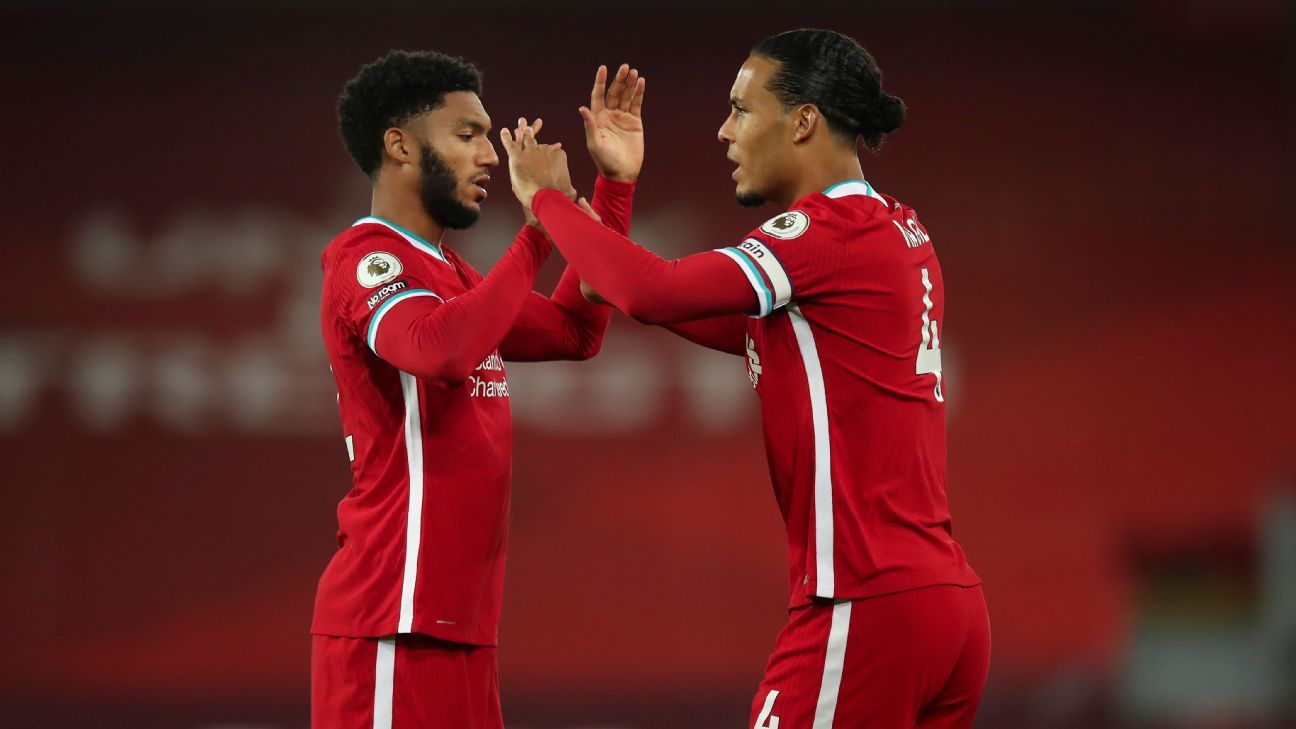 The two players suffered long-term knee injuries which ruled them out of the majority of the campaign and, despite Liverpool initially coping as they battled to retain their Premier League crown, they are on a run of six consecutive defeats at Anfield.

– Stream LIVE games and replays on ESPN+ (U.S. only)
– Euro 2020: Will the tournament go ahead? Will fans be allowed?

Van Dijk was expected to captain Netherlands in their first major tournament since the 2014 World Cup while Gomez was in contention to start in central defence for England, but Klopp has cast doubt on their availability of both players.

“That’s not my decision,” Klopp told a news conference ahead of Monday’s game with Wolverhampton Wanderers, when asked if the pair playing in the Euros would benefit Liverpool.

“But, to be honest, the information I have in the moment [is] it will be unlikely. So, not that I don’t let them go because I don’t want to have to do that anyway, but it’s because of the extent of the injury. We all hope that they will be ready to start the preseason with us. That’s what we hope.

“The two of them look in the moment better than Joel [Matip] it’s pretty much the same, he’s just not qualified for the Euros but it’s with him the same. These are really serious injuries. And it’s not about now that we talk [about] which competition they can play. As far as I know, and I’m always open for positive surprises, now they all of a sudden show up in team training, but nobody told me that.

“The two of them look in the moment better than Joel looks because he’s still in his [what] looks like skiing boots. But he is here as well. Joe is not running, Virgil is already running, but this is really a tough one.

“We are completely over the moon when they are ready to train with us for the start of preseason. About the Euros, I didn’t think about it.

“I don’t know when you would have to be back that you are able to play the Euros. The week before? The day when the Euros start? I don’t know. That’s it. I understand maybe the need of that but we cannot make this decision and we will not.

England’s Euro 2022 success is a platform for the next generation
Arsenal start PL season with 2-0 win over Palace
Bale, LAFC lose shootout to Club America
Who will lead USWNT defense at the World Cup? Does Vlatko know?
Henderson: Man Utd treatment was ‘criminal’