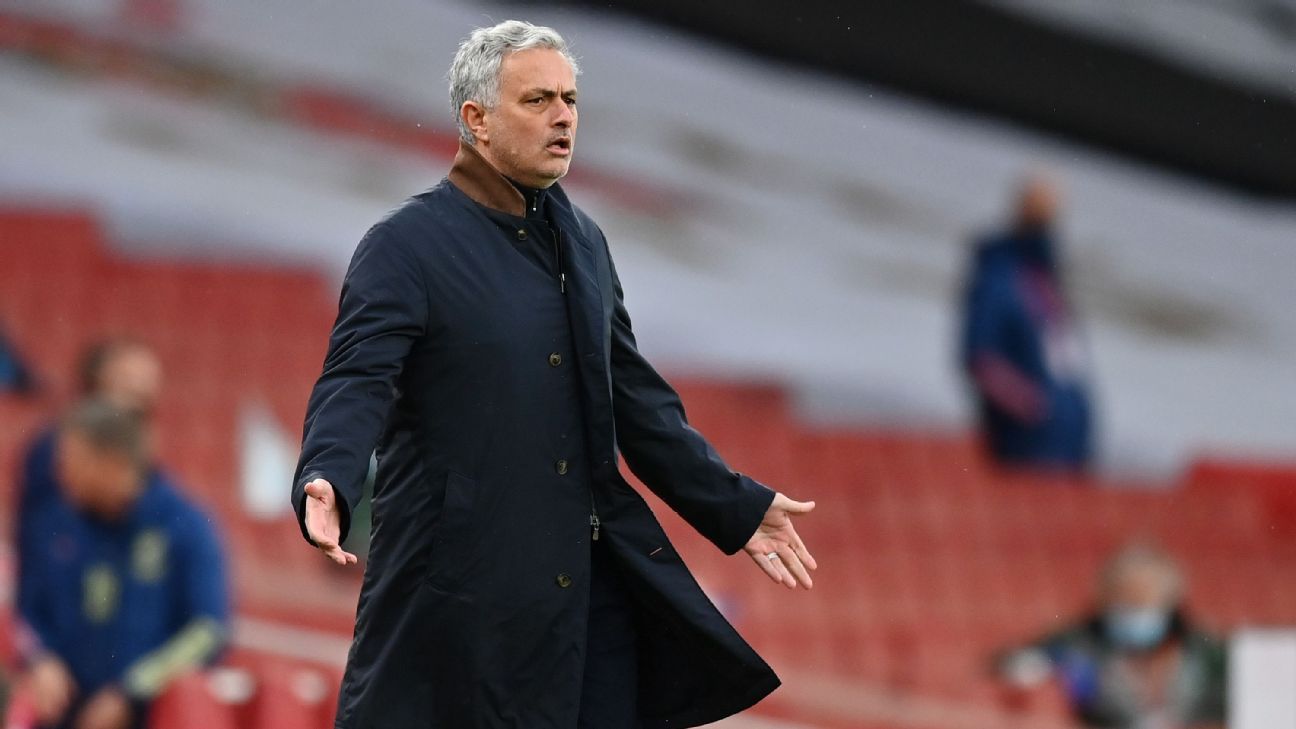 Tottenham Hotspur boss Jose Mourinho has accused his players of “hiding” and questioned whether referees were “tired” as Spurs lost 2-1 to Arsenal in Sunday’s north London derby.

Spurs were second-best for long periods at Emirates Stadium despite taking the lead through a stunning Erik Lamela 33rd-minute rabona.

Martin Odegaard equalised for the homes side on the stroke of half-time before Davinson Sanchez was adjudged to have fouled Alexandre Lacazette in the box, giving the France international the chance to slot home the winning goal.

Lamela was then sent off for a second yellow card with 14 minutes remaining.

Mourinho hauled Gareth Bale and Tanguy Ndombele off either side of the hour mark having already lost Heung-Min Son to a first-half hamstring injury, and in summing up the game he told Sky Sports: “No post-match interviews for referees? That is a pity.

“We played really bad in the first half. The 1-1 was not a fair reflection of the first half. We were poor. Defending bad. No intensity or pressing. Some important players hiding. Really bad. In the second half we only had space to improve which we did and then it is a question — but an impossible one as they don’t speak — for the referee Michael Oliver to answer.

Steve Nicol says Arsenal’s nervy finish vs. Tottenham will be forgotten because of the Gunners’ dominant display.

“Probably Paul Tierney too as he was the VAR. According to [fourth official] Kevin Friend, the referee told him he had a clear vision and the VAR does not want to go against.”

Lacazette appeared to slice his left-foot shot off target before Sanchez made contact but Oliver awarded Arsenal a penalty and the decision was checked by VAR.

“In the second half with 1-1, we felt we were controlling the game and we felt we could give a different step to try to win it,” said Mourinho. “Then the crucial action of the game arrives. I don’t want to call it a penalty because it is an offence to penalties.

“It was a mistake by Michael Oliver. Players get tired of so many matches. Coaches get tired. Maybe referees, they get tired. He had a game midweek? Maybe Champions League or Europa League? Maybe he is tired. Normally I am very unlucky with him because my record with him on penalties is astonishing. With Chelsea, Manchester United, Tottenham, it doesn’t matter the club. I am very, very unlucky with such a good referee.”