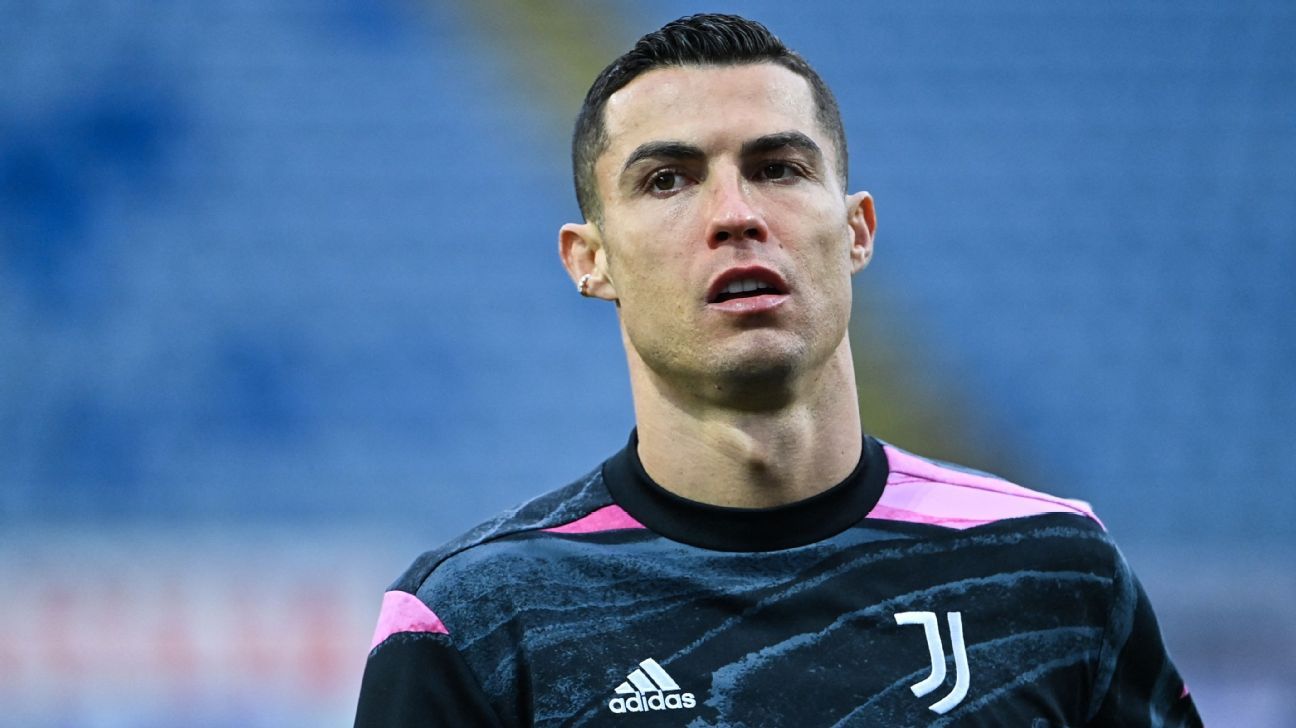 What’s next for Cristiano Ronaldo? It is the question being asked in Italy, Spain, France, England and even the United States as speculation continues to surround the Juventus forward and his club future.

Reports in Italy earlier this month suggested that Juventus, whose finances have been hit hard by the COVID-19 pandemic, are prepared to sell the rights to the 36-year-old for as little as £25 million this summer in an effort to get Ronaldo’s £28 million annual salary off the wage bill. But those stories are nothing new: The word within the game since the start of the season has been that Ronaldo is available for the right price.

Last week’s Champions League last-16 exit at the hands of Porto was another big blow to Juve’s money-making machine, and having signed Ronaldo from Real Madrid in 2018 as the final piece of the club’s plans to win that competition, the failure so far to deliver the biggest prize in the game has led to the prospect of him being moved at the end of the season.

Despite his age, Ronaldo continues to score goals at an incredible rate, with his weekend hat-trick against Cagliari taking his season tally to 30 goals in 33 games for Juve. It also took him to 770 career goals — three clear of Pele‘s tally of 767. At 36, with huge wages, Ronaldo arguably still offers value because of his goal output, so he will not be short of opportunities this summer. But what are those options likely to be?

ESPN has assessed the possible moves open to the five-time Ballon d’Or winner.

Ronaldo left the Bernabeu in 2018 as Real Madrid’s all-time leading scorer, with 450 goals in 438 appearances. When asked last week whether he would be happy to take Ronaldo back to Spain, Real coach Zinedine Zidane replied by saying that the player was “magnificent.”

From a football perspective, Real have been unable to replace Ronaldo’s goals since he left the club. Eden Hazard has struggled to make any kind of impact, and Zidane’s team could certainly benefit from the goals that Ronaldo would deliver, even at 36. But Real are also desperately trying to reduce their wage bill by clearing out high-earning players in their 30s such as Gareth Bale, Sergio Ramos and Luka Modric. Bale, on loan at Tottenham this season, still has a year to run on his £600,000-a-week contract.

Clearing financial space to make way for Ronaldo would make little sense, but with Lionel Messi seemingly heading for the exit door at Barcelona, there would be an obvious appeal to Real to bring back their former superstar at a time when Barca are losing their best-ever player.

Real could justify the move for both football and commercial reasons. It may not make financial sense, but Real always seem to find the money when they need to, meaning a return to the Bernabeu should not be discounted.

It has been 12 years since Ronaldo left Old Trafford in a then-world-record £80 million transfer to Real Madrid, but United have made numerous attempts to lure him back to the club ever since. Some overtures were more serious than others, particularly in 2013 and 2014, but the stars never quite aligned and his move to Juventus three years ago seemed to draw a line under the prospect of Ronaldo returning to United.

Yet United are a club in need of a centre-forward this summer and, if attempts to sign Borussia Dortmund‘s Erling Haaland prove unsuccessful, Ronaldo would be a compelling alternative.

On the pitch, Ronaldo is still making a big contribution at Juventus, so United could expect at least one good season out of their former player and the cost of the deal is relatively inexpensive at £25 million. Ronaldo’s wages would be high, but United would exploit his return to the max from a commercial perspective.

With Paul Pogba‘s future uncertain, United could take Ronaldo as part of any deal for the Frenchman to return to Juventus and ensure they swap one big name for another. Similarly, if Messi ends up at Manchester City, Ronaldo may find it impossible to resist a return to United so he can play out the final chapter of his rivalry with the Argentine in the Premier League.

In short, don’t rule it out, especially if United’s owners, the Glazer family, regard Ronaldo as having the same profile as Tom Brady, whose move to the Tampa Bay Buccaneers (also owned by the Glazers) helped them win the Super Bowl.

Whenever a star player becomes available, PSG are always in the running, and it’s no different with Ronaldo, but things in the French capital are fluid at the moment.

If the French champions can retain the services of Neymar and Kylian Mbappe, the prospect of a move for Ronaldo would be slim. Due to the financial impact of the pandemic, interest in both Neymar and Mbappe has drastically diminished, and there may be no market for either. Barcelona want Neymar and Real want Mbappe, but it’s doubtful either club could find the money.

But just as they are in the chase to sign Messi from Barcelona, PSG are also interested in signing Ronaldo. If Neymar and Mbappe are tempted away from Parc des Princes, PSG could even attempt to pair Messi and Ronaldo together in a Parisian dream team. Right now, though, there are too many “what ifs” at PSG for the club to be regarded as a likely option for Ronaldo. They are there, in the background, but much needs to happen for Ronaldo to end up in Paris.

The Futbol Americas crew discuss whether Cristiano Ronaldo or Lionel Messi is more likely to move to MLS first.

Sources have told ESPN that a move to the U.S. appeals to Ronaldo, though likely as the final destination in his career. Yet if Ronaldo was to give any indication of being open to a move to MLS this summer, Inter Miami would automatically jump to the front of the line due to the ambition of the team’s ownership group, which includes former United and Real star David Beckham.

Phil Neville, the Inter Miami coach, played alongside a young Ronaldo at Old Trafford and, in tandem with Beckham, would have a personal connection with Ronaldo to help swing a deal. LA Galaxy and LAFC would also likely be interested in signing Ronaldo given that they can offer the appeal of the Los Angeles lifestyle, but the majority of MLS teams would have no chance of being able to finance a deal for the 36-year-old.

Location and climate will be key: Ronaldo could never get used to the weather in Manchester, so don’t expect him to move to Kansas or Minnesota.

Ronaldo has a year to run on his Juventus contract, so the reality for all concerned is that he will only move if it suits him. He may not have won the Champions League with Juve, but he’s nonetheless won Serie A in each of his two full seasons and scored 95 goals in 122 appearances. His time in Italy has been a success and he does not need to move either for money or a less challenging league.

But if he feels as though he isn’t wanted in Turin, then the appeal of a return to Madrid or Manchester, where he would be idolised and well-paid, may persuade him to leave Juventus.

All of the cards are stacked in Ronaldo’s favour right now. Real and United would both find a way to sign Ronaldo if he made it clear that he was open to return to either club, while staying at Juventus would enable him to leave as a free agent in 2022.

If he does that, at the age of 37, a move to MLS would be a genuine possibility, but if he’s to leave Juventus, the Italian champions will first have to sell the idea to Ronaldo himself.

Fabio Paratici, Juventus’ chief football officer, said last week that there are no plans to extend Ronaldo’s contract in Turin, although he stopped short of saying that the Portuguese forward could leave. Sources have told ESPN, however, that Juve would welcome a sale in order to be able to rebuild and allocate the Ronaldo salary elsewhere, so potential suitors will not be discouraged.

Right now, Real and United are the most likely destinations, but Ronaldo is not the priority for either club. It is a deal, though, that could be done once there’s a clear indication he is prepared to move.

As it stands, PSG have too many other issues to address, while it feels 12 months too soon for a move to MLS. So unless United or Real break cover and make a firm move this summer, another year at Juventus is the likeliest outcome.

Don’t rule out United or Real. In terms of a short-term fix and a commercial project, re-signing Ronaldo would work for both clubs.

100 days to 2022 World Cup: Why your team will (and won’t) win in Qatar
Van Dijk: Nunez must ‘control himself’ after red
England’s Wiegman, Mead up for UEFA award
Lewandowski’s watch stolen before Barca training
Casemiro intent on joining Man Utd – Ancelotti