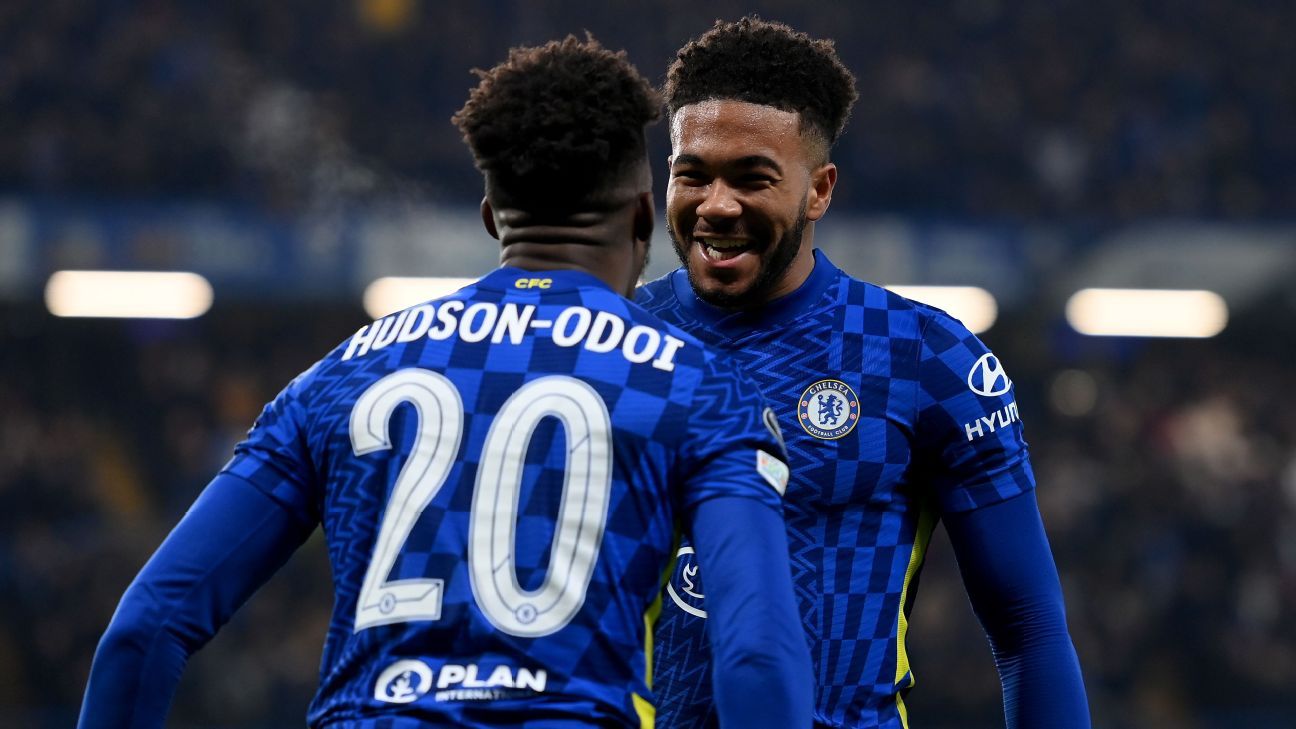 Chelsea claimed a thumping 4-0 victory over Juventus thanks to goals from home-grown trio Trevoh Chalobah, Reece James and Callum Hudson-Odoi and a fourth by Timo Werner to top Champions League Group H and cruise into the knockout stage.

European champions Chelsea took control from the outset and never relaxed as they booked their place in the last 16.

– Olley: Chalobah, James step up amid future defender uncertainty
– What every team needs to get out of their UCL group
– ESPN+ viewers’ guide: LaLiga, Bundesliga, MLS, FA Cup, more

Defender Chalobah, 22, smacked the ball into the net past the flailing arms of Wojciech Szczesny in the 25th minute after centre back Toni Rudiger set him up from a Hakim Ziyech corner.

A VAR check dismissed calls for handball against Rudiger when replays showed the ball hit his hand in front of his chest.

James, 21, showed superb technique to angle a shot into the left hand corner of the goal in the 55th and barely three minutes later 21-year-old Hudson-Odoi scored from a layoff by another Academy graduate Ruben Loftus-Cheek.

Juventus had already qualified for the knockout stage but the result dropped them to second place in the group, level with Chelsea on 12 points, with one round of fixtures to play.

Chelsea coach Thomas Tuchel was full of praise for his young scorers.

“It’s their biggest dream to perform at Stamford Bridge, to perform in blue, to be part of a strong Chelsea team,” the German said. “I strongly believe this is a huge part of the success that we have this mix.”

Werner put the icing on the cake before the final whistle by sending the ball home from a Ziyech cross.

Chelsea, beaten 1-0 in Turin in September, made the Italians look ordinary, running them ragged with intricate passing movements and producing 20 shots on goal to Juve’s eight.

Former Chelsea striker Alvaro Morata had the visitors’ best chance when he chipped the ball over advancing Chelsea keeper Edouard Mendy in the 28th minute, but 37-year-old defender Thiago Silva raced back to superbly hook the ball off the line.

Mendy pulled off a save of his own late in the second half, tipping the ball over the bar from a Weston McKennie shot.

Szczesny saved Juventus from utter humiliation with a series of fine stops, pushing the ball round the post from efforts by Hudson-Odoi and James as well as keeping out Ziyech and Ben Chilwell.

The one downside for the hosts was an injury to wing-back Chilwell, who appeared to twist his knee and was helped off the pitch.