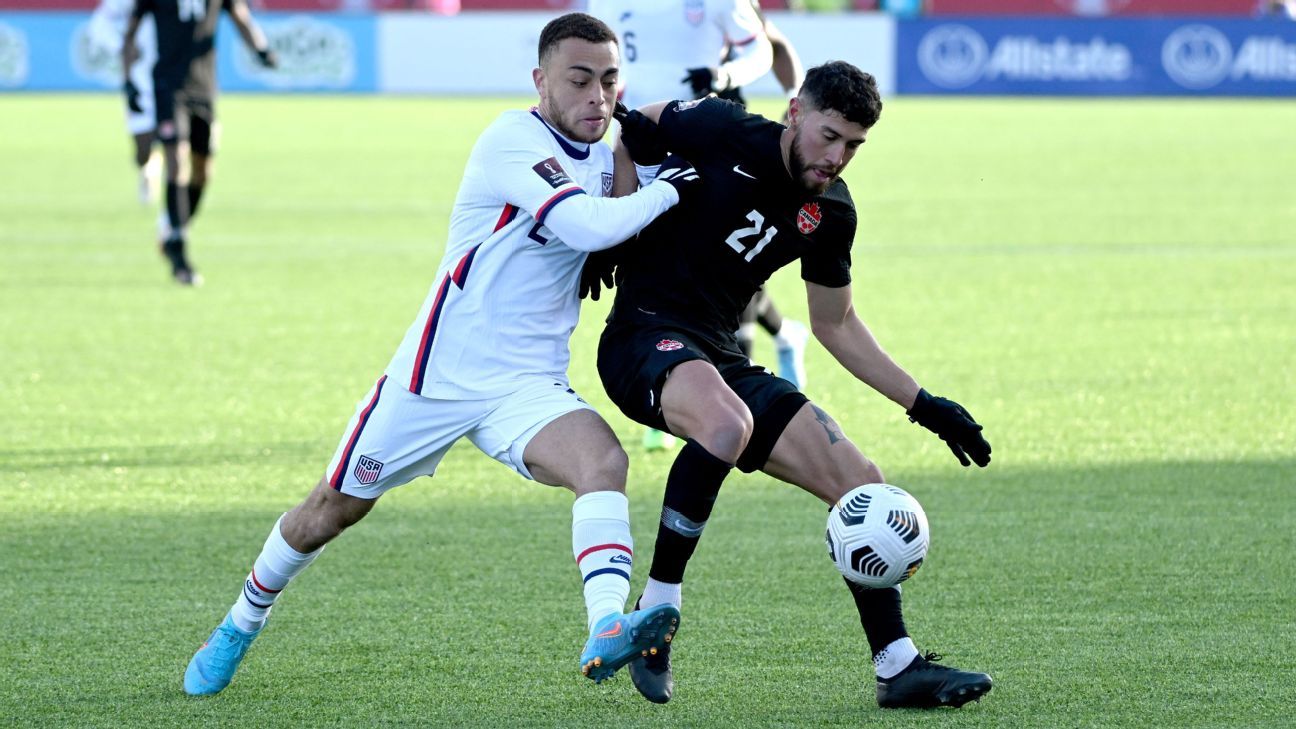 Cyle Larin scored in the seventh minute and Samuel Adekugbe clinched the result in the final seconds of stoppage time to give the Canadians the three points at Tim Hortons Field in Hamilton, Ontario.

“It’s hard for me to remember a performance away from home this dominant without getting a result.”

The United States out-possessed Canada (63% to 37%) and had more shots (13 to 8), but it was the Canadian side — perfectly content to concede possession and attack the U.S. on the counter — that created the more dangerous goal-scoring chances. Canada tallied 1.17 xG to 0.94, according to ESPN Stats and Information.

It was Canada’s first win against the United States in World Cup qualifying since 1980 and one provides plenty of breathing room atop the CONCACAF standings. With four matches to play, Canada has 22 points — four points ahead of the United States, which came into the day a point ahead of third-place Mexico.

After starting Jesus Ferreira against El Salvador on Thursday, Berhalter turned to Gyasi Zardes — who he coached at the club level with the Columbus Crew — at striker, but the move didn’t pay off. Zardes didn’t register any of the Americans’ three shots on target and was replaced by Ricardo Pepi in the 69th minute.

“That was an easy one,” Berhalter said, when asked why Zardes started. “We knew what the game was going to look like. We knew it’s a very narrow field, small field. We knew it was going to be a very physical game and we thought that Gyasi would give us that physicality. And from looking at his performance. I think he did that. Again, I don’t think we got him enough service in the box to get him dangerous.”

Despite playing on the narrow turf field in Hamilton, Ontario, the United States still elected to play the ball down the sides and send in crosses.

“It probably has the width of Yankee Stadium and we’re playing on a very poor field turf,” Berhalter said. “So that also translates into some difficulties in processing and creating chances, but that’s not an excuse. We still want to be better in front of goal.”

Canada’s physical approach was something Berhalter said did not impact the way his team played.

“They couldn’t handle our physicality. That’s plain and simple,” Berhalter said. “We were running them all over the pitch and when you look at duels won, when you look at our pressing — they had a very, very hard time dealing with what we were giving them.”

According to ESPN Stats and Information, Canada won 50.7% of the duels in the game.

The United States will fly to Minnesota Sunday in advance of Wednesday’s game against Honduras.

USWNT’s win over Colombia can’t mask struggles in front of goal
Which players have impressed at the men’s U19 Euros?
Angel City, Mexico women set Sept. 5 friendly
Club America sign Mexico’s Araujo, Damm
Big questions for women’s Euros: England or Spain to win it all? Or will Netherlands, Germany go on a run?