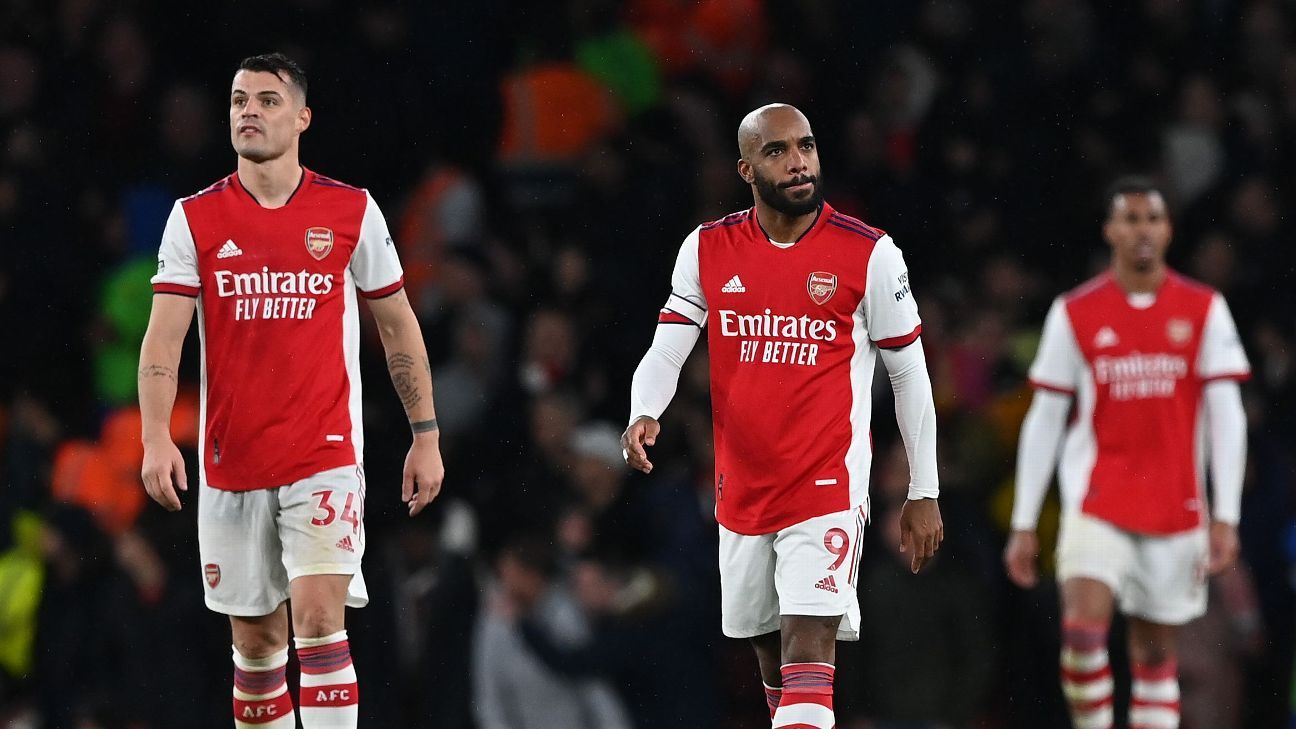 The Premier League is over for another season. The prizes have been handed out, the tickets to Europe delivered and passports to obscurity in the EFL rubber-stamped.

And with it, we draw the curtain on the third season of VAR, and with it another 38 rounds of controversy and arguments over refereeing in England’s top flight.

This season we logged all VAR decisions across the Premier League, and calculated how they might have affected the outcome of games.

And the final table shows some crucial changes.

Who won the title? Did Tottenham still make it into the Champions League? And did Manchester United get the best of VAR? Also, could one of the strugglers have stayed up without those crucial VAR calls?

Our calculation is not just about the number of times a team gets a favourable VAR call, or about how many goals are affected. What’s more important is when these VAR decisions take place, how they might have changed the course of the match and, crucially, whether that impacted upon the final scoreline.

ESPN brings you the VAR Effect Table. We’ve taken all 120 VAR decisions in the Premier League and worked out an alternative table, showing who the true winners and losers are.

How we work out the VAR Effect Table

We take only the first VAR overturn in each game, because the calculation considers that any subsequent VAR incident wouldn’t have happened and the whole direction of the game has been altered. (Think of it like a Marvel timeline, or the plot of any time travel movie.)

The VAR decision is then reverted to the original on-field call — so if a goal is disallowed for offside, it’s given as a goal.

If a penalty has been cancelled, it is considered to have been awarded and scored, unless the team in question has a penalty-conversion record of 50% or below over the season. For instance, Burnley and Watford missed half the spot kicks they were awarded, with Brighton on 57.1% and Man United on 60%. If 50% or below, a penalty may be judged to have been missed.

If a team has been awarded a goal through a penalty or an incorrect offside through VAR, the goal is disallowed.

We then took into account a series of factors before settling on a predicted outcome:

Team form: Results in the previous six matches give an indication of how a team has been playing generally.

Time of incident: For instance, if an incident happens late in the game, it’s less likely that the scoreline would change again after this point.

xG at time of incident: This allows us to take into account which team has been creating the better chances and is in the ascendancy.

Team strength: As well as form, a team’s general strength plays a part. This factors in league position, and a team’s goal-scoring and defensive records across the season.

Impact of incident: For example, a red-card decision being reversed may change the outcome of a match.

These results were then used to modify the table and work out what impact VAR has had on teams’ positions this season, with the arrows indicating if their league position is better or worse without VAR. 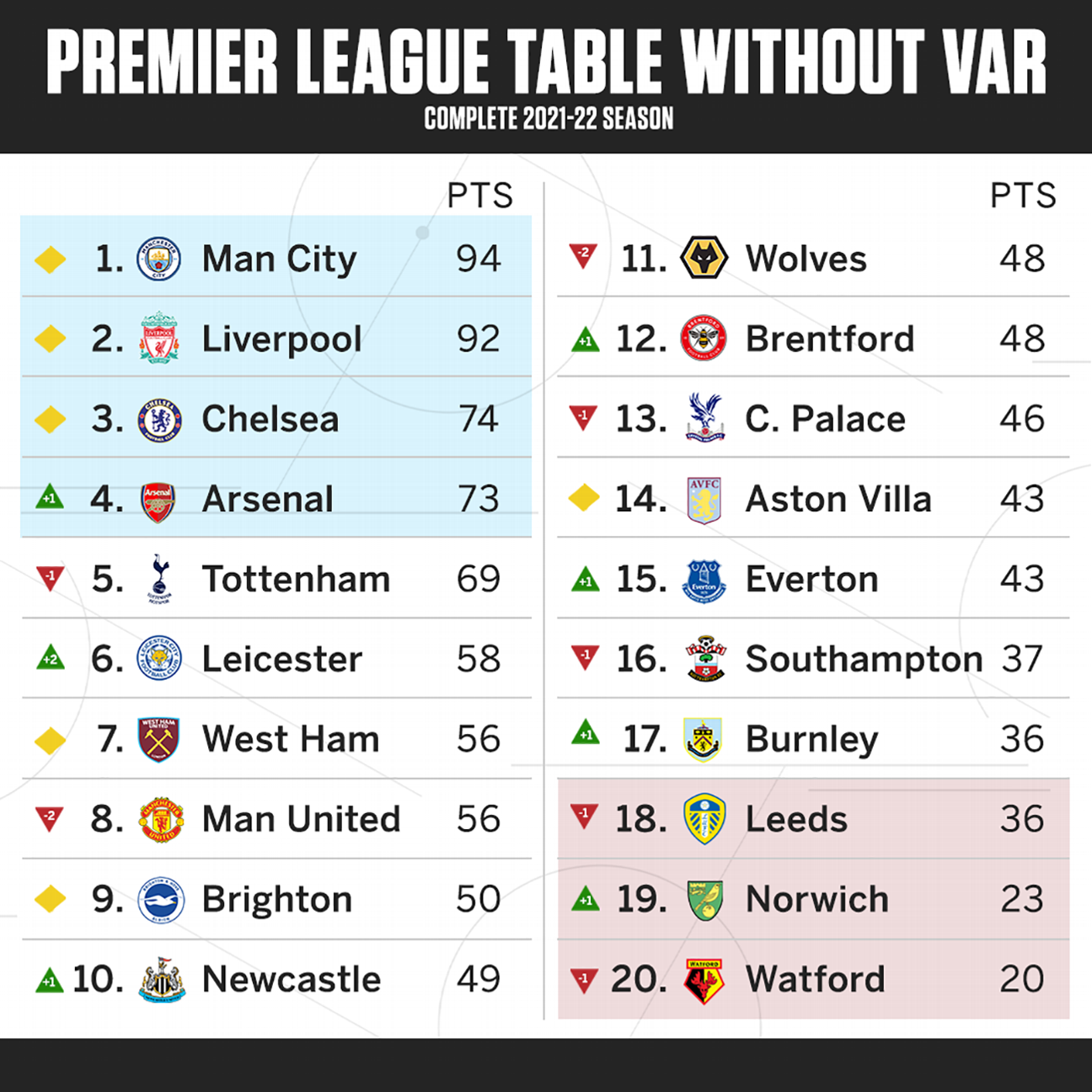 The big winners without VAR

Arsenal suffered Champions League heartbreak at the hands of arch-rivals Tottenham Hotspur, pipped on the final day. But it could have been a different story without VAR.

Arsenal gain four points across the season, while Spurs were one of the biggest losers without VAR and drop two points. That six-point swing sees the Gunners finish in fourth, a comfortable four points clear of their neighbours. The race for the Champions League wouldn’t even have gone down to the final day.

In a quirk of VAR, only West Ham had more VAR decisions in their favour than Arsenal, yet it’s when the negative decisions came that really hurt Arsenal.

Two in particular changed the course of key matches. Arsenal were 1-0 up at home to Manchester City on New Year’s Day when a VAR decision gave the visitors a penalty. That goal changed the course of the game and led to a City win; the VAR Effect Table has this as an Arsenal win. The second decision came in a home loss to Brighton, with a Gabriel Martinelli goal disallowed for offside when Arsenal were 1-0 down in the 45th minute; again this is calculated as a win for Mikel Arteta’s men.

The overturns that went for Spurs’ include Everton‘s cancelled penalty at Goodison Park, in a game which finished goalless, and a spot kick awarded to Antonio Conte’s men at home to Burnley when the score was also 0-0. Added to that, Spurs had a Harry Kane offside goal allowed in what became a 3-2 win at Newcastle. That said, they did have decisions go against them, such as Kane’s goal ruled offside in the draw at Southampton.

Arsenal might consider themselves hard done by, but it is in fact Leicester City who gain the most points without VAR calls. The six points gained by the Foxes catapults them up two places from eighth to sixth, and a spot in the Europa League. That comes at the expense of Manchester United, who like Spurs gained two points from VAR and drop out of Europe completely.

Leicester were 1-0 up away to Newcastle when the VAR overturned a disallowed Bruno Guimaraes goal as the Magpies went on to win 2-1, while Brendan Rodgers’ men also had an Ademola Lookman goal chalked off for offside in a draw at Leeds United.

Among the decisions to go Man United’s way were a late winner for Everton ruled out for offside, and a red card shown to Brighton’s Lewis Dunk at Old Trafford when United were 1-0 up but the Seagulls in the ascendancy. Most importantly, there was the disallowed late winner for Leicester at Man United for a Kelechi Iheanacho foul, which effectively enabled the points swing between the clubs.

Of the other teams to receive points without VAR, Brentford gain two to finish 12th, while Burnley, Manchester City and Norwich are all one point better off.

As Liverpool‘s final points tally is unchanged on 92, it means Man City win the Premier League by two points rather than one.

In the first half of the season Newcastle United were one of the biggest winners without VAR, but decisions have evened themselves out since and the Magpies are now on the same points.

West Ham United had 10 VAR decisions in their favour, more than any other club, but their points tally is unaltered, as is Chelsea‘s. 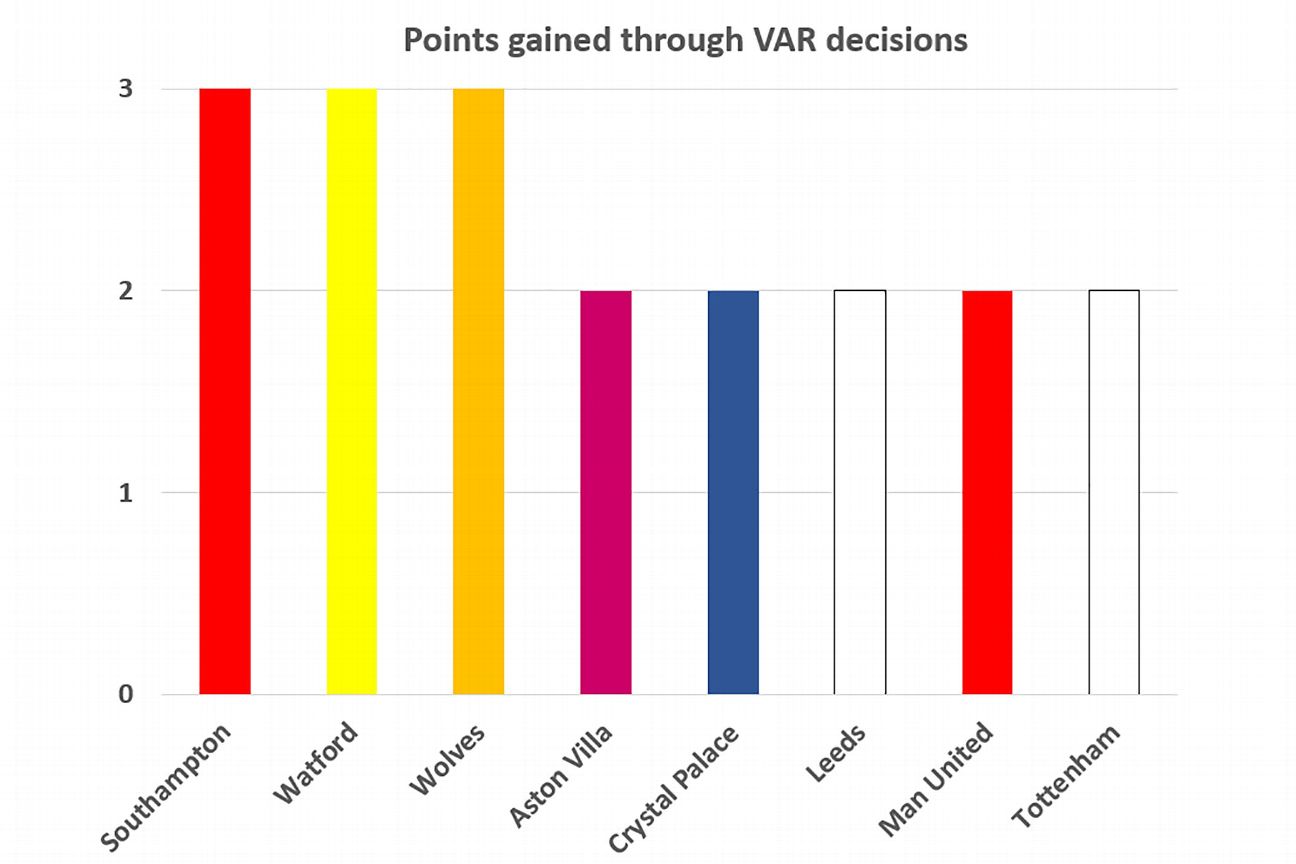 The big losers without VAR

Leeds United celebrated survival on the final day with victory at Brentford, but they might have VAR to thank for retaining their Premier League status — because the VAR Effect Table shows them relegated.

A couple of factors come into play here as Leeds lose two points without VAR. First there’s the home draw with Leicester which goes down as a loss, then the an injury-time penalty given to Leeds against Crystal Palace when the score was goalless; two of the key calls which went the way of the Yorkshire side.

Added to that, Burnley also gained one point, and among a series of VAR decisions was the second-half Burnley penalty revoked when the Clarets trailed 1-0 against Arsenal. That three-point swing is enough to put the clubs both on 35, and Leeds finish in the bottom three on goal difference.

It was a close call for Southampton, too. The Saints are three points worse off without VAR, the joint-most along with relegated Watford and mid-table Wolverhampton Wanderers. The loss of those points left Southampton hovering just a single point above the relegation zone. It could have been a much closer call but for decisions like the late equalising VAR penalty at Newcastle when they seemed destined for a 2-1 defeat.

Even though Wolves finished with more VAR decisions against them than in their favour (-2 net), the timing of these calls means they actually lose two points without VAR. costing them a place in the top half of the table.

Watford, meanwhile, slump to rock bottom as they suffer a four-point swing with Norwich City. Norwich had 11 VAR decisions against them, more than any other team, but such was the nature of their poor form they were only a single point better off without VAR. 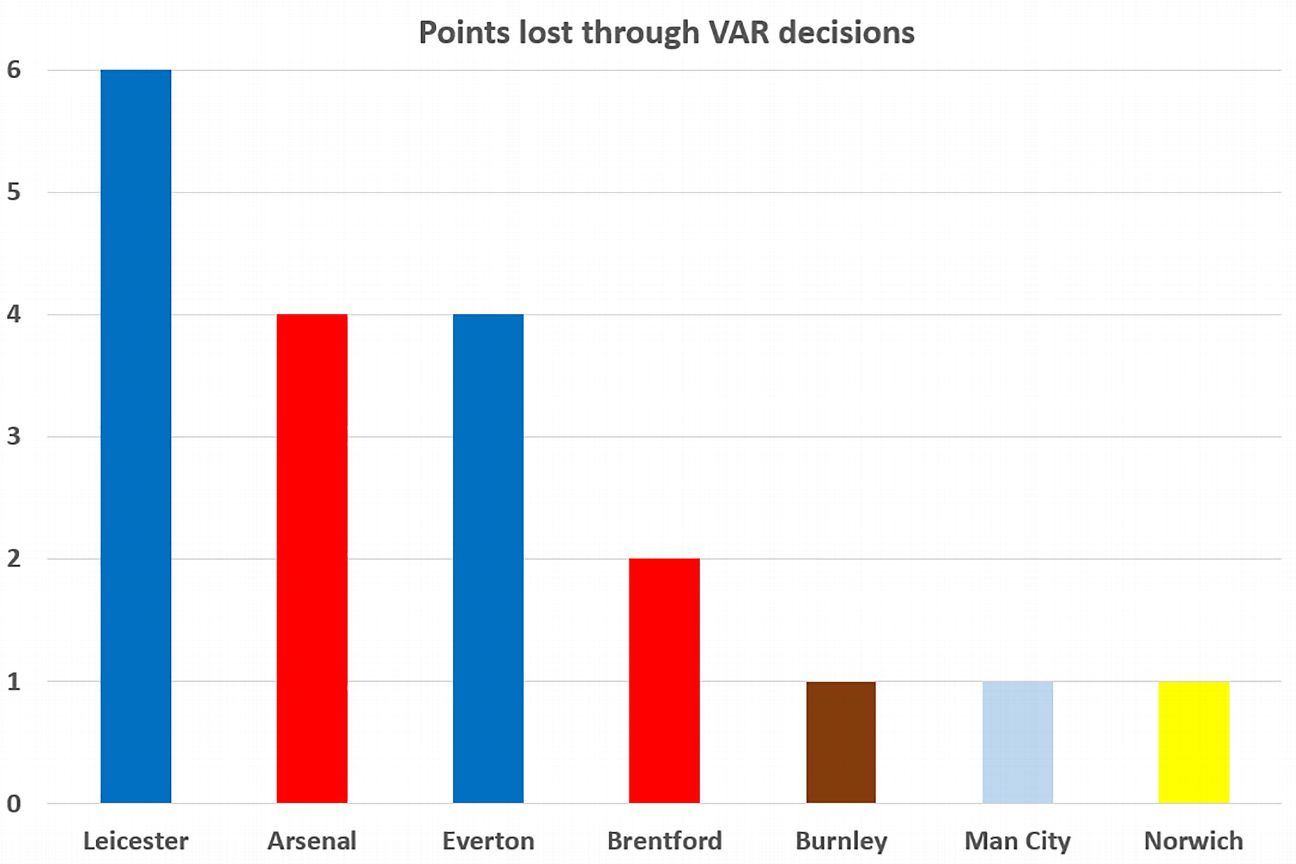 As well as Leeds, Man United and Tottenham, there’s also a two-point loss for Aston Villa and Crystal Palace, while Brighton & Hove Albion lose one point.